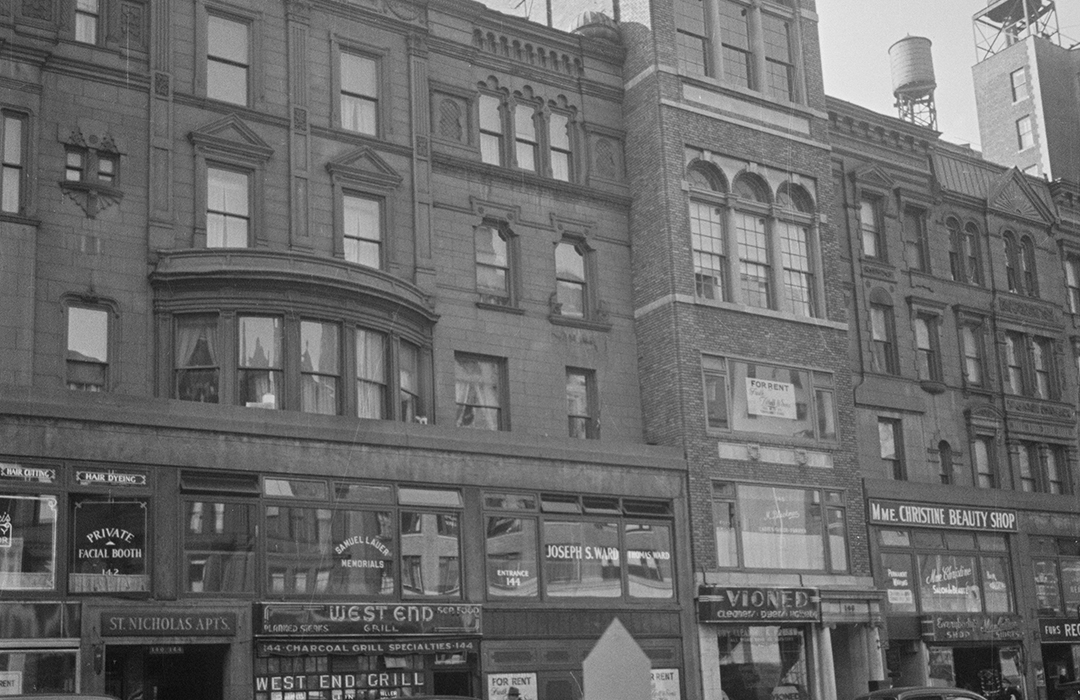 In 1884, the prolific architectural firm of Thom & Wilson designed a long row of brownstone-faced houses along the southern side of West 72nd Street between Broadway and Columbus Avenue for developer George J. Hamilton.  The construction cost of each of the four-story homes was estimated at the equivalent of about $645,000 in today’s money.

Among the row, completed in 1886, was 146 West 72nd Street, which stood out from its architectural siblings.  Thom & Wilson lavished the façade with exotic Moorish motifs like blind keyhole arches and two brawny dome-like ornaments atop the cornice.

The house became home to Henry J. Braker, the wealthy principal of the Braker Castor Oil Company and president of the Knoxville & Bristol Railroad.  His affluence was put on display when he became irked at the city’s management of the Sixth and Eighth Avenue streetcar lines.  On April 8, 1897, The Sun reported that Braker’s attorney had notified the mayor, the comptroller and other city officials that he “was willing to pay $1,000,000 each for the franchises.”  (That figure would be more than 31 times as much today.)

Braker sold 146 West 72nd Street in February 1901.  It was resold to Dr. Herman Clay Frauenthal in March 1902 for just over $1.3 million by today’s standards.  Frauenthal was a physician, as was his brother, Henry William.  On December 4, 1904, they founded the Frauenthal Clinic “in an endeavor to help the great number of poor suffering from deformities and joint diseases,” according to James J. Walsh in his 1919 History of Medicine in New York.   In 1907, this venture grew into the Hospital for Deformities and Joint Diseases, with Herman and Henry as its heads.  (Herman’s wife, the former Minnie Rosenthal, was active in the facility, as well, serving as a patron of the Ladies’ Auxiliary.)

On December 4, 1904, they founded the Frauenthal Clinic “in an endeavor to help the great number of poor suffering from deformities and joint diseases”

West 72nd Street was an exclusive residential street and all of its residents had country homes.  The Frauenthals’ was in Elberon, New Jersey.  During the summer season Dr. Frauenthal moved his practice there, where many well-to-do families spent the warm months.

In 1911, while most New Yorkers were still traveling around town in horse-drawn vehicles, Herman Frauenthal had an automobile.  On the afternoon of April 26, 1911, his chauffeur “misunderstood the signal” of a mounted Central Park policeman, according to The Sun.  He “bumped” into the side of a Victoria in which Mrs. Herbert Parsons and Mrs. Henry flack were riding.  The article said, “They were frightened but not hurt.  The carriage was damaged somewhat.”  Dr. Frauenthal and the policeman helped them get into his automobile and took them home.

Later that year Herman Frauenthal would have to temporarily take over the running of the hospital on his own.  Henry sailed for Europe in August to marry Clara Heinsheimer, the daughter of Alfred Heinsheimer.  The wedding took place in Nice, France on March 26, 1912, and just over two weeks later, they sailed to New York.

Herman was a good friend of British sea captain Edward Smith, and it is no doubt through that relationship that the newlyweds booked passage on Captain Smith’s newest command, the RMS Titanic.   According to Frauenthal later, “the trip had been ideal” until they were awakened about midnight on April 15.  Initially no one was concerned, having been assured that the ship could not sink.  But soon, Frauenthal went back to the cabin and insisted Clara put on a life preserver. 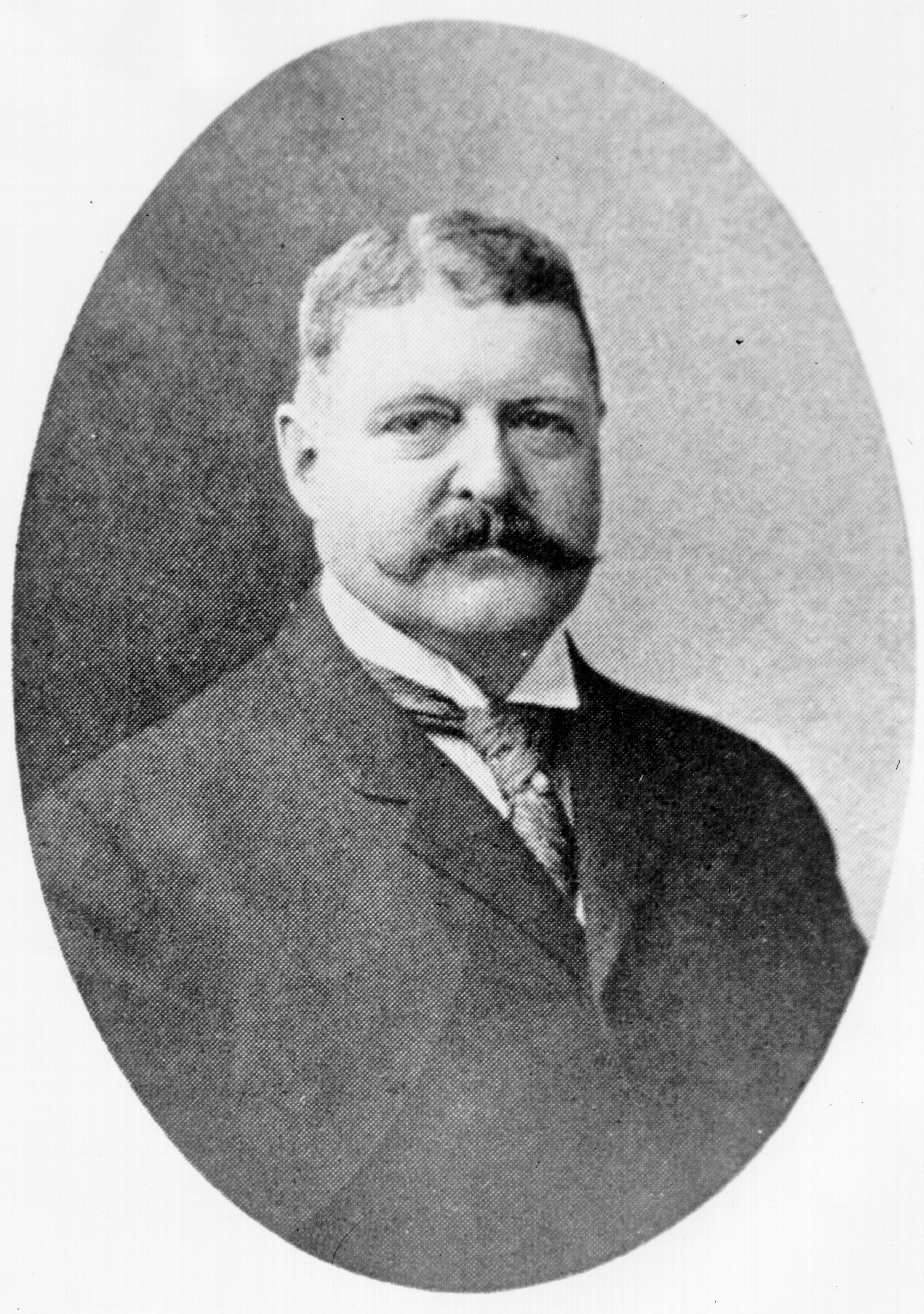 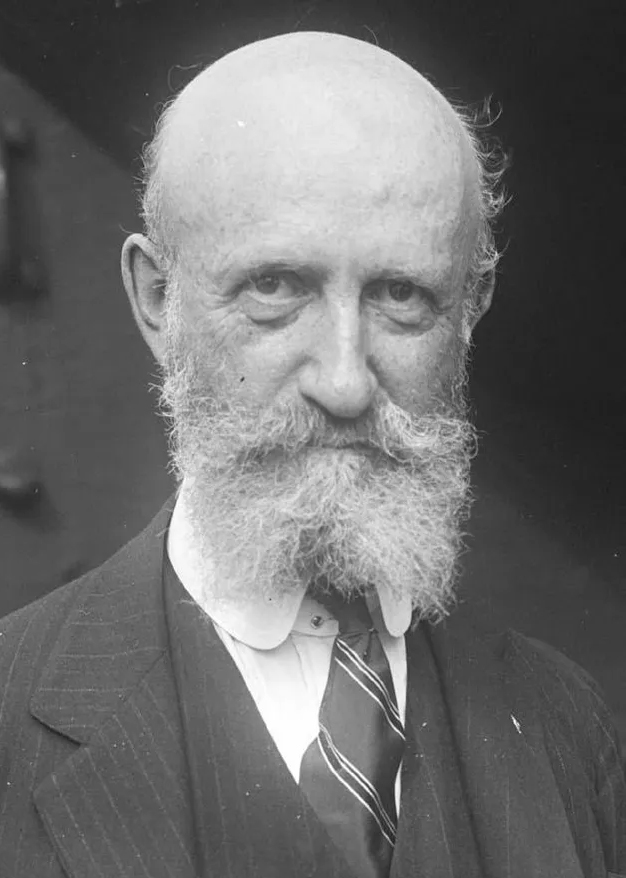 One can imagine the consternation felt by Herman and Minnie when they received word of the Titanic disaster.  On the night of April 18, they stood at the dock among the throngs as the RMS Carpathia steamed into the harbor.  The New York Press reported, “The first survivors of the Titanic to leave the Carpathia when that boat reached her pier last night were Dr. Henry W. Frauenthal and his wife…Several newspaper men made an effort to speak to the doctor, but he declined to answer any questions and hurried to an awaiting automobile and left for his brother’s home.”  The newspaper noted, “When the news came of his rescue it was said he possibly owed his life to his friendship with the captain.  As he declined to be interviewed at the pier it could not be learned just how he was saved.”

(Henry Frauenthal suffered mental health problems for the rest of his life, eventually committing suicide by throwing himself from his seventh-story apartment on March 11, 1927.)

At the end of World War I, the tenor of West 72nd Street had changed as apartment houses were replacing private homes and stores began appearing in former mansions.  Homeowners along the thoroughfare fled.  On December 20, 1919, the Record & Guide reported on six West 72nd Street sales that had taken place the day before, including Dr. Herman Frauenthal’s home.

“When the news came of his rescue it was said he possibly owed his life to his friendship with the captain.  As he declined to be interviewed at the pier it could not be learned just how he was saved.”

A renovation completed in 1921 resulted in the stoop being removed and replaced with a two-story commercial storefront.  The upper three floors were converted to non-housekeeping apartments—meaning they had no kitchens.

The real estate office of J. Philips & Co. had been next door at 148 West 72nd Street since 1919.  In April 1925, it announced it had leased the ground floor space of 146 West 72nd Street “and will upon completion of necessary alterations merge that space with their present office.”

By the mid-1960’s one of the commercial spaces was home to Windsor Camera Exchange.  It would remain until 1983, replaced by Snapshop Photo.  In the meantime, Off Shoots, a children’s apparel store, occupied the other space by 1977.

In 1988, Mrs. Stahl’s Knishes opened a Manhattan branch of its Brighton Beach and Coney Island Avenue stores.  It had been a Brooklyn destination since 1935.

The nondescript storefronts give the passerby no reason to notice 146 West 72nd Street.  But a glance at the top three floors reveals the exotic 1886 façade still intact (albeit without the wonderful domes).

Shop local to support the businesses currently at 146 Columbus Avenue: