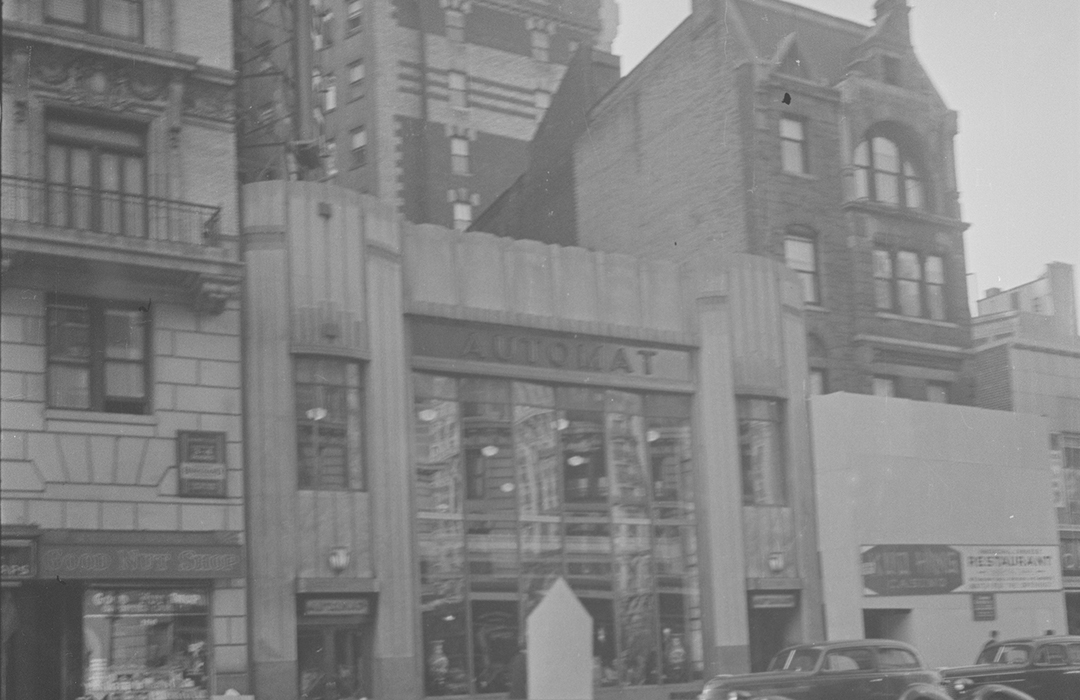 Joseph Horn and Frank Hardart opened their first restaurant in Philadelphia on December 22, 1888.  When “waiterless restaurants” began to appear overseas around the turn of the century, Frank Hardart traveled to Europe to see them in action.  Customers chose food items from glass-doored compartments, inserted a coin and removed the food.  The concept required fewer personnel and, therefore, reduced prices.  Diners enjoyed quick service and inexpensive meals.

Horn & Hardart brought the concept to the United States.  The result was a sensation and in 1912 they branched into New York City.  Shop girls, office workers and laborers found they could stretch their meager pay in clean, attractive surroundings where five cents would buy tasty, freshly-made food.

The coin machines accepted only nickels and women “nickel throwers” were on hand to make change.  Because the coins dirtied the cashiers’ hands, they work black uniforms.

Despite the low food prices, Horn & Hardart did not scrimp on the interiors.  Marble, white tile and shining chrome were kept spotless and the cafeterias were often termed “classy.”  Joseph Horn’s approach to the restaurant business was simple.  “There is no trick to selling a poor item cheaply.  The real trick is to sell a good item cheaply.”

Originally the firm used the Philadelphia architects Stuckert & Sloan to design the cafeterias.  But in 1916 it turned to local firm F. P. Platt & Co. for its New York projects.  Frederick Putnam Platt took his brother, Charles Carsten Platt, into his architectural business around 1919, creating F. P. Platt & Bro.  The brothers would design numerous automats for Horn & Hardart and as the Jazz Age engulfed Manhattan, their designs turned to the sleek and modern Art Deco.

The coin machines accepted only nickels and women “nickel throwers” were on hand to make change.  Because the coins dirtied the cashiers’ hands, they work black uniforms.

In 1930 Frederic co-wrote an article in the Architectural Record entitled “Restaurants,” which laid out the fundamentals of designing a viable food selling establishment.  Later that same year, in November, Walter J. M. Donovan leased the properties at Nos. 170 and 172 West 72nd Street to the Horn & Hardart Company.  The lease, which ran from January 1, 1931 to April 30, 1952 totaled $600,000.  On December 24, 1930 Poor’s Cumulative Service announced “In 1931 [Horn & Hardart] will erect there a new cafeteria.”

Indeed, if the Great Depression had any effect on the automat business, it increased it.  The quick and inexpensive food offered by Horn & Hardart was helpful to patrons who needed to account for every nickel.  When the cafeteria opened in 1931 the West 72nd Street neighborhood had changed from one of high-end private residences to apartment buildings and rooming houses.

The Horn & Hardart cafeteria quickly became a neighborhood gathering place.  Bachelors found eating here convenient and economical.  And apartment dwellers could sit for hours discussing illnesses, weddings and neighborhood gossip, or the achievements of a son or grandson.  The purchase of a cup of coffee and, perhaps, a slice of pie, afforded the customer the right to settle in to read the newspaper undisturbed. 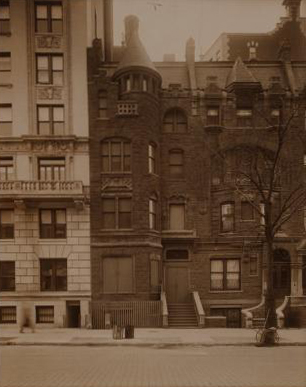 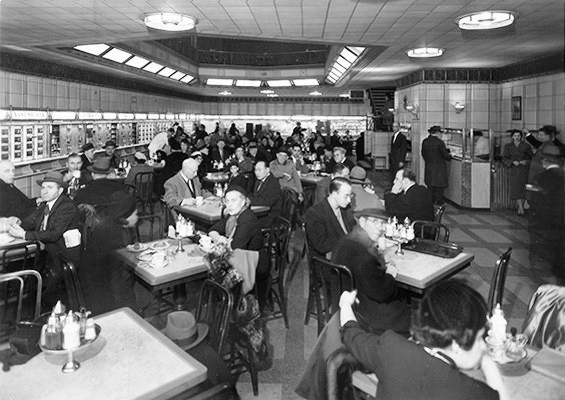 The two-story cafeteria could accommodate at least 200 patrons; so, of course, things did not always go especially smoothly.  Such was the case on the evening of August 9, 1936.

Claire and Elaine Luzanzie were sisters who lived together in the Washington Towers Hotel at No. 2166 Broadway.  Elaine, at 28-years old, was two years older than her sister.  That Sunday night they walked to the Horn & Hardart on West 72nd Street for dinner.

Simultaneously, Mrs. Lucille Bradley entered the cafeteria.  She set her eyes on a delectable-looking slice of roast beef.  Unfortunately, Elaine Luzanzie spotted the same plate of beef.  Mrs. Bradley (at 45, she was significantly older), insisted she had gotten to the little glass door first.  Elaine, with her nickel poised, disagreed.  The dispute got out of hand and shocked patrons watched as Elaine landed a blow on Lucille Bradley’s lip.

The following day The New York Times ran a headline “Police Fail to Quell Roast Beef Dispute,” and explained that none of the three women had their anticipated dinners at Horn & Hardart that night.  Instead they were given summonses for disorderly conduct.  Although an ambulance was called and Lucille was treated for a lacerated lip, both of the Luzanzie sisters denied they had struck the woman.

The women appeared before Magistrate Murphy in the West Side Court the next morning.  He diplomatically found them guilty of disorderly conduct, but gave them suspended sentences.

When the lease on the 72nd Street property expired in 1952, it was renewed.  After two decades the cafeteria had become a neighborhood destination and a financial success.  And so it was crowded on the muggy evening of June 19, 1957 as the city suffered through a heat wave.  It was the eighth day in a row with temperatures topping 85 degrees.

As the patrons chatted and dined at around 5:00 that evening, the lights suddenly went out.  The prolonged heat indirectly caused a Consolidated Edison cable to burn out.  A sub-headline in The Times the day read “Romance at Automat.”  The cafeteria’s managers quickly placed candles on the tables in the street level dining room and closed off the mezzanine.  The newspaper opined “The customers seemed to enjoy the romantic touch.”

On the evening of September 17, those “old people” gathered for one last time.  In what The Times called “frail, uncertain voices,” they sang “Auld Lang Syne” and reminisced.  The reporter noticed a hand-written sing on one table, which read “Shame, shame shame.”

Neighbors were shocked and saddened when a sign appeared in the window toward the end of summer in 1967.  “To our patrons” This Automat will be closed the end of the business day on Sept. 17, 1967.  We thank you for your patronage.”

The Times lamented “For 36 years the Automat on 72d Street just east of Broadway had been the second home for the old people of the West Side.  Living alone on Social Security or pensions, they spent long hours over coffee at the Horn & Hardart.”

On the evening of September 17, those “old people” gathered for one last time.  In what The Times called “frail, uncertain voices,” they sang “Auld Lang Syne” and reminisced.  The reporter noticed a hand-written sing on one table, which read “Shame, shame shame.”

One patron, Ida Bess, told the journalist “I’ve come here for 15 years every evening.  Every evening.”

She was interrupted by Rose Katz.  “Fifteen years?  Thirty years I’m eating here.  If they go out of business, we need a nice restaurant like Horn & Hardart with fresh vegetables.”

The 72nd Street residents did not, however, get another nice restaurant quite like Horn & Hardart.  The cafeteria continued to house a restaurant on the first floor, including a Gray’s Papaya in the 1990s; while over the decades the upper floor was home to a business school, a “physical culture establishment,” and a billiards hall.

As the 20th century became the 21st, the entire building housed the Acker Merrall & Condit wine store.  More recently it was taken over as a Citibank branch.  Today the side entrances have been altered.  But the changes to F. P. Platt & Bro.’s sleek and jazzy design were sympathetically executed; leaving us with a streamlined reminder of the Automat Age in New York.