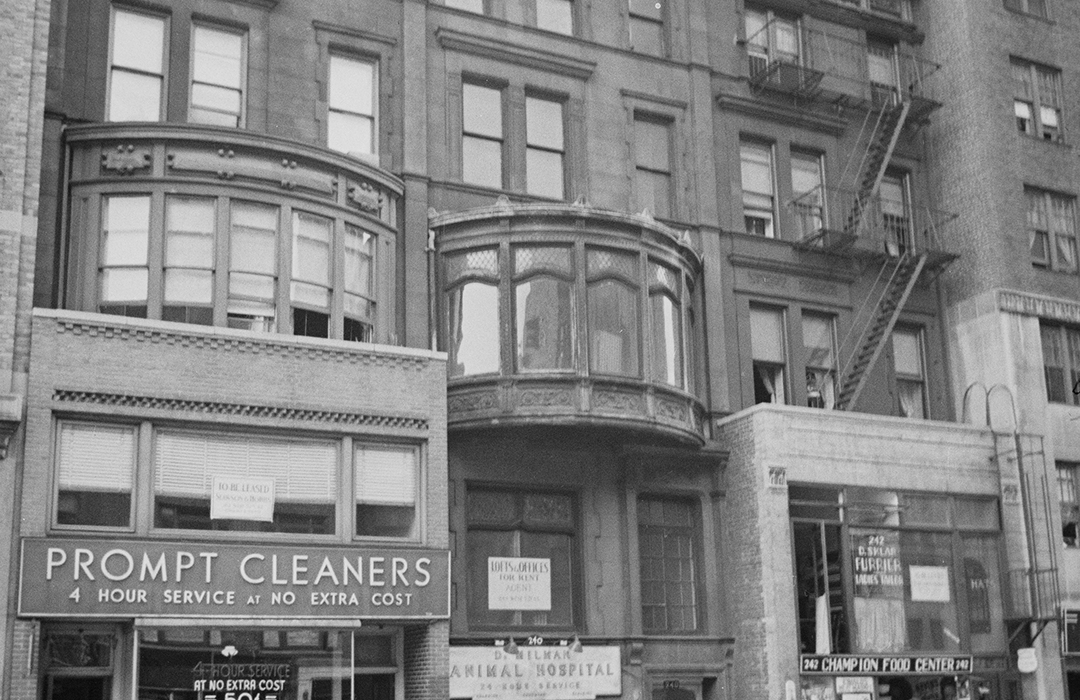 In 1886 developer, William Harloe began construction on a row of five upscale homes on West 72nd Street, between Broadway and West End Avenue.  The architect, John W. Noble had filed plans on January 20.

Among them was 240 West 72nd Street, completed in 1887 and described as a “four story and basement, brown stone front, modern residence.”  It was sold to David Campbell for $36,000—just over $1 million in today’s money.

By the mid-1890’s Dr. Walter Robarts Gillette and his wife, Annie had purchased the house.  The couple had a teenaged daughter, Grace.  Born on January 16, 1860, Gillette was the son of Rev. Dr. Abraham Dunn Gillette.  He was a vice president of the Mutual Life Insurance Company.

Living with the family in the West 72nd Street house was Walter’s widowed mother, Hannah; her brother, John Jay Jenkins; and Walter’s unmarried brother, William Post Gillette.  A broker, William had served under General Henry W. Slocum during the Civil War, and, according to the New York Athletic Club Journal, “was with Sherman on the march to the sea.”

The parlor would see a succession of funerals, beginning in December 1898.  John Jay Jenkins died in the house on December 21, at the age of 77.  William became ill in the summer of 1902 and died on August 24, aged 56.  Only four weeks later, on September 26, 85-year-old Hannah Jenkins Gillette died.  Her funeral, too, was held in the house.

The following year Dr. Gillette leased the house to Dr. George Oscar Pelgram.  He was assistant bacteriologist at Roosevelt Hospital.  But when he married Maude Pauline Cole on October 3, 1905, The New York Times reported, “He will take his bride to Deming, New Mexico, where they will reside.”  Walter Gillette sold the house in 1906 to Jeremiah W. Dimick, a real estate operator.

It was operated as a boarding house until 1913, when Dimick leased it to Mme. Alice Andres Parker’s Music Conservatory—a combination school and boarding house for musicians.  Living on the top floor in 1915 was 25-year-old light opera singer Pearl Palmer.  She was engaged to Herbert Heckler whom she had met three years earlier when they were singing in the same company.

Milton Aborn took over the conservatory for his Aborn Classes for Operatic Training in the summer of 1915.  The arrangement kept Mme. Parker on as director.  On August 28, Musical America said, “Mr. Aborn will shortly take possession of the building…which will be known as Aborn House.

Pearl Palmer was to open in Victor Herbert’s Princess Pat on the night of September 26.  She had just returned to New York from an engagement in Philadelphia.  Upon hearing of her return, Herbert Heckler rushed to 240 West 72nd Street.  Mme. Palmer, who had been sitting with a music teacher, W. W. Houston in the parlor, knew him well.  He had been her student at one point, and she directed him up to Pearl’s room.  Before long, Heckler came downstairs and asked Houston to accompany him to a drugstore.  “Miss Palmer doesn’t feel well,” he said.

On the way back, Heckler confided in Houston that he feared Pearl was losing her affection for him.  “If I can’t have her love, I don’t want to live,” he said, and broke down in sobs.  He composed himself before reentering the conservatory and took the medicine upstairs.  After awhile Houston and Mme. Parker heard raised voices, “but still none went upstairs, for neither Heckler nor Miss Palmer was of the sort who might be expected to give way to a quarrel,” reported The New York Times.  “And then came several screams.” 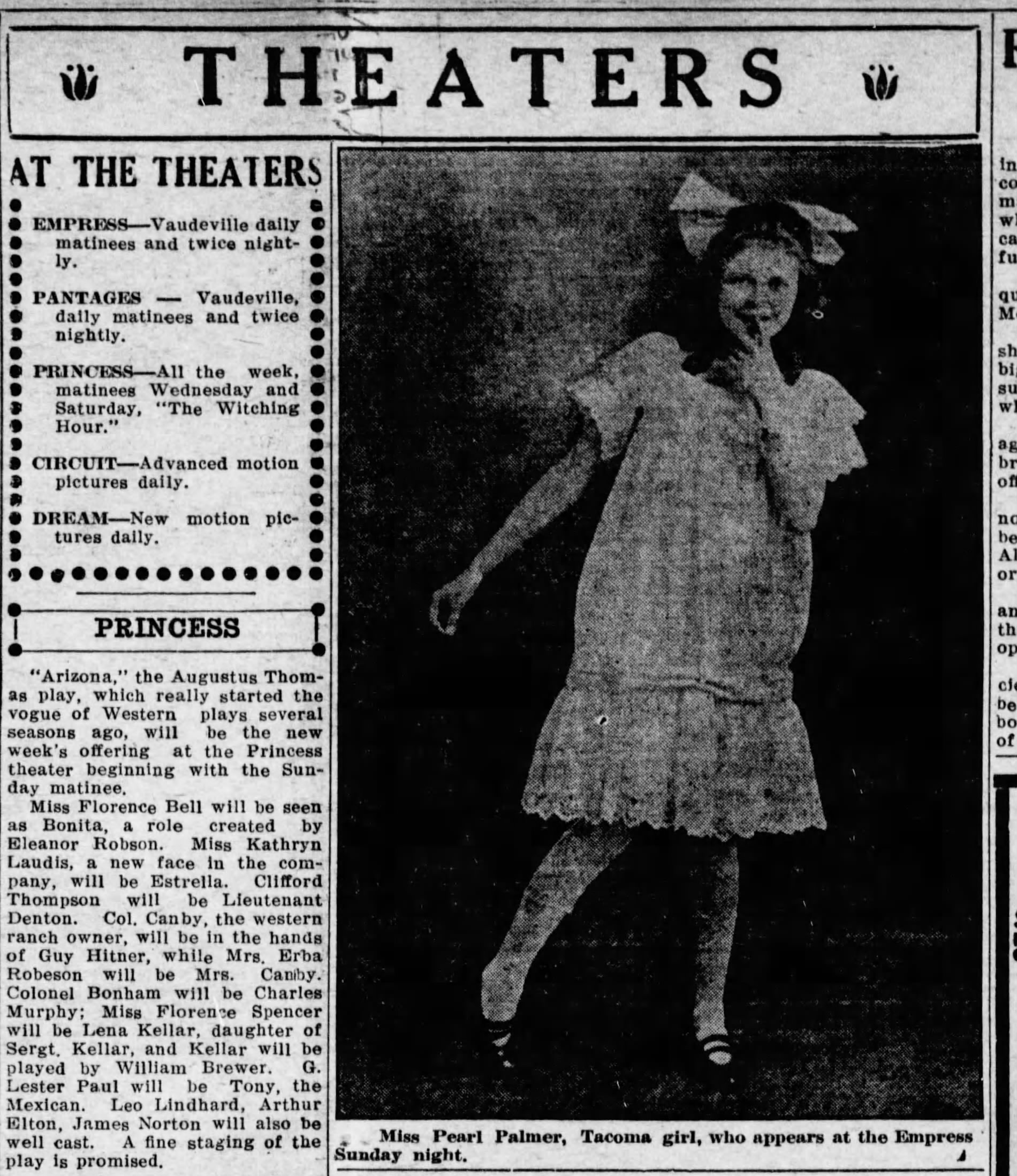 Heckler had fired a bullet into Pearl’s scalp.  As she tried to reach the door, he fired a second time.  This one entered below her left ear and lodged in her brain.  He then turned his revolver on himself, shooting himself in the temple.  His lifeless body fell next to hers.

The Aborn Classes for Operatic Training held courses in Grand Opera, Opera Comique, Chorus, and Orchestra.  Individual instruction was also available in a series of 20 lessons.

Morris Hornfeld was born in Galatz, Rumania in 1885 to innkeepers.  Robbers murdered both his mother and father soon after his birth.  When he was 14, he sailed on the Barbarossa for New York, landing on July 4, 1899.  The orphaned teen did odd jobs, even making money as a fighter.  Each job ended badly.  Now, in October 1915 he was driving a truck when, once again, he lost his job.  Dejected, he walked aimlessly from 8th Street until he found himself in front of 240 West 72nd Street, where the sounds of a girl’s operatic voice wafted out of an upper window.

Twice he passed the house, before he finally climbed the stoop.  On October 11, The New York Times wrote, “The maid who answers the door of the Aborn School for Opera Classes…found standing on the steps a man in uncouth clothes who seemed not able to speak.  Finally, he pointed up to where the voice came from and said: ‘I, too, can sing.  I want to sing for you.’  She shut the door.”

He rang again.  “His face and voice were so earnest that the maid called Mrs. Alice Parker…and, more in the spirit of fun, she took him to her studio, and there the trucker in overalls sang.”  The tenor voice that rang out stopped pedestrians on the sidewalk outside.  When he had finished, thunderous applause from the street entered through the windows.  Mme. Parker insisted that he return the next day to sing for Milton Aborn.

The tenor voice that rang out stopped pedestrians on the sidewalk outside.  When he had finished, thunderous applause from the street entered through the windows.

The bedraggled Rumanian who could not read music, nor had had any instruction, stunned the veteran musician.  Calling him “a discovery,” Aborn told reporters, “I believe his voice will prove to be far superior to [Titta] Ruffo’s.  Indeed, I think with training that Horn will become a great tenor.”  With his new surname (The New York Times said that Aborn “thought he could do without the ‘feld.’”) was given a contract “with a guarantee of all the money he needs and the prospect of earning $1,000 a week instead of the $12 pay of a truck driver.”

The school left in 1917, and Jeremiah W. Dimick’s estate leased the house to Mary A. G. Batchelder.  She unofficially converted it to apartments of one, two and three rooms.  An advertisement that year noted, “maid service and meals served if desired.”  The ground floor was converted to a restaurant, the Mary Augusta Tea Room.

In 1941, the property was acquired by the New York Savings Bank, which hired architect Robert Gottlieb to transform it into a modern apartment building with a two-story commercial space.  A new Moderne style façade of variegated orange brick with black brick highlights extended to the property line.  The black stripes that gave interest to the lower floors, took the place of a cornice, as well.

In 1958, the ground floor was renovated once again for a restaurant, while the second floor continued to be used as a dance studio, as in the original plans.  Each of the upper floors contained two apartments.

The dance studio was replaced by A Show of Hands around 1973.  New York Magazine described it that year as “an arts and crafts collective with about 40 members chosen by a rotating selection committee.”  Handmade crafts were sold here on a not-for-profit basis.  The ground floor was home to the Book Gallery, which featured readings, including some for children.  It was taken over by Radius bookstore in 1976.  Today a nail spa occupies both levels.  The warm brick of the ground floor has been painted a brazen red—an enhancement of which architect Robert Gottlieb would not have approved.