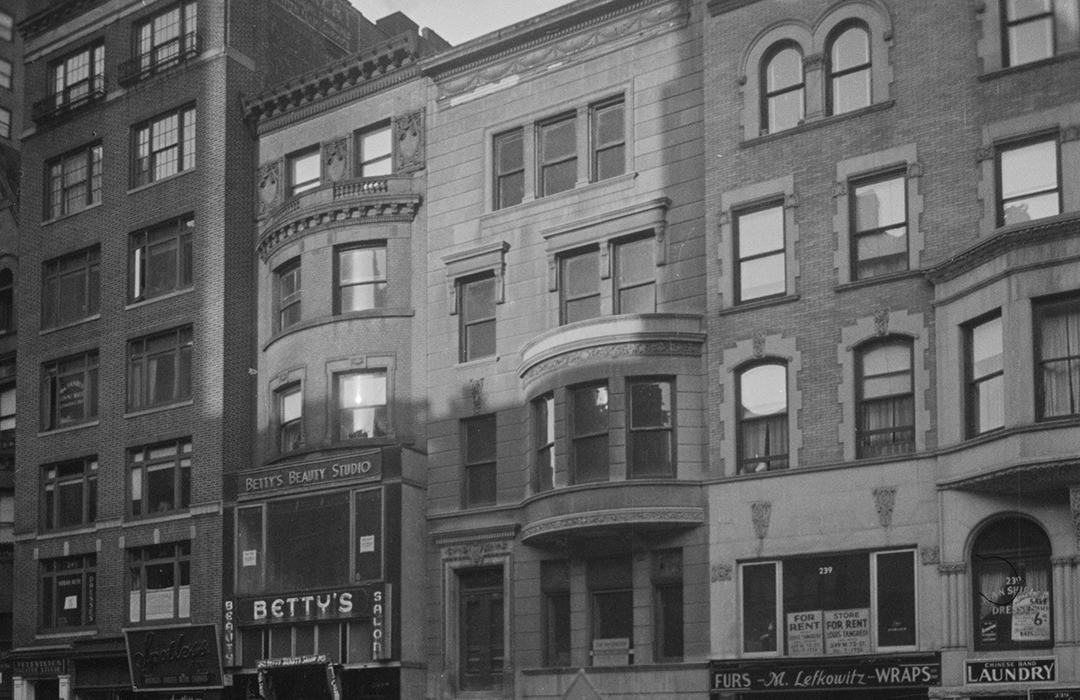 The real estate firm of Wood, Dolson Company signed a long-term lease on the empty plot of land next to the Rutgers Presbyterian Church on Broadway, just south of 73rd Street, in 1922.  The firm erected a marble-faced office building as its headquarters.  But in 1939, as the lease on the property was ending, Wood, Dolson Company decided not to renew, but to purchase its own property.

The 1896 row house at 241 West 72nd Street was purchased and demolished.  Architect William Shary designed a replacement headquarters for the firm on its site, completed the following year.  The rather no-nonsense brick-faced structure, sparsely trimmed in stone, rose three stories and above a commercial base.  The Flemish bond brickwork and the slightly splayed stone keystones were meant to recall early American Federal-style buildings.

The structure was completed late in 1940 and on January 18, 1941 The New York Times reported “A reception to mark the opening of the Wood, Dolson Company’s new building” was being held that afternoon.  Frederick R. Wood had founded the firm just after the turn of the century as F. R. Wood & Co., and around 1912 took William Hamilton Dolson as a partner.  Although Wood withdrew from active participation in the firm sometime during World War I, his name remained when the company was renamed Wood, Dolson & Co. in 1919.

Wood, Dolson Company remained in its headquarters building until 1966 when it was purchased by Austrian-born brothers Jean and Julian Aberbach.  In 1945 Julian had founded Hill and Range Songs, Inc. with two partners.  A publishing company, Hill & Range focused on country music.

Jean joined the firm in 1950 after having worked for Chappell Music.  At that point the Aberbachs shared control of the firm.  While Hill & Range was responsible for much of the country music produced in the 1950’s and ‘60’s, it was one artist in particular—Elvis Presley—who claimed much of the country’s attention.  Hill & Range had control over all the material Presley recorded. 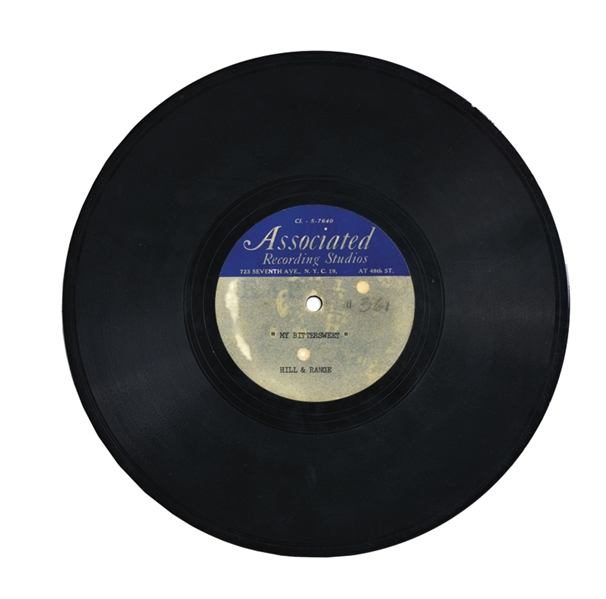 Image via Graceland Auctions.  Have a LISTEN!

In its November 19, 1966 issue, Billboard reported that the Aberbachs “have purchased the building at 241 West 72d Street as a headquarters for Hill & Range and the manifold subsidiaries and affiliated firms.  Alterations will be completed within six months, during which time the entire Hill & Range operation will be transferred to the new building.”

While in the 72nd Street building, Hill & Range became the largest independent music publishing company in the nation.  Among the songwriters it employed were Phil Spector, Lieber and Stoller, and Mort Shuman.  Then, in 1973, Julian Aberbach suffered a debilitating heart attack.  Jean sold much of the business to Chappell Music in 1975.

At the time of Julian Aberbach’s heart attack the Katharine Engel Center for Older People operated at 23 West 73rd Street.  Following the sale of Hill & Range, the facility purchased 241 West 72nd Street and initiated renovations which were completed in 1976.

Among the songwriters it employed were Phil Spector, Lieber and Stoller, and Mort Shuman.

The center became the venue for a multitude of events.  On November 29, 1979, for instance, The New York Times reported that the Municipal Concerts Orchestra would perform that afternoon.  And on March 1, 1985, the newspaper reported on the free weekly dinners for the homeless.  “Tables for four are covered in red-and-white checkered table clothes.  The waiters and waitresses are well dressed and carefully coiffed.  Each Wednesday, they come from the Upper East Side and the Upper West Side to serve dinner to 84 hungry people at the Katharine Engel Center.”

By 1995 the name had become the Council Senior Center, operated by the national Council of Jewish Women.  But little else had changed.  The Wednesday dinners are still served and on Mondays a food pantry provides three days’ worth of groceries to those in need.