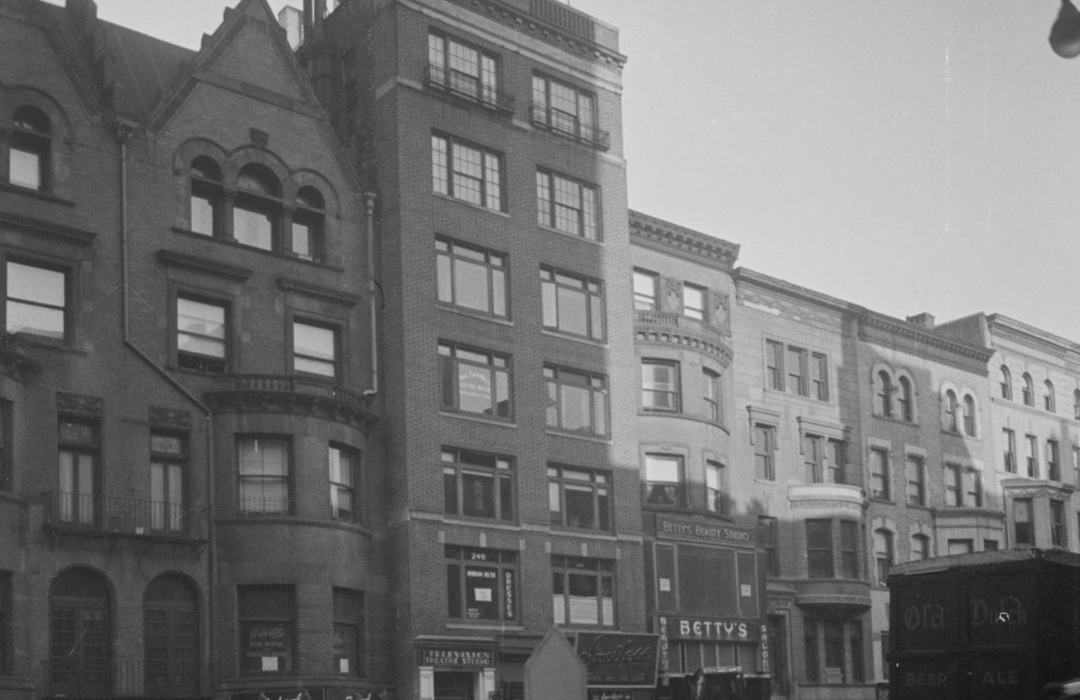 Mentor to the Mob

In May 1924, architect and contractor Abram L. Libman and his newly formed 245 West 72nd St. Corp. purchased the property.  The New York Evening Post reported that the former mansion would be replaced by a “seven-story apartment and medical, dental, and professional building.”  Architect Samuel Cohen’s design was a bare-bones version of Colonial Revival.  The sparse ornamentation relied, for the most part, on stone keystones at the second floor, faux balconies at the top floor, and a paneled parapet above the cornice.

The six upper floors held two- and three- room bachelor apartments.  The Department of Buildings was quick to note that “this building is approved for use as a residence building and that the doctors who are expected to occupy it may carry on their practice in their own apartments.”  None of the apartments had kitchens.  Instead, a large kitchen and communal dining room was situated in the basement.

Despite the Department of Buildings’ caveat, “apartments” were quickly leased as offices (including one to the owner).  On November 5, 1924, The New York Evening Post reported, “The offices of the Amorsafe Mortgage Bond Corporation, the Allman Construction Company, the Warranty Brokerage Company, and A. L. Libman have been moved to 245 West Seventy-second street.”

In a corner of the basement was a steel-doored, fireproof vault.  It may have been included in the plans by one of Libman’s co-investors, Arnold Rothstein.  A racketeer and crime boss, Rothstein was known as “the Brain.”  It was he who recognized that Prohibition was a business opportunity, and he trained future crime bosses Lucky Luciano, Meyer Lansky, Frank Costello and others.  A vault like the one in the cellar of 245 West 72nd Street would have been a convenient spot to store millions of dollars.

It was he who recognized that Prohibition was a business opportunity, and he trained future crime bosses Lucky Luciano, Meyer Lansky, Frank Costello and others.

In 1928 Rothstein lost a large amount in a poker game.  Knowing that the game was fixed, he refused to pay the debt.  In consequence, he was murdered.  And now the Federal agents went looking for “the location of the hoarded wealth and books,” as reported by the Standard Union on January 3, 1929.  Investigators had gotten a tip about the vault under 245 West 72nd Street.  But before that tip came in, four men showed up, flashed credentials to the building’s manager, Frank Garger, and said they were Federal agents looking for dynamite.  He let them into the basement level.

On January 2 the real Federal agents showed up with a safe expert who opened the heavy door.  But they were too late.  “A few empty pasteboard boxes and two immaculate blank books were all the searchers found,” said the Standard Union.

The following year a renovation resulted in a dance school in the cellar and part of the first floor.  Sharing the ground floor were two stores.   Below ground Oscar Duryea and his wife ran the dance studio.  Included was a large dance floor where the public could enjoy three hours of “social dancing” to an orchestra.   In 1932 it became the Sonia Serova School of Dancing, which offered “classes for children and adults in all types of dancing.”  The studio also provided a “class for business girls.”

One of the stores was home to the Dollar Clearers by 1934.  It was one of a 32 New York shops of the Spotless Dollar Cleaners, Inc. chain.  The other was ground floor space was occupied by Moore’s Restaurant.  The dance school left that year, to be replaced by the Institute of Applied Trust.  On October 19, 1935, The New York Sun reported, “Dr. Bhagat Singh Thind is beginning a new series of lectures” every day except Saturday.

In the meantime, one of Arnold Rothstein’s former disciples, Charles Luciano, known as Lucky Luciano, was still involved in the building.  The head of the Genovese crime family, he was put on trial in May 1936 for a series of charges.  Among the witnesses called was Muriel Ryan, the girlfriend of Peter Balitzer, alias Jack Ellis.  The district attorney asked her, “Wasn’t this boyfriend of yours running a disorderly house [i.e., a house of prostitution] at 245 West 72nd Street?”  Muriel answered, “Yes.”  Another Luciano cohort, Jerry “the Lug” Bruno “ran a gambling club over Moore’s Restaurant at 245 West 72nd Street,” according to William Donati’s 2010 book, Luciano – The Rise and Fall of a Mob Boss. 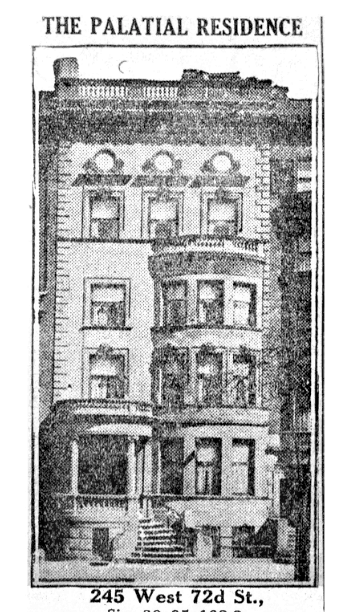 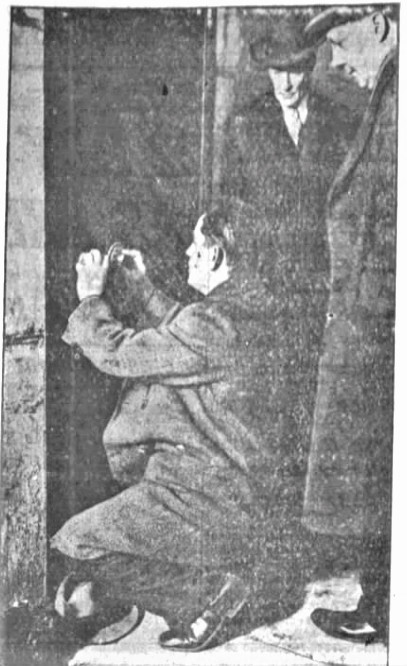 By 1938 the Institute of Applied Trust had been replaced by the Spiritualist Church of Universal Brotherhood, run by Robert Lee Hector, a spiritualistic medium.  The pastor was taken away in handcuffs on March 8, 1937.  He and a theatrical agent, Edgar Allen, had promised a discharged policeman that they could get him reinstated for $300.  The men purported to “have influence” with the newly elected Mayor La Guardia.  Ex-cop Norman Ramsdell, who was given marked bills by authorities, kept an appointment in the “church” that day, and handed over the cash.  “Just then Detective Beiner stepped up and arrested Allen and Hector,” reported The Sun.

With the large auditorium vacant now, it became the Television Theatre.  On September 11, 1939, The Brooklyn Citizen announced, “Miss Arlyne Chanler, personality song stylist, is a new find for television discovered at the Television Theatre, being conducted by Miss Carmen at No. 245 West Seventy-second street, Manhattan.”

The building’s parapet was removed during a renovation completed in 1941.  There were now four apartments per floor above the second, and, once again, a school of dancing and music in the basement and ground floor.  The two shops on the first floor remained, as well.

In the early 1970’s one of the shops was home to Forward Look, a women’s apparel and accessories store.  By 1976 Noto occupied a store.  The gift store offered often unusual items, like the Chinese opera masks and “fantasy goblins,” according to The New York Times columnist Enid Nemy on May 3, 1978.  “There’s a pig eating a watermelon (something you’ve always wanted), and an old man with a long beard, and on and on.”

The 1980’s saw Westwinds Learning Center in one of the spaces.  The facility offered courses in cooking and wine tasting.  The Discovery Center was here by 1987.  It held classes in everything from computer training, to “law for non-lawyers,” to training for would-be travel agents.

Neighbors knew that she worked from her apartment, but according to one, “never gave much thought to the subject.”

Wallis Mayers Needlework shop for “needle-pointers and knitters” opened on September 7, 1990.  The former dance school was, by then, the photography studio of Fred Marcus, here at least through 1997.

Living in a top floor apartment at the time was 50-year-old Nadia Frey.  Neighbors knew that she worked from her apartment, but according to one, “never gave much thought to the subject.”  They knew her mostly as the woman dressed in a t-shirt and jeans who walked her black chow chow dog to Riverside Park.

In July 1997 her daughter had tried unsuccessfully to get in touch with her, and asked the police to do a wellness check.  When they entered the apartment on July 26, they found Frey’s lifeless body on the living room floor, stabbed repeatedly.  The New York Times reported, “They also discovered that she was no ordinary professional.”

The newspaper said, “A police search turned up whips, chains and leather costumes,” in the apartment.  A further investigation revealed she had been arrested for prostitution three times in Virginia and Washington D.C. and that she advertised under the name Mistress Hilda.  West 72nd Street neighbors were not shocked.  The owner of West End Florists, directly across the street, said “We’ve grown callous to this sort of thing.  I listen to Howard Stern, so I know that anything goes.”  And Ronald Katz, co-manager at Fischer Bros. & Leslie, waxed philosophical.  “Would you rather have a dominatrix next door or a Nazi youth?”

Although sadly shorn of its decorative parapet, the innocuous structure sits quietly along the West 72nd Street block, successfully keeping its often-jarring history a secret from passersby.