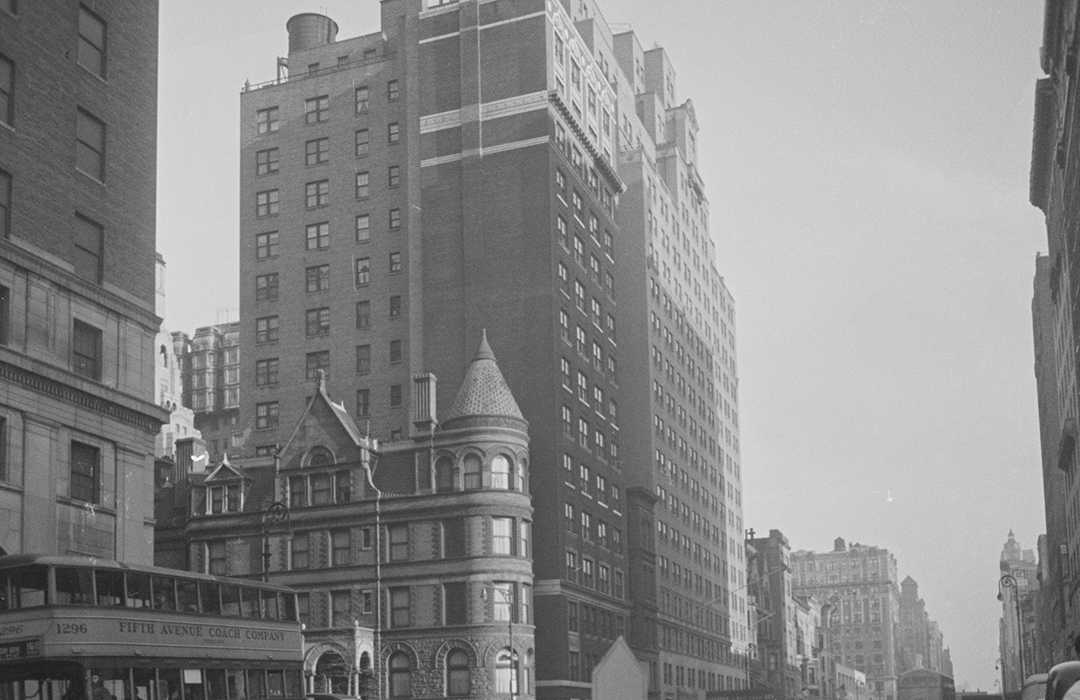 By 1924 West 72nd Street was no longer the elegant residential street it was in the 1880’s and ‘90’s.  Stores, offices, and apartment buildings now replaced the private homes of a generation earlier.  In 1924 the Jatison Construction Company, headed by Alex Tishman, demolished two of the last high-stooped houses—267 and 269 West 72nd Street—and laid plans for a modern apartment building on the site.

The architectural firm of Schwartz & Gross designed a 15-story and penthouse Colonial Revival structure faced in brown brick and trimmed in white terra cotta.  Its entrance sat within a neo-Federal portico capped with a wrought iron, pseudo balcony.  Neo-classical panels of urns and garlands carried on the 18th century motif.  There were 57 apartments throughout the building.

Among the initial residents was stockbroker Samuel Taishoff.  In October 1925 he was put on trial, charged under what the Daily News called “the Martin anti-stock fraud law.”  He sold bogus stocks to unsuspecting female clients.  According to the Daily News, they were led to believe “they could recover money on their worthless stocks by exchanging them for Florida real estate.  The victims were allowed to do this provided they purchased additional real estate, which called for a larger payment in cash.”

Among the witnesses was Frances Howell, an unmarried nurse.  She testified that she “was swindled out of $2,000, an amount she had saved so as to take care of a sick relative in England.”  It took the jury just five minutes to come to a guilty verdict.  In passing sentence, Judge Lewis L. Smith branded Taishoff “the most contemptible and meanest kind of criminal, preying on gullible women.”  Taishoff was sentenced to four to eight years hard labor in Sing Sing prison.

The residents of the building were affluent enough to afford automobiles.  Walter Gladstone, a 26-year-old manufacturer, got into trouble with his car on February 13, 1925, when he was charged with not only driving recklessly at Seventh Avenue and 51st Street, but with running over Patrolman Patrick Landrey.

At some point in the 1930’s a store was quietly inserted to the left of the entrance.  One of the windows was converted to a doorway, and the other was slightly enlarged as a show window.

While most of the residents seem to have been upstanding, respectable citizens, that was not always the case.  In 1936 Joe Bendix lived here.  An artist, he maintained a small studio elsewhere where he retouched photographs, and in 1935 had painted the murals in the Stadium Café on Broadway.  But it was his avocation that got him into trouble.  Since 1912, he had pleaded guilty 16 times to grand larceny and burglary.

In May 1936, he was convicted again, this time earning a sentence of 15-years-to-life.  While on the stand, he revealed his connections with the notorious gangster Charles “Lucky” Luciano.  He said he met Luciano in 1927 and “I had some business relations with him.”  The nature of the “business relations” was Bendix’s position as a “collector” for the Luciano mob—one of the thugs who intimidated those behind in payments to the gang, often using brute force or worse.

Joe Bendix was an exception.  As the decades passed the names of the residents appeared in newspapers for much more upstanding reasons.  Such was the case on September 9, 1942, when The Brooklyn Citizen reported that Arnon R. Rojansky was about to receive his Ph.D. in Juridical Science from the Brooklyn Law School of St. Lawrence University.

He said he met Luciano in 1927 and “I had some business relations with him.”

Among the residents living here in the 1960’s were Victor Schwarz Chavard and his wife, Hildegard.  Born in Vienna, Austria in 1889, he had come to the United States in 1939.  He was a structural designer with J. G. White Engineering Corporation before joining Spencer, White & Prentis, Inc., engineers and contractors.

Living here in the last quarter of the 20th century was actor Frederic Tozere.  His wife, actress Mary Brady, had died in 1968.  Tozere first appeared on Broadway in 1924 in Stepping Stones.  He appeared in supporting roles in many Hollywood motion pictures, including Madame Bovary and The Iron Curtain, and in television dramas like The Would-Be Gentleman and Edward, My Son.

The handsome building is little changed from when it first opened in the 1920’s.  On either side of it, remnants of patrician 19th century homes remind us of what the block was like before the advent of invaders like this one.