72nd Street is His Middle Name 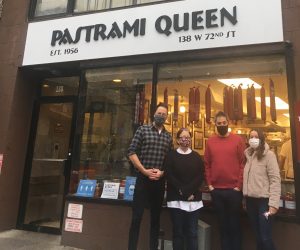 When Jonah [72nd Street] Phillips, owner with his father Alan of Pastrami Queen at 138 W. 72nd, starts talking about traditional Jewish Kosher Deli foods, he turns theatrical, using the inflection of immigrants who spoke Yiddish and settled in the early 20th Century in Brooklyn and on the Lower East Side. Jonah looks up (to heaven) from where he and his girlfriend Alex Leshkevich are holding hands across the table to thank his grandma Lil, who lived on 69th Avenue in Sheepshead Bay, for her cooking that has inspired some menu items. The 72nd Street restaurant opened in December 2020. The father & son also own a Pastrami Queen that opened a few years ago on the Upper East Side.

Not only is Jonah totally New York, West 72nd Street is pretty much his middle name. He grew up on 72nd Street, went to the Heschel School when it was on 89th Street (it’s now on West 62nd Street) and then completed high school at Calhoun on 81st and West End Avenue. Now, he and Alex live on 72nd Street just down from the new restaurant.

Of course pastrami sandwiches are served at Pastrami Queen. They come on seeded or unseeded rye, with two kinds of pickles and a side. “But it’s not all pastrami,” says Jonah. “We’ve got kleplash, stuffed cabbage and blintzes.” Hugely plump knishes like you wouldn’t believe, filled with a variety of ingredients, cram the shelves lining the right side of the deli. Mouthwatering to anyone who walks by.

New variations of familiar dishes like a savory meatloaf and an irresistible, not too sweet Kugel are introduced by Chef Linda Japngie. “A bowl of chicken Matzo Ball Soup in times of uncertainty brings comfort to one’s soul,” Jonah says, summing up the essential message for these times.

Klezmer music plays in the background. Every element here reminds you that this food has a tradition. And, as every New Yorker knows, you may be able to have a knish in Vermont, a pastrami sandwich in Kentucky, or a sour pickle in Arizona, but that item will never have the New York essence – a combo of cultural identity and just the right flavor.

On the left wall hang oh-so-New York vintage photos of the city’s classic Jewish delis: Katz’s and the Carnegie among many others. Also, there’s a photo of Fine & Shapiro, the neighborhood’s mainstay for almost a century and Pastrami Queen’s immediate predecessor.

Jonah say’s the Upper West Side Community has been incredibly supportive of both Pastrami Queen and Friedman’s at 130 West 72nd Street, also owned by he and his father.

How did they get into the business? Jonah launches into what in this setting feels like a timeless tale of friendship and entrepreneurial savvy. The original Pastrami Queen was opened by Barry Friedman in Williamsburg in the 1950’s. Barry then moved his business to Queens. Later, he closed that place, opening a Pastrami Queen on the Upper East Side. When his lease was coming up he questioned his friend Alan, Jonah’s Dad, about where to move next. “Alan’s a real estate guy,” says Jonah, “He told Barry he knew of a place on Lex. But, if he was going to open it as the new Pastrami Queen, he wanted “a piece.”

So, that was that. The partnership went well until Barry’s death from cancer several years ago. From that point, father and son have been making a go of a business that specializes in a quintessential New York comfort food that never grows old.