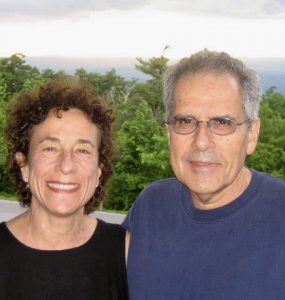 By the time Nina and Dan met in 2006, they both had explored activism in different ways. They met while each was working on a series of anti-war hearings.  Dan was a reporter, writer and teacher. He had worked tirelessly on the battle for the Beacon, a huge challenge which drew on his skills as a community organizer, writer and reporter who knew how to get things out through the media.

The campaign to save the theater, a one-time movie palace, from becoming a disco, had engaged many people including Marvin Hamlisch, Yoko Ono, Judy Collins and Harry Belafonte. Cartoonist Jules Feiffer donated a limited edition print to raise money, and philanthropist Brooke Astor provided funding.  Eventually, a ruling by Acting Justice Jacqueline W. Silbermann of the State Supreme Court in Manhattan, was definitive—the conversion would violate the theater’s protected status.

Dan died at age 74 in 2014.  In his obituary, The New York Times printed excerpts from a 2008 letter he had written to the paper expressing his joy regarding the Beacon’s future. At this point the theater was being extensively renovated.

“Ultimately, we prevailed over a consortium of cynical developers who would have replaced this magnificent movie palace with an enormous discothèque-restaurant and ultimately a black hole destined to house yet another big-box store,” He continued, “This was one of the grandest and, alas, last demonstrations of community heart and power in New York City. It has taken far too long for this cleanup and renovation to occur, and we are thankful for it, finally. We look forward to the restoration of this unique showplace to its original splendor.”

Nina grew up on the Upper West Side and has been living on West 96th Street for many years.  She was part of a successful community/Landmark West! effort to halt the construction of 37 condos inside the landmarked First Church of Christ Scientist at 96th Street and Central Park West.  At the present time she is concerned that the luxury apartment tower—one apartment per floor— currently under construction and adjoining her building, will lead to further upscale development in a neighborhood that has always been characterized by its ethnic and income diversity. The new development replaces a row of three brownstones.

“I was a Red Diaper Baby. Activism was part of my upbringing,” she says.  A graduate of the High School of Music and Art, she became interested in contemporary art while an art history graduate student at Oberlin.  Later, living in Washington DC, she got her first real job.  It was as assistant curator at the Corcoran Gallery of Art.  Inspired by a mentor there, she became increasingly involved as a curator and writer in politically and socially-engaged art and activist art.  She conceived and edited But is it Art?  The Spirit of Art as Activism.  And, even looking at the titles of a few among many exhibits she has curated indicates the focus of her interests:

Why was Dan so intensely interested in the Beacon cause?  It’s possible that his father’s death of a heart attack at 39, when Dan was 9 was deeply traumatic.  His father had purchased and fixed up a small movie theater on Long Island.  Dan and his brother would help out on weekends.  The business went under.  It’s not a far stretch to consider that in saving the Beacon, Dan was paying respect to his father’s one-time dream to run a movie house.

What did Nina and Dan have in common? They cared about the neighborhood and their community.  And, in fact, Nina acknowledges that her own interest in preservation, which began in 2015, was no doubt inspired by Dan’s.

When not engaged in their respective professional work, Dan and Nina loved to go to movies together, eat out—and in, talk about what they were reading, what was going on in the world, hang out in Riverside Park doing the Times crossword puzzle together, walk observingly around the neighborhood, and delight in each other’s company. Neither took themselves too seriously.  According to Nina, Dan had the best sense of humor of anyone she’d ever encountered.

After Dan died of complications from prostate cancer, Nina and friends and supporters of Dan who had worked with him on the successful fight to save the Beacon were determined to have a plaque acknowledging his role in preserving the theater.

Nina describes appealing to MSG, (Madison Square Garden), owners of the theater, to install a plaque honoring Dan’s role in saving the theater.  After some resistance, the request was approved and it was placed on the wall in the back of the lobby.  The plaque reads: In Memory of Daniel Meltzer (1940-2014) Friend, Neighbor and Community Activist.