BUDS for a better daily life 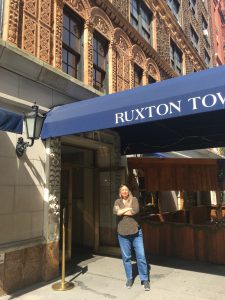 Rani Dorman, Director and Design Specialist of her firm Blooming Urban Design Scapes (BUDS,) spends most days planting and designing backyards, rooftop decks, balconies, and flowerboxes.  Working with a small crew, she is making daily life better and more beautiful from dawn to dusk.  Her summer work schedule includes a wide swath of apartment buildings and private homes in Manhattan, as well as some extensive work across the Hudson in locations like Hoboken, Edgewater, and Weehawken.

With such a wide portfolio, is there a signature BUDS style? “I always aim to achieve the style and balance the client wants” she says, but notes that her personal preference leans toward the more natural, unpolished aesthetic. Some clients approach her with very specific requests—think of a rooftop garden in downtown Manhattan that looks like a hilltop leading to a platform with panoramic views of the skyline, while others throw their trust behind the process with little preference beyond “please fix my garden!”

The plea to “fix my garden” isn’t such an unusual one. While some of BUDS‘ projects are designed and planted from scratch, many others involve a preliminary work period intended to salvage and repair the mistakes of previous landscape projects. One notable example is a rooftop where a previous contractor had planted birch trees in very shallow soil, which caused the 60-foot trees to sway toward the ground with every rainstorm.

Not all of Rani’s jobs are massive undertakings involving rooftops and backyards. She pays equal attention to smaller contracts, like the window boxes at long-time client Hotel des Artistes, and the individual terraces at Clifton House on West 79th Street (another long-time client) that have flourished with apple trees, blueberry bushes, and more under Rani’s care.

Along with designing planted environments comes maintenance. Rani is self-taught and has embraced the challenge of learning from extensive research and her own experimentation. With more than a decade of gardening under her belt, Rani has become immensely knowledgeable about choosing the right spot for a particular plant to thrive, as well as the mechanics of drip systems, irrigation and soil composition.

Though she seems perfectly matched to her job, Rani had never thought of becoming a garden designer. As a young woman studying to be a social worker, her goal was to make a real impact in terms of improving the daily lives of her clients. Once she completed her education and was out in the field, she was disappointed—frustrated that any positive impact seemed to be short circuited by bureaucratic inefficiencies and lack of program funding. She transitioned to a stay-at-home mom in the early 1990s, and it was actually through her daughters’ elementary school (PS 199) that she became involved as a volunteer leader creating a garden for the schoolchildren.

The garden thrived and eventually was overseen by others once Rani‘s daughters had moved on to higher grades, but that wasn’t the end of it. Having seen her success with plants and design in the PS 199 garden, friends and acquaintances started calling. “Sylvie’s on the floor,” one caller said.  No, Sylvie was not a person but a plant who was sitting in too much water. It wasn’t long before Rani moved from emergency plant rescue and advice to developing her own business.

Rani and her family have lived for many years in their apartment on 72nd street. No, they do not have an outdoor space, but that’s just more of a reason to get excited about all the jobs lined up for BUDS!