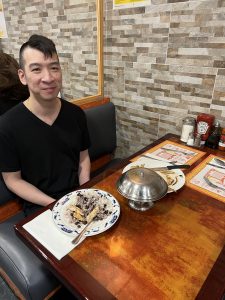 “Ninety percent of our customers are regulars,” says Richie Lam, Manager of La Dinastia, a Chinese-Latin restaurant at 145 West 72nd Street that his father, Juan Lam opened in 1986.  Earlier it had been Principe restaurant.  Now, it is one of the last Chinese Cuban restaurants left on the Upper West Side where once there were many.

The interior of La Dinastia has been redone over the years but subtle changes have deliberately ensured that the eatery recalls the comfortably vintage 70s and 80s. The domed aluminum serving dishes once the hallmark of Chinese restaurants?  “We still use them,” says Richie. “We are proud of our heritage.” You’ll also find paper placemats with astrological signs and their meanings.

While taking a moment to have a late lunch of beans and rice and chicken steak with onions, Richie was greeted by nearly every customer who entered on a Tuesday at about 3:30pm, apparently a popular time for locals to come in to order any one of the restaurant’s savory specialties.

Richie says boneless crackling chicken is a long-time favorite. On the Cuban side, many customers order it shredded. Certain old school Latin dishes like Cuban pot roast and codfish in a special sauce have lost their fans over the years.  But grilled salmon and brown rice have been added to the menus “everyone likes salmon,” he says.

Richie grew up in the restaurant helping his father with managerial tasks after school and while completing Brooklyn College. An accounting major, he found it impossible to get a job on graduation and was happy to have the family business as a backup plan. That was in 2008. Today, with his Dad in semi-retirement, Richie has his hands full filling in whenever needed. As with many other businesses, they are short-staffed. On the bright side, there are a number of loyal workers who have been cooking and serving at La Dinastia since the early 1990s.

Originally from Guangzhou, China, having worked long hours for many years to grow and maintain the restaurant, one of Juan’s great joys is to have more time and energy for bowling, says Richie, who also loves bowling. “It was our thing,” says Richie, Saturdays, Mom, Dad, his older sister and he would all go bowling near their home in Elmhurst, Queens. “America’s favorite pastime,” he says.