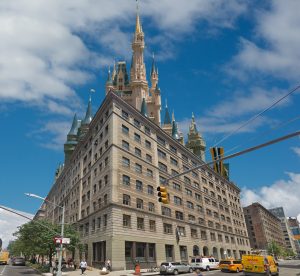 CRAINS has announced that Disney has tapped Skidmore Owings and Merrill to design their new two-towered complex at 4 Hudson Square.  The 1.3 million square feet will serve to house functions displaced from the Upper West Side with the sale of their Kohn Pederson Fox designed campus to developer Larry Silverstein.  The mouse has money to build!  Their Upper West Side campus sold for a reported $1.15 Billion and they picked up the downtown block from Trinity properties for $650 Million.  According to The Real Deal, the first floor will be retail, and Disney offices will begin at the third floor.  Preliminary designs of towers are 19 stories as filed with the Department of Buildings.