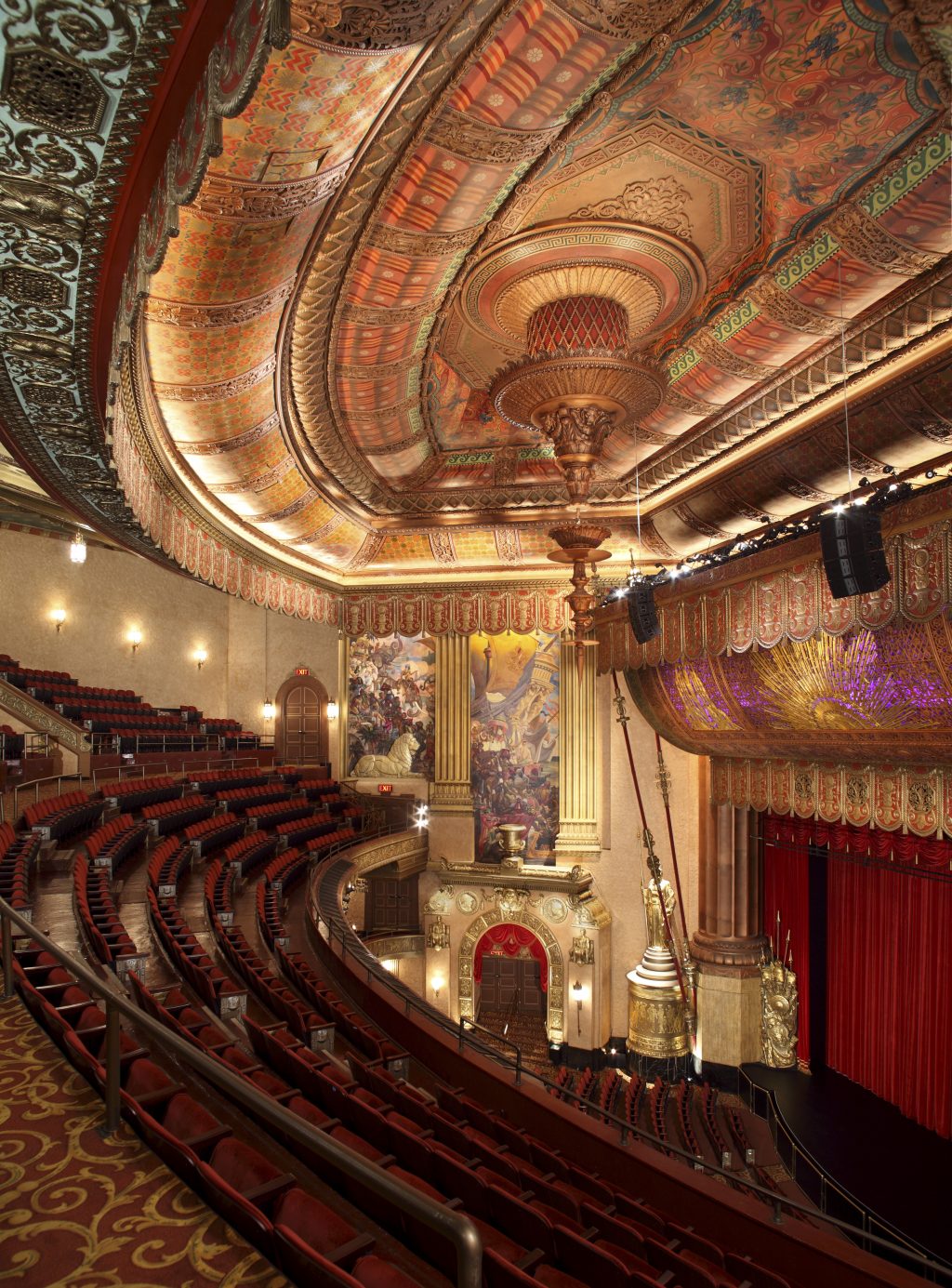 It might seem that the transformation of the Beacon Theatre, a 1929 movie palace at 2124 Broadway into a 21st Century music venue was no big deal as both involved the presentation of entertainment.  But, actually, there were monumental challenges such as anticipating the need to accommodate ever more sophisticated sound systems and lighting used in the production of contemporary music events.  There’s also acknowledging the differences in optimizing the audience experience for a generally quiet movie theater audience in contrast to the boisterous and interactive environment that characterizes today’s rock concerts.

Apart from technologies, considerations about audience flow and plumbing, the biggest challenge of all presented to the architects who undertook the job was restoring the vast, complex deteriorated interior to its fabulous original splendor.  According to Christopher T. Cowan, Principal at the architecture firm Beyer Blinder Belle, one of two leads on the $15 Million six-month job designed and completed in 2009 for Madison Square Garden (MSG), a division of Cable Systems Corporation this big, grand beautiful and true to the original concept was only possibly thanks to MSG who was willing to fund the restoration. MSG has a 20-year lease (beginning in 2006) on the theater.

“It was an honor to work on this iconic theater and all involved in the project were proud to have participated in its restoration” Cowan said, recently. The BBB website notes that numerous artisans and construction workers were involved with the project.  Cowan added that he recalls having been in the neglected theater years before it was renovated, during its short-lived use as a special event venue.  Cowan credits the persistence of Upper West Side advocacy groups for resisting past proposals that would have drastically altered the theater before it could be restored.

Looking back, Cowan recalls issues with disrepair in almost every aspect of the theater. This included original lighting whose bulbs had gone out and not been replaced in years.  Great attention was taken in removing layers of paint to be able to analyze and reproduce not only the original colors, but the hue and toned of faux gold and silver leaf with a certain patina, murals and carpeting were reproduced, new flooring laid and almost 3,000 seats were installed.  Plumbing installation and reconfiguration of safety access and egress had to be ensured.

Finally, when all was done, Cowan and others who worked on the theater attended the opening night concert featuring Paul Simon and Art Garfunkel. “Yes, it was a wonderful event,” says Cowan.

The Beacon‘s first life began with a talking picture, Tiger Rose starring Lupe Vélez and although the Beacon was originally designed for silent films, by the time the theater opened, silent films had already become obsolete.  Years later, a New York Times article notes that the Beacon can be seen in Shine the Light, a Scorsese documentary celebration of “the Rolling Stones’ 2006 performances at the Beacon.”

Bits of ephemera attached to the theater include reports of an elaborate organ that is still likely to be beneath the stage.  In early movie palaces, an already seated organist might emerge to play on a platform that was raised from below to stage level.  And, according to histories of the hotel building in which the theater resides, part of the initial promotional concept for the extravagant structure was that a beacon of the type to guide air traffic was installed at the top of the building.  Its use was curtailed because it was not an officially approved location.

The Allman Brothers started performing at the Beacon even before the major renovations were complete and infused robust new life into the Theater that still showcases scores of R&B, pop, jam bands and rock concerts.  The Beacon has also been the venue for celebrity birthday parties and even the Tony awards.

The Allman Brothers Band may top the list for the number of performances at the Beacon (200+ Between 1989-2014) given by a specific band.  The Atlanta Journal Constitution commented, “Beginning in 1989, the Allmans began playing multiple shows at Manhattan’s Beacon Theatre almost every March, creating a spring destination for faithful fans of “The Brothers.”  Like a music festival featuring only one band, the yearly residencies at the 2,800-seat Beacon served as a reason to clear the calendar, arrange hotel rooms and gather with friends.”

The current Beacon season offers a variety of shows.  Among them, songwriter and performer, the icon Bob Dylan who has played the Beacon in the past, will be bringing his tour “Rough and Rowdy Ways” to the Beacon in November 2021.