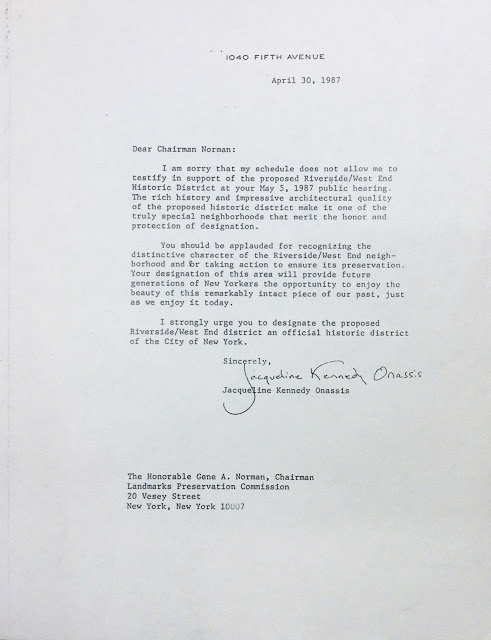 In 1985, when LANDMARK WEST! was founded to advocate for more widespread protection of our neighborhood’s architectural heritage, the Upper West Side only had 337 designated landmarks.

With the recent Riverside-West End HD Extension I designation, approximately 194 new landmarks have been added to the West Side’s noble roster.Take a moment to join us in relishing the pure pleasure of a job well done. Our smiles get even wider when we look back at this prescient letter from Jacqueline Kennedy Onassis to the LPC, dated April 30, 1987.

She wrote: “Your designation of [the Riverside-West End HD] will provide future generations of New Yorkers the opportunity to enjoy the beauty of this remarkably intact piece of our past, just as we enjoy it today.”

The district was officially designated two years later, on December 19th, 1989. Don’t take your neighborhood for granted–extensions II & III have been heard but NOT designated. Email LPC Chair Tierney at comments@lpc.nyc.gov and tell him, “I support the designation of the Riverside-West End Extensions II & III.” Sign your name–email it soon–today, if possible. Send a copy to landmarkwest@landmarkwest.org.