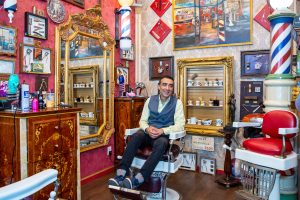 Arthur Rubinoff in his Museum

Awesome doesn’t begin to describe the remarkable NYC Barber Shop Museum at 290 Columbus Avenue.  Entering by way of a pair of red velvet roped brass stanchions, you feel you are about to encounter a special experience.  Your expectations are rewarded as you are drawn in to share the enthusiasm of barber and museum founder Arthur Rubinoff for his extraordinary showcase of all that relates to barbering.
Arthur came with his parents to the US in 1989.  He opened the museum at 290 Columbus Avenue on June 15, 2018, to honor his father Rubin who died in 2004 and other barbers everywhere.  But, understanding the provenance of this museum, means going back at least a century to its beginnings in Fergana, a small city 3-4 hours from Tashkent, Uzbekistan.
There, in the former Soviet Union, Arthur’s great grandfather opened a barbershop.  As Arthur describes the location, “This was near the flea market. As you find all over the world, the barbering craft originated on busy streets and market places where people gathered.”  His son, Arthur’s grandfather, opened his own store in 1947, the same year that Rubin, the youngest of his five children was born.  After coming to the United States with his wife and Arthur, their only child, they settled in Astoria, owning one store after the other.  At one point they had opened 37. Rubin’s dream, one that came true, was to open many shops and sell them to the workers.
Today, Arthur lives with his family in Forest Hills.  He owns and manages four barbershops, all called Reamir, plus the NYC Barbershop Museum.  The oldest of his two sons works at the East 57th Street shop.  The shop across the street and half a block north of the museum at 303 Columbus Avenue, is one that Arthur has owned for 22 years and is still going strong.  He considers this UWS location, “Where I grew up professionally.”
Arthur’s collection is continually expanding with many items amassed on his travels in the tri-state area, the South and on trips abroad.  He keeps much of his large collection (including more than 30 barbershop chairs) in a warehouse.  This makes it possible for him to change the window displays and interior displays every 6-9 months. The exhibits include razors, brushes, and framed magazine advertisements.  He says that customers notice the changes in the seating and exhibits and enjoy the differences in the setting. Currently, sparkling crystal chandeliers light the museum‘s main red-walled room.  Huge mirrors with gilded, carved frames hang facing vintage barbershop chairs refurbished to mint condition, and intriguing collectables from scissors to vintage hair dryers are placed on elaborate marquetry cabinets.
Not only is Arthur giving expert haircuts, trimming beards and eyebrows and attending to other grooming details, but he also regularly holds seminars for barbering students aged 19-23 who settle into the museum for hour-long instruction sessions focusing on approaches to barbering and cleanliness and safety.  “I’m a health freak,” Arthur says, and he enjoys sharing his knowledge and insight into the trade with newcomers entering the field.