On the move? History may repeat itself at the American Museum of Natural History

LANDMARK WEST! reviews and comments on every Certificate of Appropriateness (C of A) item from the Upper West Side that goes before the Landmarks Preservation Commission (LPC).  When items come up for the Board of Standards and Appeals from our district and on city-wide issues, we comment on those too.  More rare are items before the Public Design Commission (PDC) which meets atop City Hall.  Formerly the  Municipal Art Commission, the PDC reviews applications for permanent works of architecture, landscape architecture, and art proposed on or over City-owned property.
This coming Monday, July 9th, the PDC will hear the “Relocation of the New York Times Capsule (2000) by Santiago Calatrava, from the entry plaza outside the Columbus Avenue pavilion to the entry plaza outside the Rose Center for Earth & Space, American Museum of Natural History” reference full  AGENDA HERE.
The capsule, designed by Santiago Calatrava (famous for many bridges, as well as buildings including the World Trade Center Transit Hub), with the Polshek Partnership, and commissioned by the New York Times, is welded shut and contains more than 100 artifacts within an 8-unit 50 square foot capsule that will be revealed on January 1, 3000.  Officially placed on April 26, 2001, by the time of this hearing, it will have lasted just about 1.7% (yes, there is a decimal point!) of its intended 364,636-day lifespan before being moved. Perhaps at the time of its placement, there was an expectation that parks are for open space?  Read the details on this monument directly from the Parks Department HERE.
Since this item is not interred, (only footings lie beneath the surface) and it is remaining public and on the campus, LW! is not opposing the relocation, and in fact, feels that relocation prior to construction efforts will not only protect it, but keep the capsule within public view more consistently.  That said, we stand by our initial, and oft repeated testimony with regards to the American Museum of Natural History that there needs to be a new master plan.  If one were created, the time and expense of relocation, and impact upon the park could have been avoided. 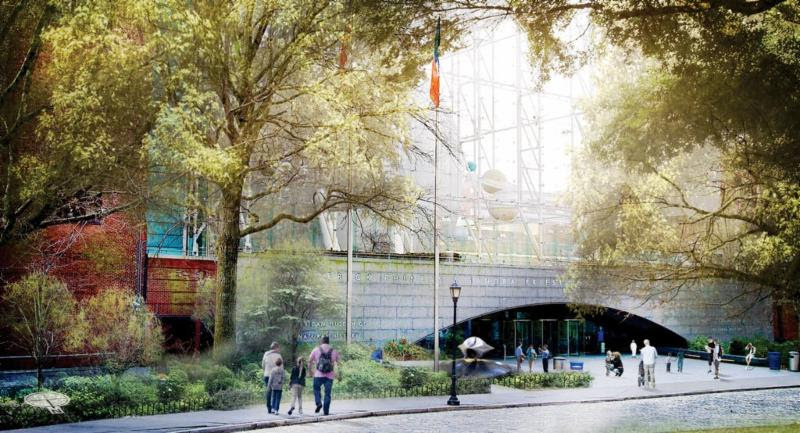 Rendering of Times Capsule relocated to the Rose Planetarium.

Monday, JULY 9th! at The Public Design Commission at 11:45am*

Hear the proposal first hand from the applicant, and add your own voice!

The hearing will be held in the conference room on the third floor of City Hall.  When you arrive, please sign in, or email them in advance to alert them that you plan to attend!

*schedule is subject to change, arrive at least 45 minutes early