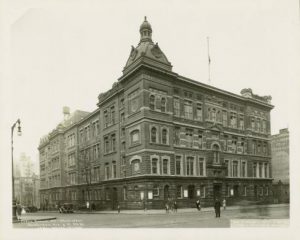 As edgy as the Upper West Side was in the 60’s, it wasn’t all “West Side Story.” Brian Gari, who grew up to make a name as songwriter of 900 songs, and as a performer and writer, 60 years ago was part of a P.S. 93 Elementary School music group.  Wearing blue handmade paper hats reading “PS 93” the kids went with their music teacher to play their guitars and recorders down the corner on Broadway. It was 1962. Their huge, Victorian school built in 1890 would soon be razed.

Gari says that the halls and classrooms were not well lit. It was gloomy. The issue of bullying had not come to the fore and students were often provoking each other by throwing paper clips attached by rubber bands and taunting classmates with insults. Gari recalls one teacher was outright racist “he threw a Black boy across the room.”

In the midst of this, for certain students, creativity still had a way of thriving.  At age 10, Gari loved cartoons. His drawings appeared in the school newspaper. He drew his own whimsical images on t-shirts and sold them to his schoolmates for 50 cents each.  What did he do with the money? He went a couple of blocks from his family’s apartment at 124 West 93rd Street to buy 45s at Woolworth’s at 90th and Broadway or at H. I. Green, another five and dime between 92nd-93rd Streets. 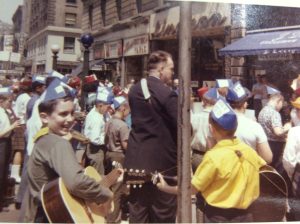 Another good memory was the enjoyment of reels of cartoons and other movies one teacher ran on an old 16mm projector for kids after school.

Almost 20 years before Gari was a student there, the future famous journalist/historian Robert A. Caro, attended P.S. 93.

The Power Broker, The Fall of New York, his biography of Robert Moses and Master of the Senate, Vol. 3 of his biography of President Lyndon Johnson, both were awarded Pulitzer prizes. Caro grew up on 94th Street and Central Park West. A New York Magazine article quoted him saying, that he got his first taste of journalism as an elementary school student. “At 10, my favorite spot was the mimeograph room. P.S. 93 had never had a school newspaper, but one day I suddenly felt that we should. I couldn’t get anyone to help me on it, so I wrote a few stories. Then you had to type them onto a stencil, then you put the form through a roller, and you turn the roller by hand, and one at a time, sheets come out with what you wrote printed on it. “Turn Every Page”: Inside the Robert A. Caro Archive, an ongoing exhibit of his writing and career is on view at the New-York Historical Society.

In a 1989, New York Times StreetScapes columnist Christopher Gray wrote: “The school was built in 1890-1892 at a cost of $170,000. This was one of the last works of the school architect George Debevoise, who resigned in 1891 shortly before being accused of collusion with building contractors and substituting inferior materials.”

In response to a search for materials about P.S. 93’s early history, a librarian at the New York Public Library’s Rare Book Division Brooke Russell Astor Reading Room, recently settled a more than 100-year-old Record Book from P.S. 93 Girls Department on a special protective desk lectern. What’s learned from the faded pages that contain numerous commencement programs among other miscellaneous items, is that P.S 93 was originally built as a co-ed, K-9th grade grammar school. From 1917-1941, P.S. 93 also housed Joan of Arc Jr. High School, then an all-girls school that shared joint commencement events with P.S. 93‘s Girls Department.  Around 1941, Joan of Arc moved into the newly built high-rise across the street that was open to a co-ed population of students. P.S. 93 went on to serve as a co-ed grammar school for its final 20 years.

Gari pointed out that the courtyard behind the building where children once played at recess, remains today.  It is used as a parking lot.

In disrepair when it was demolished, P.S. 93 was replaced in 1996 by a very plain, 22 story NYCHA apartment building. According to a 1967 article in the New York Times, It was named for Eugenio De Hostos, a 19th Century philosopher, educator and advocate for the independence of Puerto Rico. The building was the first in NYC to be named for a Puerto Rican.

Coincidentally relating to Caro’s The Power Broker and his account of urban renewal’s destruction of neighborhoods, the same article notes that “It will be used in part for relocating families displaced from the West Side Urban Renewal area.”