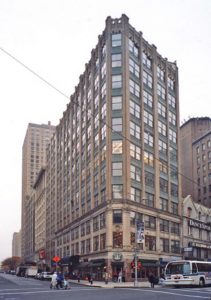 View of Cova Building prior to alterations

Identified as a National Register Eligible building in a 2008 letter from the New York Office of Parks Recreation & Historic Preservation as Fordham University embarked on their expansion plan to densify their UWS campus.  This finding was made during a Draft Environmental Impact Statement (DEIS) which examined, among many other features, historical assets within a particular radius of the planned construction.  The DEIS called out two properties, the COVA building and the Empire Hotel.  For Cova, the report noted the building’s background, the originally a 12-story office building built in stages between 1922 and 1924 by Alexander Cohen, the man who founded the Columbus Circle pharmacy, eventually occupying the storefront on the ground floor in 1939 where visitors today will find a Starbucks.

Originally, (and within recent memory) there were Corinthian pilasters on that chamfered corner rising two stories along with decorative shields, rosettes, and a dentillated cornice.  Beneath each window was an art-deco ornament plate.  After the report came out, the owners embarked on a lengthy alteration to remove much of these defining features and replace much of the three story base with tile.  All of the metal panels became stucco.  With the significant details stripped, it is less likely to ever make the National Register.  To go one step further, YIMBY has announced that a new 24-story building, more than twice as tall, will replace the Cova.