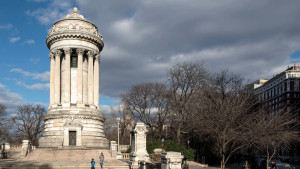 Have you ever wondered what it’s like living in the West 80’s on the Upper West Side? Residents describe the area as “magical” yet “cozy” in an article in the New York Times. This area of the Upper West Side is a unique neighborhood in New York City — while there are many residents and institutions that add to the compact city feel, there is also an abundance of green space; to the east there is the park on Riverside Drive and to the West is Central Park.

For residents, living on the Upper West Side is about accessibility–with several subway lines and metro lines–and community. Community benefits include parks, public schools, and museums, such as the American Museum of Natural History and the Children’s Museum of Manhattan. In addition, the historic fabric in the West 80’s contributes to the area’s scenic built environment. For example, the Soldiers’ and Sailors’ Monument on Riverside Drive is a unique space for residents to enjoy the views of the Hudson River on the monuments’ plaza. To learn more about the Soldiers’ and Sailors’ Monument or historic buildings on the Upper West Side visit our App on Google Field Trip.