Protect the future of Gansevoort Street 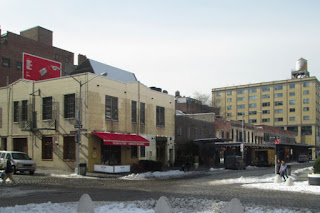 In 2001, a New York which seems to have existed an eternity ago, a much different New York Times addressed a much different Gansevoort Street in what was then a running column called “One Street at a Time”.  Author Michael Cunningham described the stretch as “a dark and melancholy beauty, [which] runs its modest course from east to west in downtown Manhattan’s desolate riverfront neighborhood and empties into the opaque waters of the Hudson.  It was for most of its life, merely remote and sinister; it is now remote, sinister, and fashionable” today one could easily argue it is choice (d)none of the above.

With portions designated a Historic District in 2003, the Landmarks Preservation Commission deemed this collection of buildings to have a unique character and sense of place worth preserving.  A new proposal by BKSK Architects would seek to alter an entire row of the districts edge- one full block and either alter, or completely eradicate the century-old structures to replace them with 122 feet of vertical development.  There are of course, times when alterations to landmarks are appropriate but assembling a full block within a known historic district should not be carte blanche to start from scratch.

LANDMARK WEST! is joining with the Greenwich Village Society of Historic Preservation in challenging this proposal set to appear before the LPC on Tuesday, November 10th.  Please join us and show your support by signing their petition for 46-72 Gansevoort Street.

Text of the message which will directly reach Mayor de Blasio and LPC Chair Srinivasan is as follows:

I strongly urge you to reject the proposed redevelopment of 46-74 Gansevoort Street or any proposal resembling it.  The current plan would fundamentally transform and destroy the qualities which make the Gansevoort Market Historic District what it is, and should be sent back to the drawing board.

The massive scale of the proposed new buildings and additions and the demolition of existing structures would overwhelm this charming cobblestone street which forms a gateway to the Meatpacking District, the West Village, the High Line, the Whitney Museum, and the Hudson River Park.  To allow such a dramatic compromise of the scale and historic qualities of this block at the heart of this historic district would destroy the entire purpose and meaning of landmark designation.