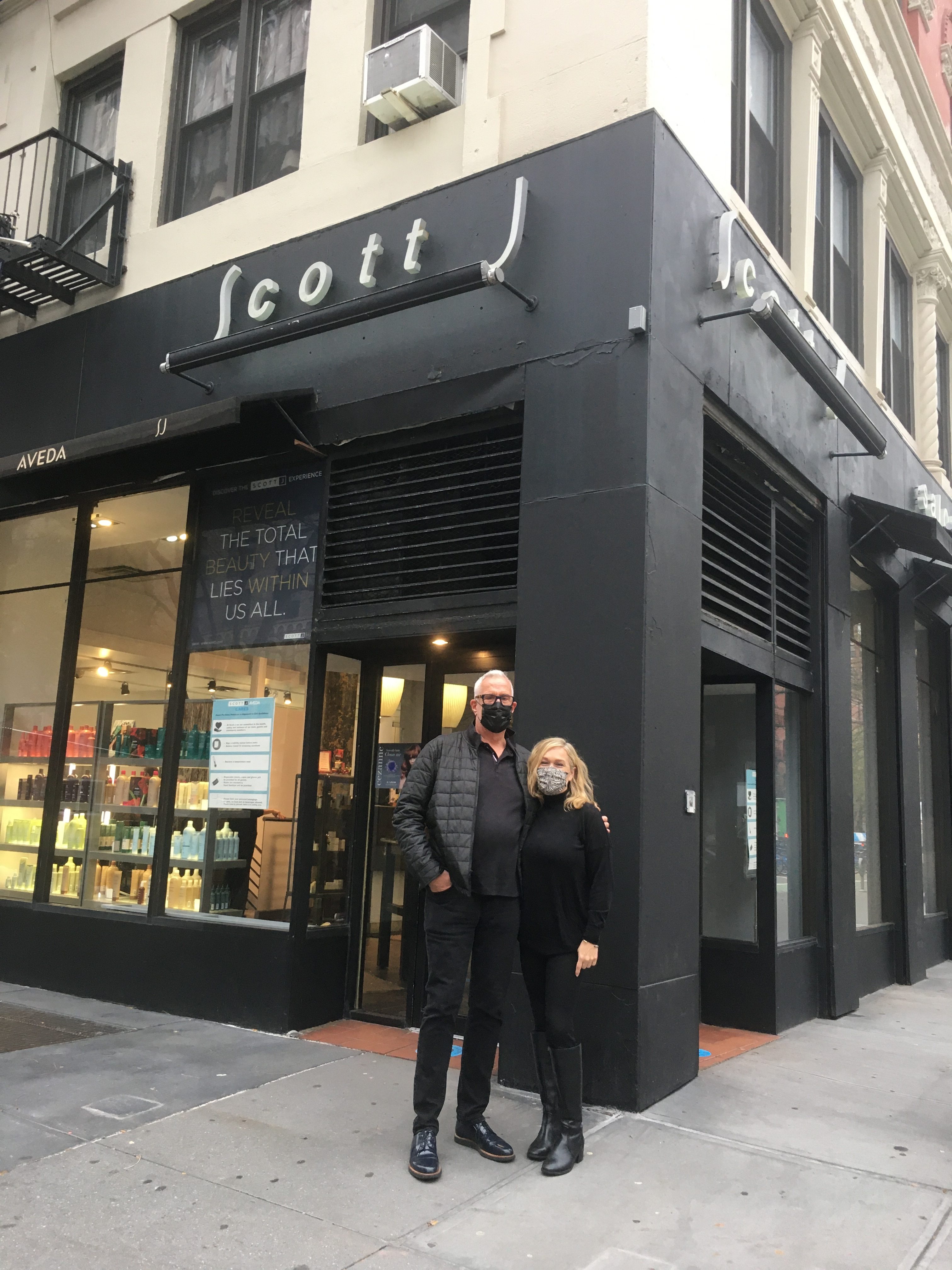 Upper West Sider Scott J. Buchanan, owner of Scott J. Aveda salon at 257 Columbus Avenue, has been in the beauty business for 40+ years.  Scott maintains an office above the salon, which occupies the ground floor.  He is an engaging man, very well-liked by employees and their customers whom he considers guests.  He has been a staple of the Upper West Side community for 30 years and many of his guests and team have worked with him for years.
Scott’s approach to business is that if you are doing something you love, you’ll find a way to make it work. Even when faced with demanding challenges.   Speaking about how he found the profession that has suited him so well, Scott says, “My mother died when I was young.  I quit school and was lost for a while.”  By chance, he enrolled in beauty school at Wilford Academy, then located on 6th Avenue in Midtown.  “I realized then that I was good at doing hair and I loved servicing the guest.  To this day, it fulfills me.”
He started out working in his home area of Long Island and moved into the city 35 years ago.  Scott bought his first salon on the UWS not far from the current 72nd Street location, which he has twice modernized over the years.  His initial move in the late 1990’s, from a 750 sq. ft. space into the 2800 sq. ft. space on Columbus Avenue, also brought with it the thrill that the location had long been occupied by Charivari, a clothing boutique known for featuring hot new designers. It had brought high fashion to the Upper West Side, sharing customers with the classiest 5th Avenue and Madison Avenue shopping venues.
In the years that followed, Scott established more salons and now has a total of four in Manhattan.
Generally speaking, trends come and go and Scott and his team are continually studying the latest trends in both styles and colors.  Healthy and shiny hair is what his team focuses on, accomplishing both through the Aveda treatments and products sold in the salon.
Much has changed since the start of Covid.  For one thing, Scott said, he is very appreciative of New Yorkers who do their part to help curb this pandemic by following NY State’s initiatives to enforce standards for safety. He emphasized that he, too, is committed to maintaining “the gold standard for safety and containment” in his salons for his team and the community. “Customers and my staff appreciate this,” he said.  However, with restrictions that permit only 50% capacity, there is no question that managing the business is difficult: “I’ve only been able to hire back 50 percent of my staff since I was allowed to reopen and we have to work differently than we did before.”  He explains that a salon business like his depends on the draw provided by talented staff and customers’ loyalty to great service. He and his team are currently only able to do about half of the business he used to, as operations are necessarily undercut by staffing and space capacity restrictions.
Scott’s landlord has been willing to work with him by adjusting the rent. “Without this landlord, it wouldn’t be possible,”  he said.  Adaptability is the name of the game these days, whatever the business.  ~ Claudie Benjamin