The Luck of the Upper West Side: Edward Kilpatrick’s Architectural Legacy

In honor of St. Patrick’s Day, we want to tell you about a fellow Irishman and builder in New York City, Edward Kilpatrick. Not only was Kilpatrick born in Ireland, but he was also a close personal friend of New York character, Horace Greeley, who is portrayed in the Hollywood movie “Gangs of New York.”

At the age of eleven, Kilpatrick moved to New York City in 1840 from Killea, Ireland. He immediately learned the carpentry trade, a skill which led him to a career as an architect and developer in New York City. Thanks to his close friendship with Horace Greeley — the creator and editor of the New York Tribune at the time — Kilpatrick moved up the ranks in New York City real estate and development.  Kilpatrick also formed a friendship with the famous abolitionist Frederick Douglass and even “escorted Frederick Douglass safely through the city and to his home in Rochester at the time of the riots here in 1863 at the request of Mr. Greeley,” as described in his obituary.

Kilpatrick felt a close kinship with his fellow Irishmen in the city and was responsible for building the new Five Points People’s Church in lower Manhattan. He was deeply intertwined with the church and the Upper West Side — he was even a member of the historic St. Paul’s Methodist Episcopal Church (located at West 86th Street and West End Avenue).

Kilpatrick designed most of the houses he built and is known for his row houses and flats on the Upper West Side, although he also built houses in Murray Hill and the Upper East Side. 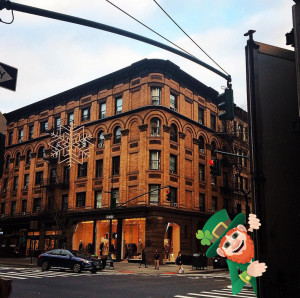 Kilpatrick’s style combines Renaissance and Romanesque Revival elements. For example, the Landmarks Preservation Commission states that his row houses on 68th street are characteristic examples of his work, “showing the interrelationship between the two building types.” At 75 and 77 West 68th Street, built in 1893, the Romanesque Revival features include recessed arched windows, rusticated stone bases and dwarf columns, both in brownstone, and gold brickwork. The contrasting brownstone and gold brick result in a polychrome facade, which was fashionable towards the end of the nineteenth century.  In addition, the three-story pilasters and carved ornament are elements of the Renaissance Revival style.

Kilpatrick is responsible for over ten extant buildings in the Upper West Side/Central Park West Historic District. Unfortunately, most of his row houses in Murray Hill and the Upper East Side have been demolished. Kilpatrick’s obituary describes him as an endearing character, and in the last quarter of the nineteenth century he was “recognized as one of the largest builders of private houses” in New York City. Furthermore, his obituary states, “he was so thorough as a builder that when he placed on the market for sale any of his houses they would command the highest market price.”

Kilpatrick vocalized his issues with the building trade and building laws in New York City, testifying numerous times at the Lexow Committee, a senate committee that dealt with police corruption, in the second half of the nineteenth century. The Lexow Committee eventually led to the defeat of Tammany Hall in 1894. Kilpatrick was an honest man and one of the few builders who refused to pay a tribute to the police force in the city during the corruption in the late 1800’s.

When he died of paralysis in 1898, Kilpatrick was “recognized as a friend of the workman”; he was described as an old-fashioned Irishman, “quiet in his life and plain in his taste” in his New York Tribune obituary.

This post was written by Elizabeth Canon, our graduate student intern who is studying Historic Preservation at Columbia University.