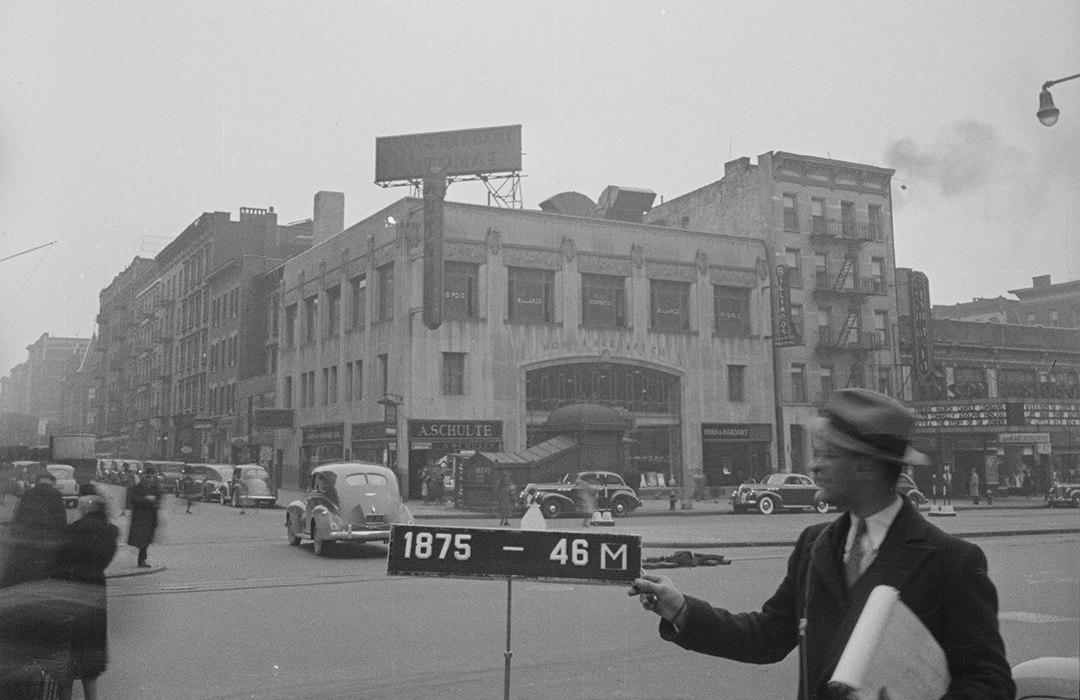 On November 14, 1912 the New-York Tribune announced that “Joseph V. Horn, of Douglasville, Penna, and Frank Hardart, of Philadelphia…are to build a big bakery on the Cosine Farm.”  The partners had leased land from William Waldorf Astor at the corner of 50th Street and Eighth Avenue where they planned a 6-story, $300,000 building.  “It is to be the distributing point for supplies to a chain of automated lunchrooms to be opened in this city,” said the newspaper.

Hardart was a partner with Joseph Horn in the Philadelphia bakery Horn & Hardart Baking Co.  He envisioned the idea of a waiterless cafeteria catching on in the States.  Hardart purchased the innovative equipment in Berlin to be shipped to Philadelphia.  Unfortunately, the ship transporting the machines sank.  Not to be defeated, Hardart reordered the equipment and in 1902 the first automat opened in Philadelphia.

As Frank Hardart expected, the new take on casual dining was a sensation.  Now, in 1912, the firm was ready to branch out to New York City.  The first automat was opened on Times Square at No. 1557 Broadway.  It was the firm’s first experiment with American-made equipment.  Shop girls, office workers and laborers found they could stretch their meager pay in clean, attractive surroundings where five cents would buy tasty, freshly-made food.

Hardart purchased the innovative equipment in Berlin to be shipped to Philadelphia.  Unfortunately, the ship transporting the machines sank.

The coin machines accepted only nickels and women “nickel throwers” were on hand to make change. Because the coins dirtied the cashiers’ hands, they wore black uniforms.  Despite the low food prices, Horn & Hardart did not scrimp on the interiors.  Marble, white tile and shining chrome were kept spotless and the cafeterias were often termed “classy.”

Joseph Horn’s approach to the restaurant business was simple.  “There is no trick to selling a poor item cheaply.  The real trick is to sell a good item cheaply.”

Originally the firm employed the Philadelphia architects Stuckert & Sloan to design the cafeterias.  But in 1916 it turned to a New York firm for its Manhattan projects.  Frederick Putnam Platt had taken his brother, Charles Carsten Platt, into his architectural business around 1919, creating F. P. Platt & Bro.  The brothers would design numerous automats for Horn & Hardart and as the Jazz Age engulfed Manhattan, their designs turned to the sleek and modern Art Deco.

In 1930 Frederick co-wrote an article in the Architectural Record entitled “Restaurants,” which laid out the fundamentals of designing a viable food selling establishment.  That same year Horn & Hardart gave the firm another automat to design–this one at the southeast corner of Broadway and 104th Street. 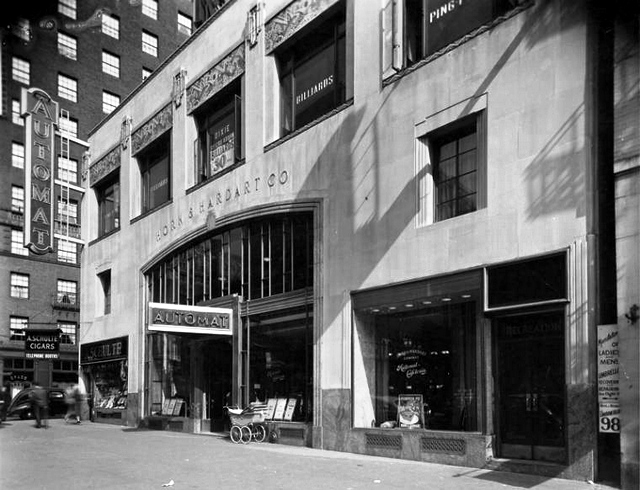 If the Great Depression had any effect on the automat business, it increased it.  The quick and inexpensive food offered by Horn & Hardart was helpful to patrons who needed to account for every nickel.  Quite possibly, as well, the jazzy Art Deco buildings and the clean chrome-and-tile interiors helped brighten the diners’ dismal outlook.

Plans were filed for the new automat stretching along Broadway from No. 2710 to 2714 in April 1930.  Five months later construction was completed, in October, at a cost of around $105,000.  On October 23, 1930 the finished structure was described in Department of Buildings as having “offices and showroom” above the street level and mezzanine restaurant space.

But then someone changed his mind.

Almost one month to the day later, on November 22, the papers were refiled.  Now instead of offices, the second story would contain a “golf course.”

Despite the huge one-and-a-half story arched entrance and the expansive second story windows, the Platts’ limestone-clad structure might have been ponderous were it not for the colorful terra cotta decoration.  Executed by the Atlantic Terra Cotta Co., the large panels exploded in color–green, tan, and blue, with an unusual gold lustrer glaze.  The flat gray limestone face served as a canvas for the sophisticated Art Deco flowers and zig-zag patterns.

Quite possibly, as well, the jazzy Art Deco buildings and the clean chrome-and-tile interiors helped brighten the diners’ dismal outlook.

The Horn & Hardart automat served the Upper West Side successfully for decades.  Then in December 1954 the lease was cancelled.  A year later ownership of the building was transferred to the Broadway-104th Corp.  With the cafeteria now gone, developer Stanley Stohl commissioned architects Wechsler & Schimenti to convert the former automat space.

Horn & Hardart’s Art Deco interiors, now passé, were ripped out and the mezzanine was closed off as a separate, now second, story.  In the $10,000 alteration the upper floors became offices and commercial space replaced the restaurant level.

Beginning in 1956 the New York Public Library briefly housed its Bloomingdale Branch children’s room here.  Over the next decades a profusion of stores and businesses would come and go, including the Ames Business School on the second floor for nearly a decade and the El Taller Latino Americano, a non-profit art and education center founded in 1979.

As the 20th century drew to a close Rite Aid pharmacy took the lease of the expansive ground floor.  In a David versus Goliath triumph, local community activist, Michael Gotkin, persuaded the chain to cover, rather than destroy, the original F. P. Platt & Bro. elements.

One of the last Horn & Hardart buildings to survive in Manhattan, the Art Deco beauty at Broadway and 104th Street stands as a reminder of a time when a slice of apple pie could be bought for a nickel.

Think Local First to support the business currently at 2710-2714 Broadway: