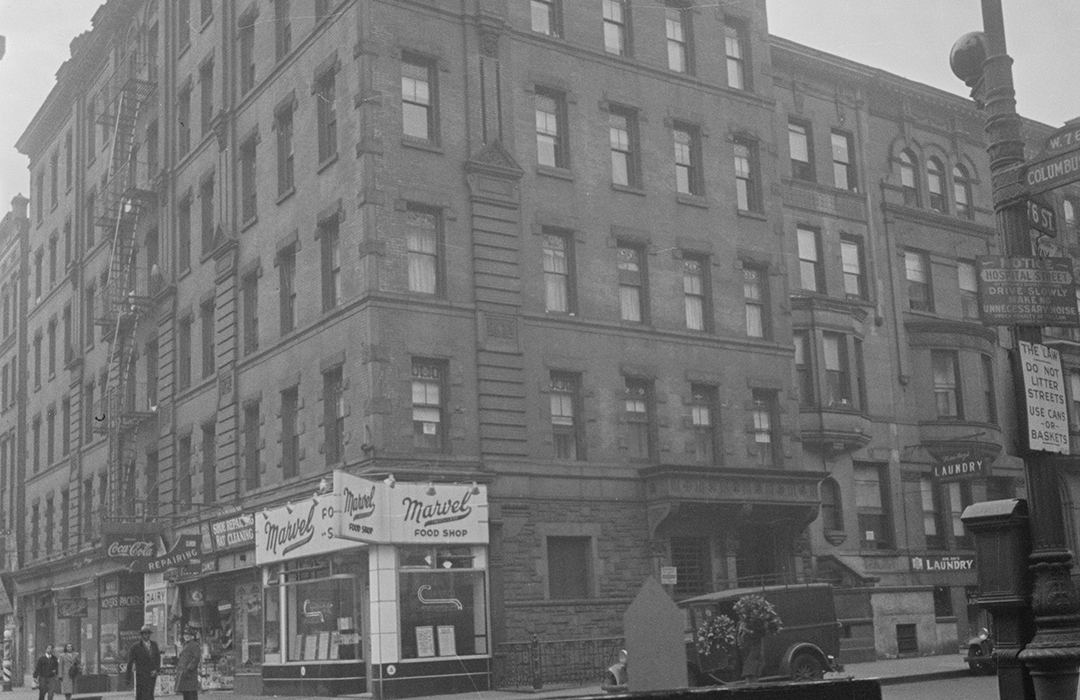 On May 5, 1888 the Real Estate Record & Builders’ Guide announced that “C. Abbott French & Co. are preparing plans for a large flat…to be built by Lawrence Kelly on the southwest corner of 9th [later Columbus] avenue and 76th street.  It will be of brick and stone and will have modern improvements, the first floor containing stores.”  Those modern improvements would have included running hot and cold water and electricity.

The six-story structure was completed the following year.  C. Abbott French & Co. had blended two currently popular styles, neo-Grec and Queen Anne.  And while the overall bulk of the building was rather ponderous, decorative elements and stone bandcourses relieved the mass.  Every window boasted a variety of colorful stained-glass transoms.

The sprawling apartments filled with professional, upper-middle class residents.  Among the most celebrated was Dr. Henry Richardson Rogers.   In its June 1889 issue The American Magazine said of him “Probably there is no man professionally before the public whose life has been so eventful and full of interest as that of Dr. Rogers.”

But while living here Rogers embarked on a more lucrative—albeit illegal and dastardly—career.  He staged fake seances in his apartment charging grieving customers the equivalent of $30 today to hear messages from their loved ones.

But while living here Rogers embarked on a more lucrative—albeit illegal and dastardly—career.  He staged fake seances in his apartment charging grieving customers the equivalent of $30 today to hear messages from their loved ones.

Peruvian immigrant Pedro Rubio, Jr. was much more respectable.  He was the president of P. V. Rubio & Co., dealers in the “mahogany and fine wood trade,” lived here.  Sharing the apartment was his sister, Castora Amanda, and 12-year old Hilaria Orlaineta.  Pedro and Castora were born in Peru, the children of whom The New York Times called “one of Peru’s ablest and best-known lawyers.”  Hilaria Orlaineta, for whom Pedro had guardianship, was from Mexico.  According to The Times, in 1905 she had been “committed by her parents at Tabasca, Mexico, to the care of Mr. Rubio.”

A somewhat bizarre situation arose in September 1908.  Castora was engaged to Almazor Puga, who lived in Peru.  The couple posed a difficult question to City Clerk Scully on September 24–whether or not he would marry them by proxy.  New York officials admitted that marriage by proxy was “perfectly legal” in Peru, but agreed that such a marriage would not be recognized by the courts of the United States.  Federick Bergmann, former Consul General of Peru, had power of attorney for Puga and offered to stand in for him at the civil service ceremony.  It appears, however, that Castora was forced to travel to Peru to be married. 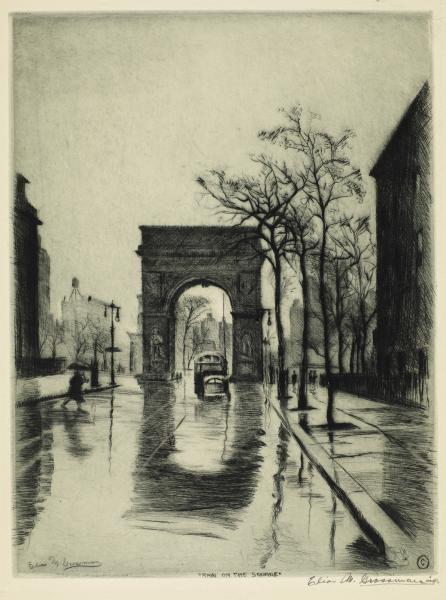 Rain on the Square by Elias M. Grossman 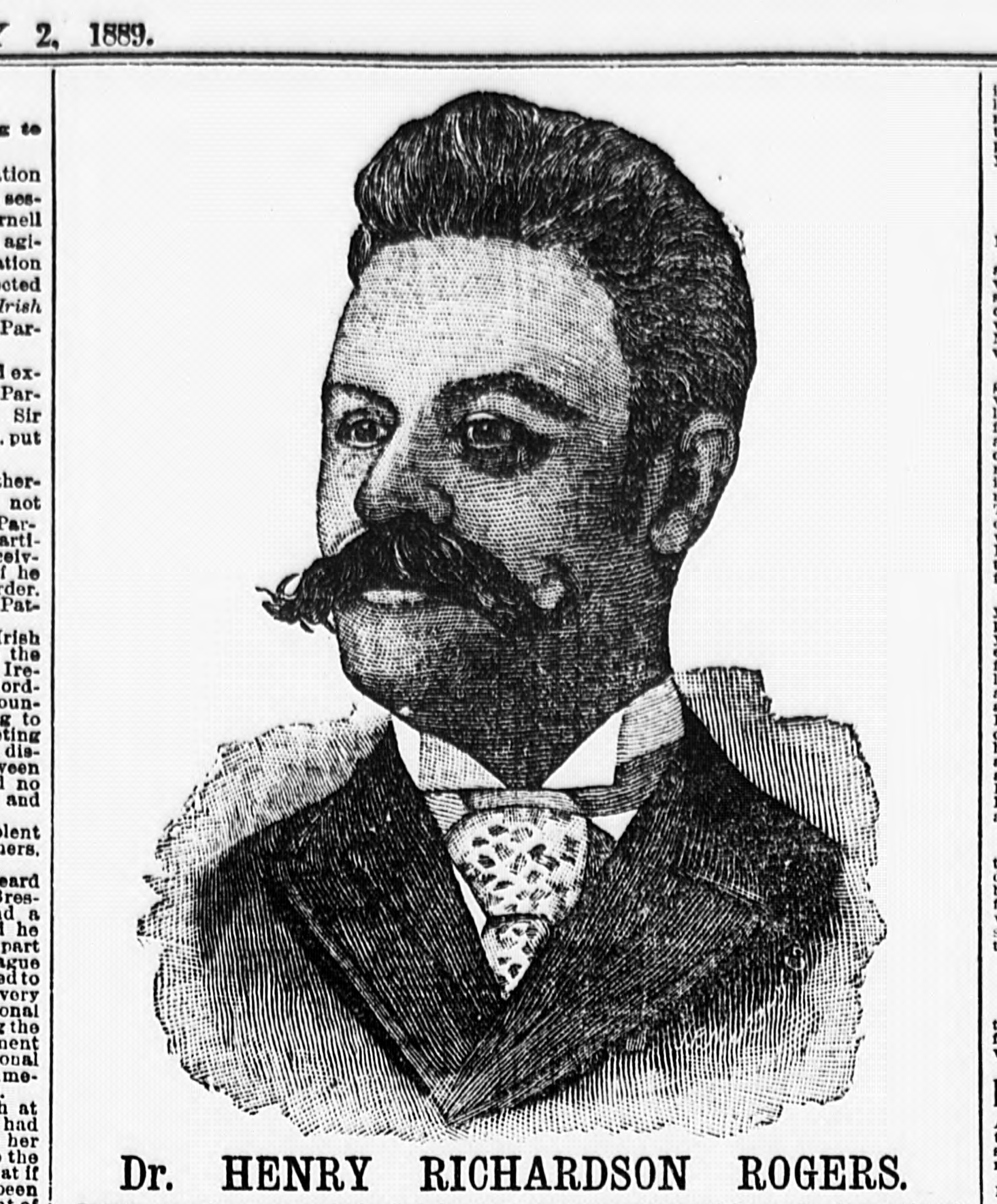 Pedro and Hilaria were in the newspapers two years later when the girl, now 14, disappeared.  She had left the apartment wearing three dresses, one over the other, and The New York Times suggested “there is a possibility that she may have started to walk to her old home in Mexico.”  She had some small change on her when she disappeared, what police said was “enough to take her only a dozen miles or so on her way to Mexico.”

But Pedro was not so sure that was her plan.  “He thinks she may have run away with a boy friend,” said the newspaper.  “Several months ago, Mr. Rubio discovered that she was receiving the attentions of a young druggist’s clerk whose first name is Victor.  Mr. Rubio told his ward that she would have to stop meeting him.”  It is unclear whether the runaway was found.

Another successful immigrant was etcher Elias M. Grossman and his wife, Josephine.  Born in Russia, he had grown up on the Lower East Side, studying art at the Educational Alliance.  Before he was 25-years-old his work had been accepted for exhibition at the National Academy of Design, the Pennsylvania Academy of Fine Arts and similar institutions.

Another successful immigrant was etcher Elias M. Grossman and his wife, Josephine.  Born in Russia, he had grown up on the Lower East Side, studying art at the Educational Alliance.

He was especially known for his drawings of aged Jewish persons and by the mid-1940’s his works were owned by the Metropolitan Museum of Art, the New York Historical Society, the New York Public Library, the Library of Congress and the Fogg Museum.  Grossman died on September 19, 1947.

The last quarter of the 20th century saw a variety of boutiques in the ground floor.  Designer Koos van den Akker’s shop was here by 1972; One Woman Boutique in 1978; and the Danny Noble boutique opened on July 15, 1987.   In 1995 Milanese fashion designer Martino Medali opened his boutique here.

The fashion shops shared spaces with home goods stores.  In 1997 Broden Store was here and the following year Bel Decor opened.  The storefronts have been modernized and replacement windows keep the drafts out upstairs.  But overall little has changed to C. Abbot French’s 1889 structure.  And, thankfully, when the windows were replaced those marvelous stained-glass transoms were preserved.

Shop local to support the businesses currently at 328-338 Columbus Avenue: