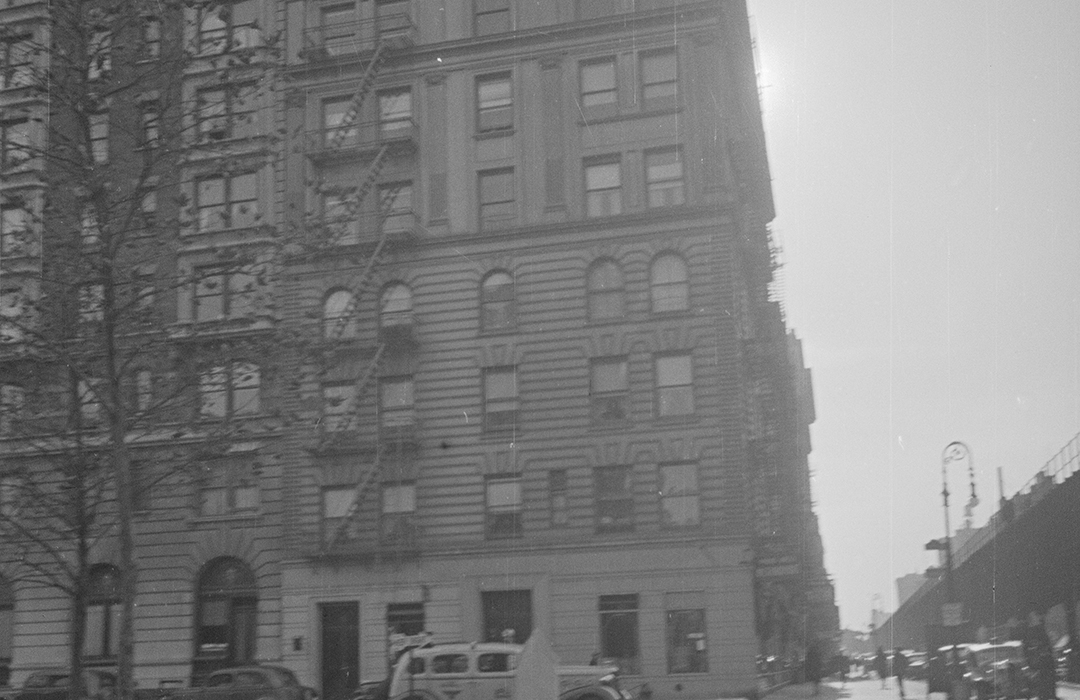 Residents of the Upper West Side were the first in New York City to embrace the concept of apartment living as the 19th century drew to a close.  Builder Terence Farley had been highly involved in the development of the Upper West Side in the 1880’s and his sons, John and James, continued the family business in the 1890’s as developers Terence Farley’s Sons.  In 1894 they hired the architectural firm Thom & Wilson to design a high-end apartment house at the southeast corner of Columbus Avenue and 77th Street.

The brothers’ financial outlay–$75,000 for the land and $100,000 in construction costs—amounted to nearly $5 million in today’s money.  Completed in 1895, the Renaissance Revival style building stood seven floors high, its brick upper section trimmed extensively in ruddy-colored terra cotta.  The limestone base housed two stores on Columbus Avenue and a porticoed residential entrance at 64 West 77th Street.

The first occupant of the corner store was Hy. H. Butler’s pharmacy, which remained through 1899.  In 1900 the shop of soap, fragrance and “night cream” maker Caswell-Massey moved in. The firm remains the fourth-oldest continuously operating company in America, and this shop was one of its earliest in NYC after its founding in Newport, RI.  In the store next door was Wertheim & Co., art dealers.

Mrs. Heidenheimer later told a reporter “that Mr. McNulty not only ogled her, but that as he passed her and her husband, he kept turning his head about, and that the glances he leveled at her left no mistaken notion as to their significance.” Heidenheimer approached the politician and demanded an explanation.

The apartments were occupied by well-to-do families, among which by 1900 was the household of Leander A. Bevin, who by June 1910 was also noted as having a country home on Eaton’s Neck on Long Island.

His neighbor, German immigrant Louis Heidenheimer, had come to New York from Frankfort and established himself as a successful wholesale commission merchant on South William Street.

In the summer of 1897 Heidenheimer took his wife to Bath Beach, Brooklyn, to escape the city heat for a few days.  On the evening of July 6 they were walking on a pier when Senator Peter H. McNulty, who had been yachting with friends, made a pass at Mrs. Heidenheimer (described as “a handsome young woman” by The New York Herald).  The senator had not anticipated the ramifications of his flirting.

Mrs. Heidenheimer later told a reporter “that Mr. McNulty not only ogled her, but that as he passed her and her husband, he kept turning his head about, and that the glances he levelled at her left no mistaken notion as to their significance.”  Heidenheimer approached the politician and demanded an explanation.  McNulty answered “you’re a cur.”  Heidenheimer decked him with a fist to the jaw.  He told the judge, “I think I was wholly justified.” 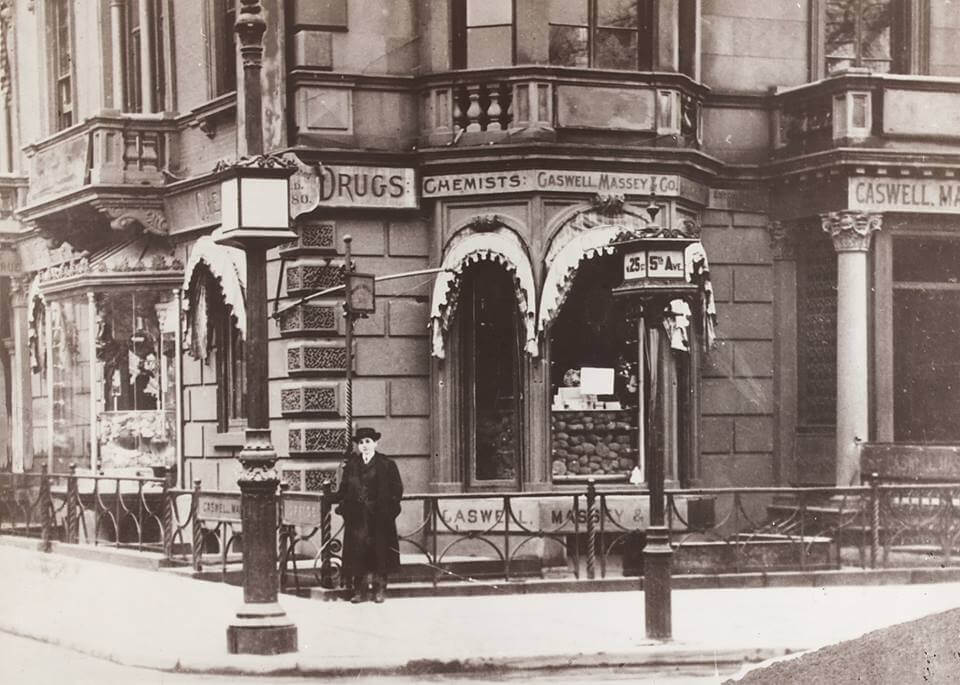 An early 1900's Caswell-Massey shop on 5th Ave., similar to one on Columbus Ave. 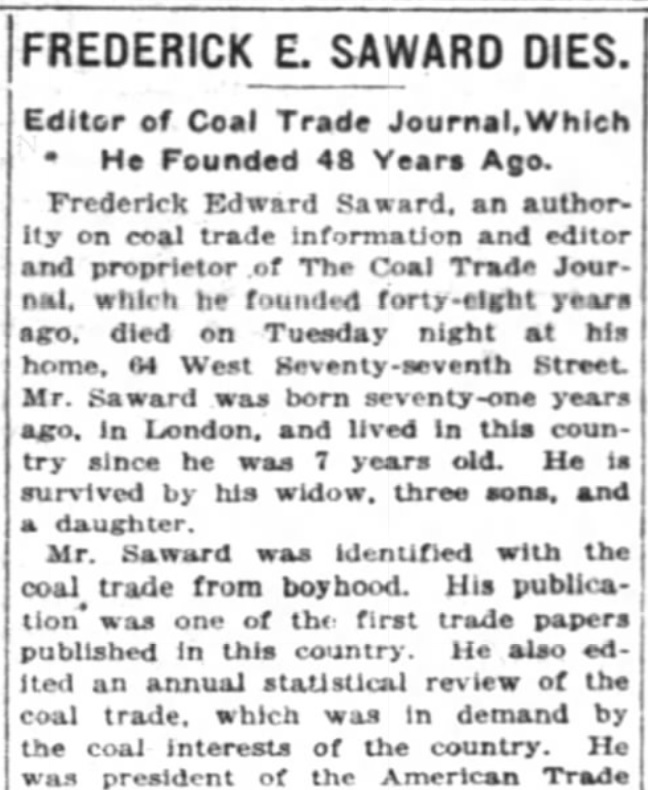 The passing of Frederick E. Saward is noted.

The James Boyd family lived in the building for years, garnering more benign newspaper coverage.  In December 1899, for instance, The New York Herald reported on Mrs. Boyd’s entertaining of the Whist Club, “one of the most pleasant organizations in the upper part of the city.”  Daughter Katherine was married in 1911 and her sisters, Jessie and May, were both attending Bryn Mawr College in 1914.

Other long-term residents included the family of Daniel T. Tuthill.  A well-known wheat operator on the New York Produce Exchange, he was a member of the Mystic Boat Club.  Although he contracted pneumonia and died on September 27, 1898, his wife and two children remained in the apartment into the 20th century.

By 1913 Milton R. Cohen had taken over the corner store where he ran his butcher and grocery business.

Investigating, he found Green holding onto a struggling Margaret while her two companions battled to free her. As it turned out, it was not Green who was the villain in the melodrama, but Margaret.

Ziegfeld Follies chorus girl Margaret Randolph lived in the building around the same time.  She found herself in trouble on March 17, 1916 after she and two other Follies girls were the objects of Texas oil man William A. Green’s attentions.  The Evening World reported, “A regular chorus girl party with all the trimmings of taxicabs, cabarets and a wine breakfast came to an end in the chill of early morning at Eighty-second Street and Columbus Avenue shortly after 7 o’clock today” when Patrolman Morrison was alerted by the screams of women.  Investigating, he found Green holding onto a struggling Margaret while her two companions battled to free her.  As it turned out, it was not Green who was the villain in the melodrama, but Margaret.  She had helped herself to $45 in cash from Green’s pocket.

Another successful immigrant who lived in the building was Frederick Edward Saward, along with his wife, Frances.  Born in Kent, UK in 1846, he was brought to America by his parents at age 7.  He went into the coal business when he was still a boy, but was determined to succeed.  In 1869 he established The Coal Trade Journal, one of the first trade papers published in this country; and was still its editor and publisher while living here in 1917.

The building was renovated in 1935 by architects Schwartz & Gross to accommodate six apartments per floor (a configuration which is still in place).  In the last quarter of the 20th century the two storefronts were home to high-end retailers Jean-Paul Gaultier and Kenneth Cole.  The retail space was later combined into a restaurant in 2020.

Shop local to support the businesses currently at 351-357 Columbus Avenue: