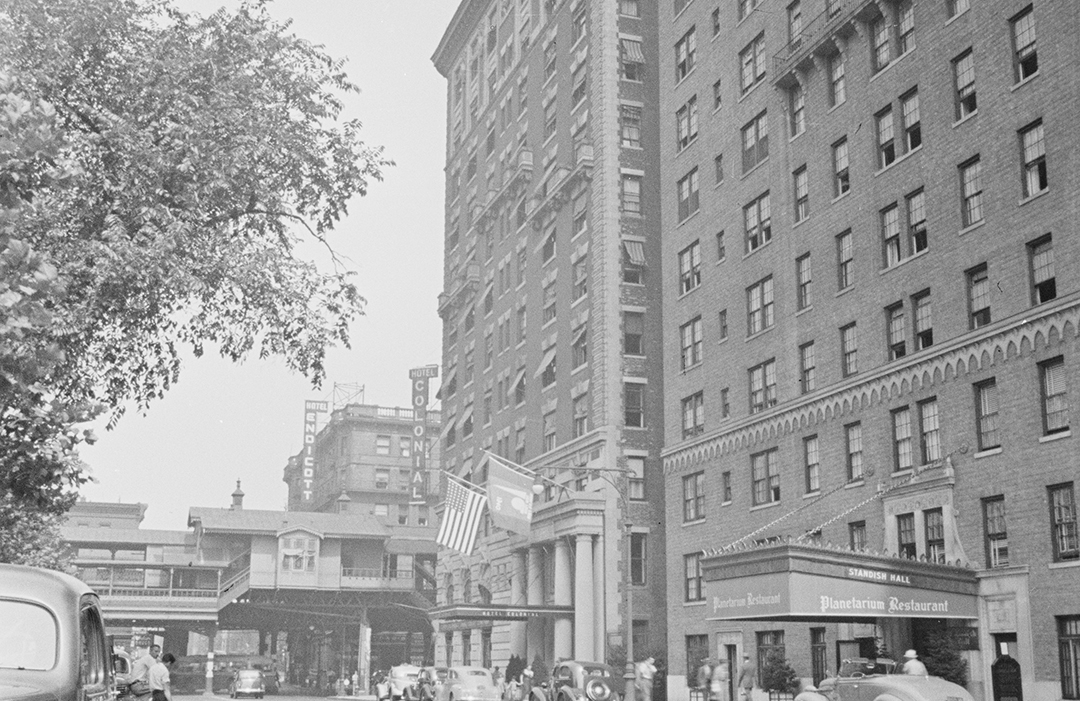 The Hotel Colonial went up over the course of two years between 1903 and 1905 at the corner of Columbus Avenue and West 81st Street. By the time of Hotel Colonial’s completion, the architect, Frederick C. Browne, had already completed a handful of other residences in the Upper West Side, most notably Hotel Hargrave on 72nd Street, a beautiful Beaux-Arts affair with a fantastic Mansard roof of now-oxidized copper. Hotel Colonial is a more subdued exercise. Constructed in a combination of brick, stone, and terra cotta, this solid mass of red and white takes up a sizable piece of real estate immediately adjacent to the American Museum of Natural History.

The apartments’ entrance, a robust entablature supported by four Doric columns, is the structure’s most impressive aspect. Jutting out from the middle two columns is a cornice-turned-canopy that shielded well-heeled tenants from the elements as they entered the property. It’s an entrance that would have been already familiar to Browne who had accomplished something strikingly similar at Hotel Somerset, 150 West 47th Street, which opened a half-decade before in 1900. Indeed, much of Hotel Colonial’s construction is reminiscent of its Midtown predecessor, right down to its rusticated base and mix of brick and masonry stone.

The 125-unit Hotel Colonial was advertised upon completion as being “ABSOLUTELY FIREPROOF” with furnished or unfurnished suites of one-, two-, or three-bedrooms.[1] Furthermore, the residence positioned itself as a “delightful summer abode”, a place where snowbound Midwesterners could thaw out come June.[2] One of Hotel Colonial’s biggest social draws was its eponymous restaurant which offered table d’hote dinners for the price of a single dollar. Multiple New York Tribune advertisements describe the offerings as a “connoisseur’s feast!”[3] where visitors could enjoy a “fine view of the park […] from the twelfth story”. Not to be forgotten, of course, was the Hotel Colonial Restaurant’s program of live music.[4]

The brooches of Mrs. Stella Pringle were pilfered from her residence in 1908. Valued at $1,500 (or over $43,000 today), the brooches were eventually found in the bedroom of Hotel Colonial chambermaid, Catherine McNally. McNally’s defense argued that she likely had no idea the brooches were even there as she was “half witted and […] did not know what she was doing in keeping the jewelry.”

Over the one-hundred plus years of Hotel Colonial’s existence, the building has played host to a large cast of eccentric characters with stories both comic and tragic. Mr. and Mrs. Frederick P. West were two such residents of the building and their names (along with Hotel Colonial) made headlines in 1906 when they returned home to find a Mr. William Tate ransacking their belongings. Mr. West, referred to in the press as a “small man of slight build”, grappled with the would-be burglar and delayed Tate’s thievery long enough for officers to apprehend the criminal. Tate, as it turned out, was a prolific “hotel sneak” and had been the culprit behind numerous New York City break-ins at the time.[5]

Another tenant, Stanford Wise, earned himself a good deal of poor publicity after crashing his car in the middle a high-speed chase. Wise reportedly reached a harrowing thirty miles per hour before ricocheting off of some fencing and into a street curb.[7]

In 1914, Scottish immigrant Walter Laidlaw, Secretary of the International Steam Pump Company and resident of Hotel Colonial, was the victim of a sudden heart attack on an elevated train platform at 33rd Street and 6th Avenue. His employer, International Steam Pump Company would likely have been a big name to readers of the time as its founder, Benjamin Guggenheim, was one of the most famous casualties in the sinking of the RMS Titanic only two years prior. Jacob Leester was another immigrant success story that lived at Hotel Colonial. Born in Westphalia, Germany, and President of the New York Independent Meat Company, Leester passed away at his residence in 1919.[8] 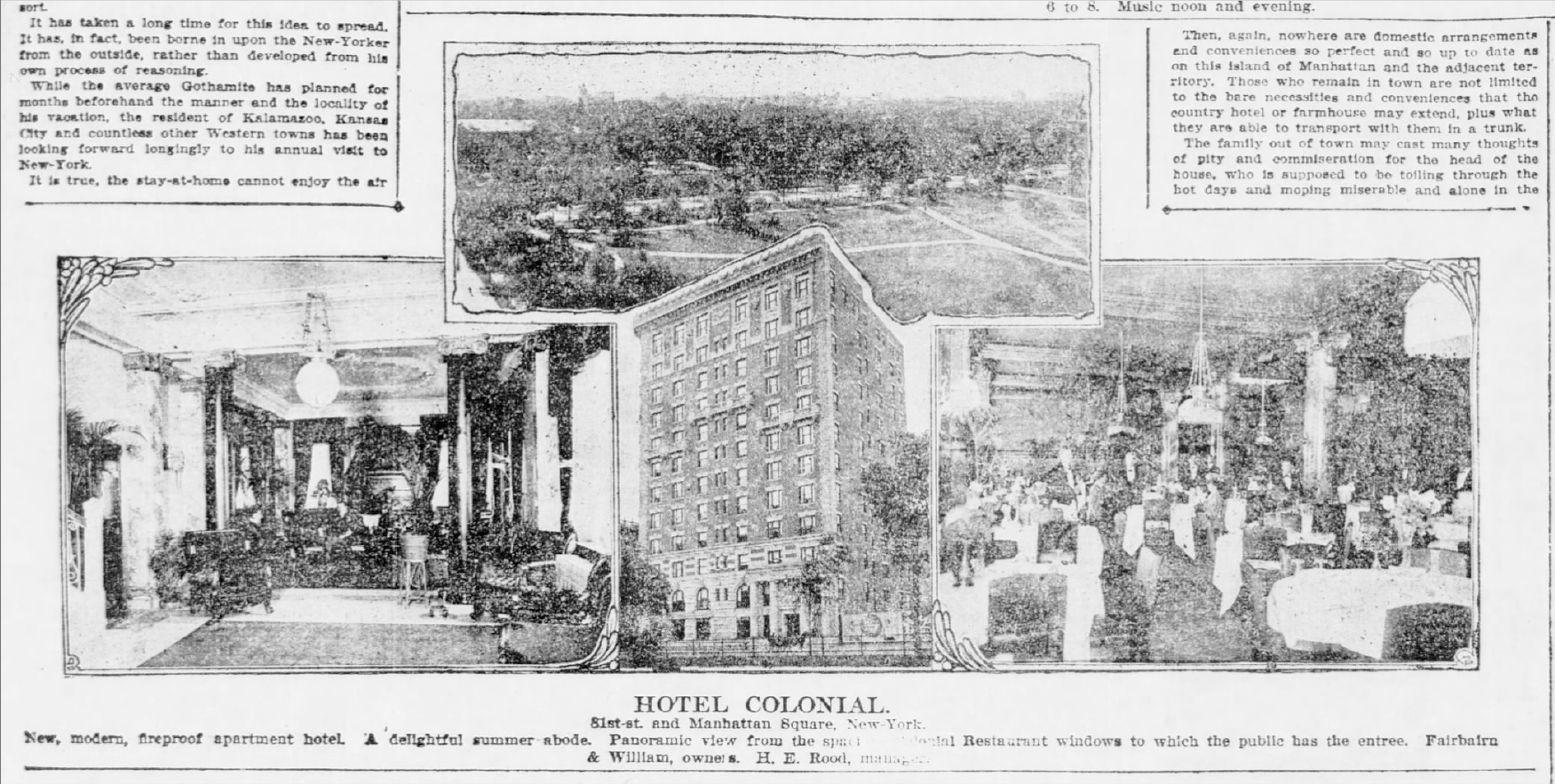 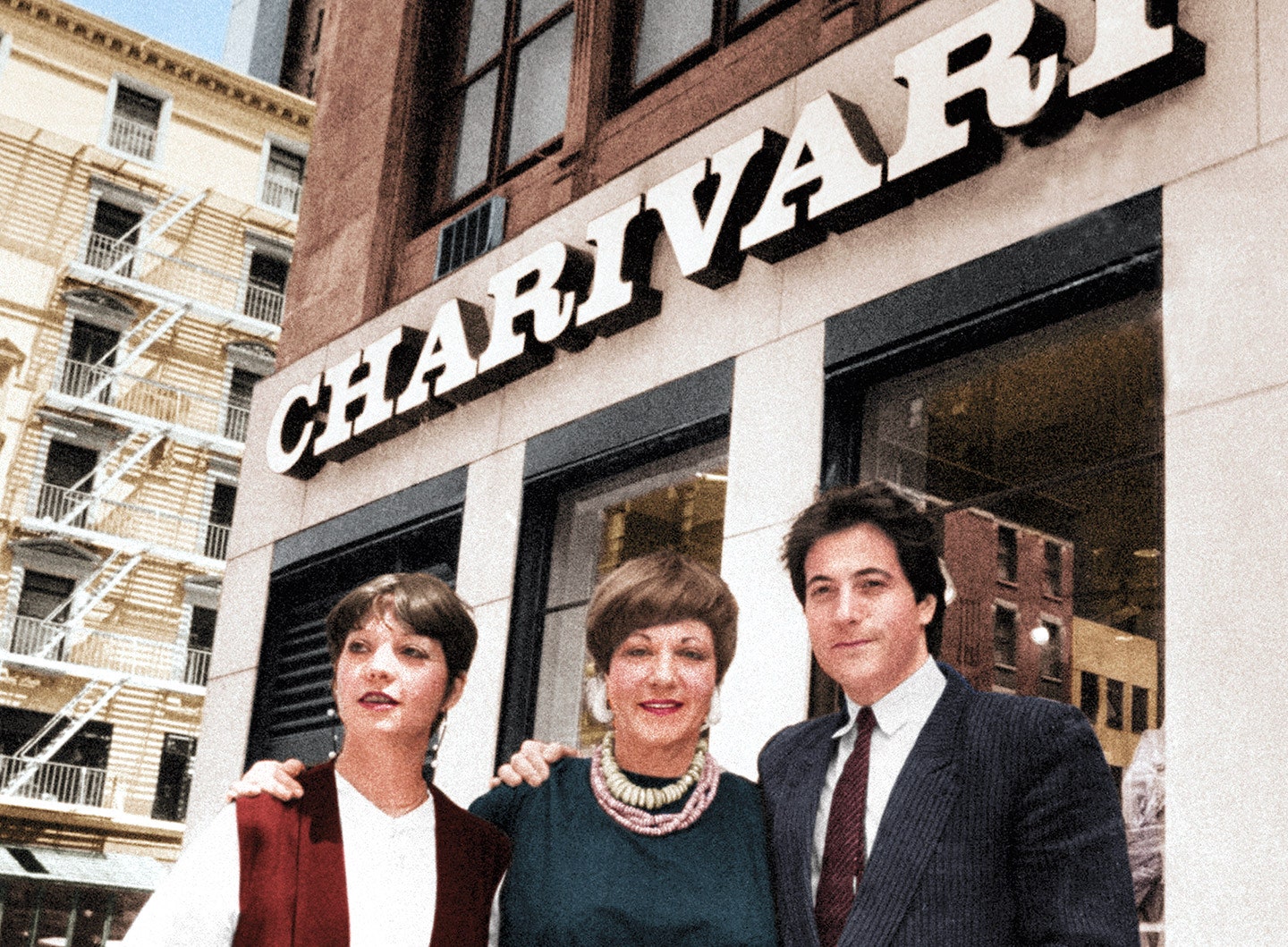 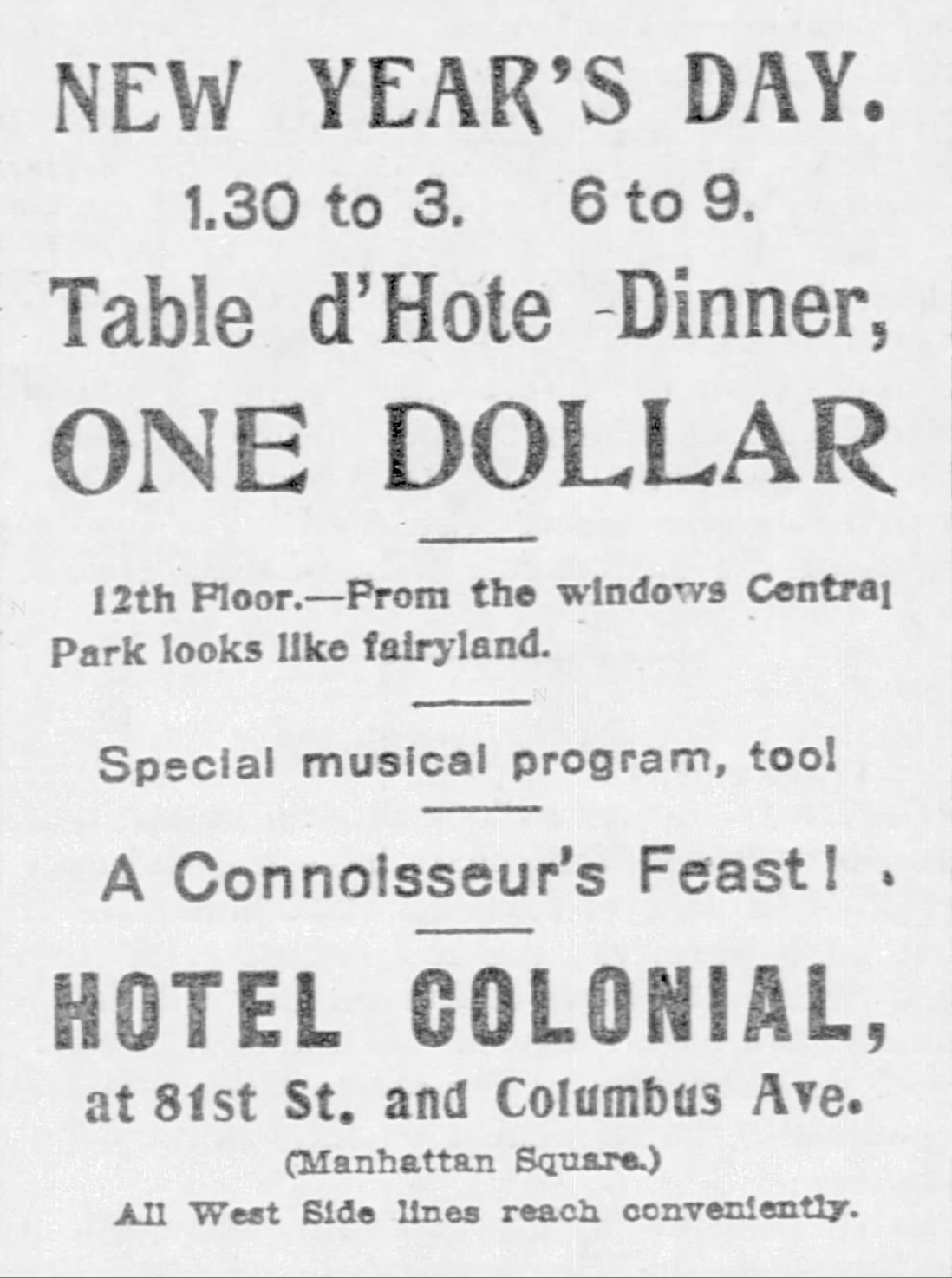 Frank Chance, first baseman for and manager of the New York Yankees (referred to in The Sun as the New York Americans), also called Hotel Colonial home. In fact, Chance’s departure from the team occurred at his residence when he handed his resignation to President Frank J. Farrell and was paid out the final $3,500 of his contract salary.[9]

The name of Hotel Colonial’s owner, David Lowenthal, is connected with a sadder chapter in Manhattan history. Lowenthal was in a car with his wife when his chauffeur, James J. Corbett, struck 8 year-old John McNeill on his way to class, killing him almost instantly.

The suicide of one former Hotel Colonial resident was cause for much front-page sensation in 1923. Marie Keith, a young immigrant from Paris, jumped into the ocean and drowned herself off the shores of Long Island after finding that the man she left France for, a Mr. H. Starr Giddings, had married another woman. In a page out of a Victorian romance, Keith reportedly shredded the love letters from Giddings and left them on the bulkhead from which she leapt, “believing the wind would scatter them and that they, too, would ultimately find their way to the ocean”. In response to her death, Giddings stated glibly, “She had threatened suicide so often during her stay in this country that I did not take her seriously.”[10]

One Monday night in 1954, 26-year-old Herbert Kaminski was arrested at Hotel Colonial for passing forged checks all over New York City. When he denied all charges, the arresting officers reminded him that, at the time of his capture, he boasted of recently paying a call girl with a worthless $50 check. Kaminski, surely realizing his error, was said to have replied wearily, “A gag […] just a gag.”[11]

Marie Keith, a young immigrant from Paris, jumped into the ocean and drowned herself off the shores of Long Island after finding that the man she left France for, a Mr. H. Starr Giddings, had married another woman.

The corner ground floor space of Hotel Colonial has been occupied by financial institutions many times since the structure’s grand opening, the first of which was, of course, Colonial Bank.[12] The space eventually became the Chemical Corn Exchange Bank which eventually was the site of one of the more heartbreaking incidents in the Hotel Colonial’s history. In 1956, 36-year-old mother, Elynore Rich, attempted to hold up the bank for $500. When asked why she did it, she stated that she needed the money to clothe her daughter, also named Elynore.  At her own request, she was promptly committed to Bellevue Hospital.[13]

Hotel Colonial has had many other ground-floor tenants over the years, but maybe none more notable than Charivari Workshop, a spinoff of cutting-edge fashion mecca Charivari, described in Vanity Fair as an “irrepressible mini fashion empire” founded by Selma Weiser, a child of Russian-Jewish immigrants. The Upper West Side chain proliferated quickly and successfully throughout the neighborhood, giving rise to many then-unknown names in fashion, including Japanese designer Yohji Yamamoto. Charivari Workshop was specifically opened to spotlight “avant-garde designers [the Weiser family were] becoming obsessed with”. The location’s interiors were created by High-Tech architect Alan Buchsbaum who designed all of Charivari’s locations until his death from AIDS-related complications in 1987.[14]