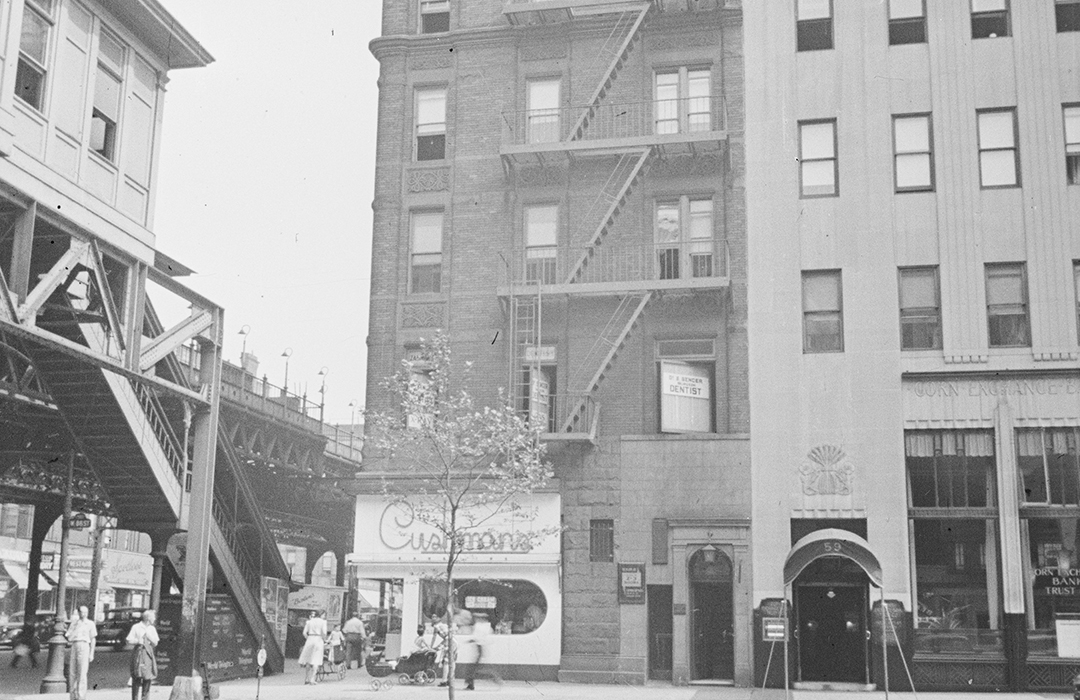 At a time when a frenzy of construction on the Upper West Side had developers keeping architects busy designing rows of townhouses, John G. Prague covered both bases. Like a handful of other architects financially able to do so, he often acted as his own developer. Such was the case in 1888 when he designed two mirror-image apartment buildings on the east side of Columbus Avenue, one facing 86th Street and the other 87th Street.

He named the southern building The Eliott; like its twin, The Carlyle, it was five stories high, faced in buff colored brick and trimmed in brownstone and terra cotta. Prague’s Romanesque Revival design featured bull-nosed brick which softly rounded the corners, medieval inspired panels, and rough-cut stone courses. Rather than top the building with a cornice, as might have been expected, he used a parapet that gave the structure the feel of a fortress.

The Columbus side held three stores.  The corner shop was home in the 1890’s to Charles Hartman’s furniture and decorating business.  Couples furnishing apartments or homes could select furniture, tapestries and other works of art here.  The center store held Arndt & Wiesner, grocers; and the northern space was the millinery shop of Emma J. Jarden through 1898.

The Columbus side held three stores.  The corner shop was home in the 1890’s to Charles Hartman’s furniture and decorating business.  The center store held Arndt & Wiesner, grocers; and the northern space was the millinery shop of Emma J. Jarden

That year one of the most notorious incidents in New York City criminal history took place in the third-floor apartment of Katherine J. Adams.  Known as Kate, the 62-year old widow shared the apartment with her daughter and son-in-law, Florence and Edward F. Rogers.  Boarding with the family was Harry Seymour Cornish, the athletic director of the Knickerbocker Athletic Club on 45th Street and Madison Avenue.  He was distantly related to Kate Rogers by marriage. 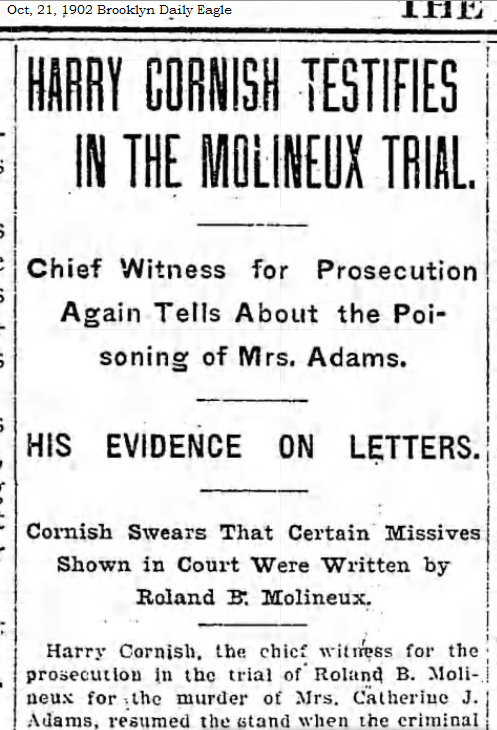 A well-to-do member of the Knickerbocker Athletic Club, Roland Burnham Molineux, became engaged in a feud with Harry Cornish that year.  Just before Christmas, Cornish received a gift at the club with a Tiffany envelope but no card.  It was later traced to Molineaux. Inside was a small silver case containing a bottle of Emerson’s Bromo-Seltzer that Molineux had mixed with cyanide.  Tragically, Cornish took the bottle home that night.  The following morning, December 28, Katherine Adams was suffering a headache.  Cornish mixed the bromo-seltzer with water and gave it to her.  She died shortly after the doctor arrived.

Inside was a small silver case containing a bottle of Emerson’s Bromo-Seltzer that Molineux had mixed with cyanide.  Tragically, Cornish took the bottle home that night.

Along the 86th Street side, a new arrival to America, Morris I. Malbroau, opened his butcher shop in the corner store around 1916.  For years following the turn of the century, the northern space facing Columbus Avenue was home to Sabatelli Brothers’ barber shop, owned by Italian immigrants Joseph G. and Mauro Sabatelli, the latter born in March 1867 to parents Angelo and Caroline. Mauro would live 78 years and his son, named for his grandfather Angelo, would also reside on the Upper West Side most of his life.

By the early 1980’s the corner space became the Three Star Coffee Shop, now closed.  While the ground floor storefronts of The Eliott apartments have undergone significant renovations over the decades, the upper floors are little changed since the first residents moved in in 1889.

Shop local to support the businesses currently at 541-547 Columbus Avenue: