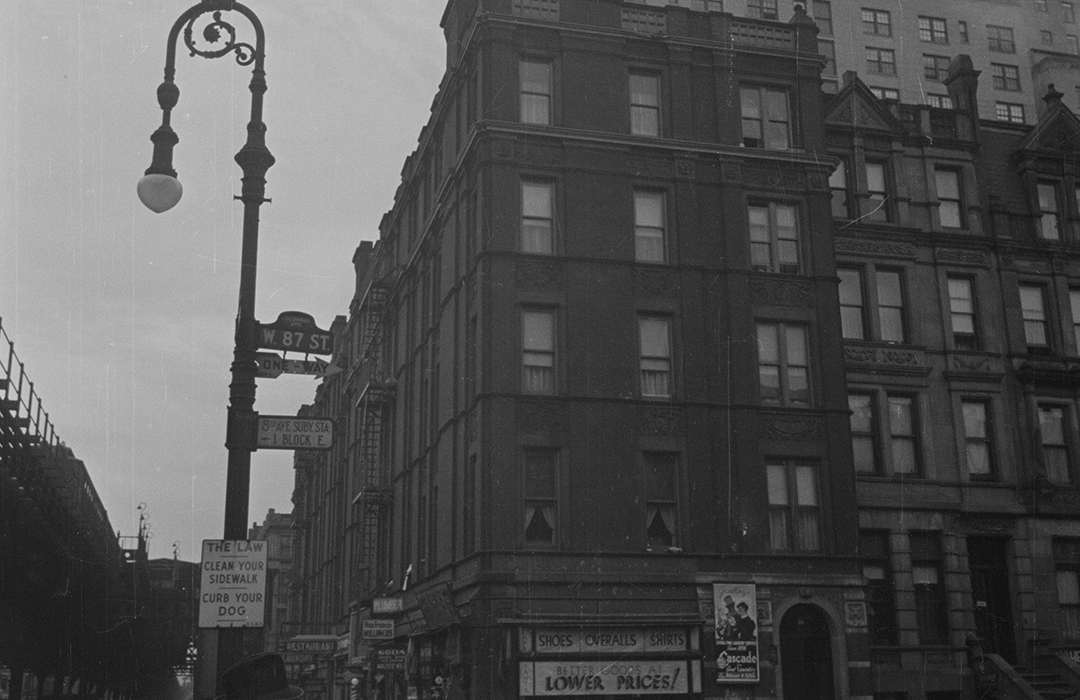 In April 1886, prolific architect and real estate developer John G. Prague purchased the western blockfront along Ninth Avenue (soon to be renamed Columbus Avenue) between 86th and 87th Street.  He designed two mirror-image apartment buildings on the site, one facing south (The Ormonde) and the other north–two identical twins having a spat.

The northern building, which was christened The Dudley, cost $981,000 in today’s money to construct.  Its residential entrance was at 100 West 87th Street.  The sidewalk level along the avenue was lined with stores.  There were just two apartments of seven or eight rooms per floor.  An advertisement in The Evening Post on September 17, 1887 warned potential residents that there were only “a few apartments remaining” and touted the building’s “steam heat, hall attendance, and every room direct light.”  (“Hall attendance” referred to the uniformed “hall boys” who were available to run errands, bring one’s mail, etc.)

The stores initially filled with tenants related to the building trade.  Gaylor & Rankin’s plumbing business took the space at 552, Metropolitan Artificial Stone Co. was in 554 and Clarence F. James ran his real estate office from 556.

Among the early residents of The Dudley were Thomas R. Manley and his wife, who were married in 1887.  Manley was a man of broad talents, an etcher and lithographer as well as an Impressionist painter.  He was living in The Dudley in 1891 when he exhibited a dozen etchings at the National Academy of Design.

Among the more distinguished residents was Philip V. R. Van Wyck.  Born in Nashville, Tennessee in 1835, he became an Assistant Collector within the Treasury Department in Washington D. C. about ten years before the outbreak of Civil War.

The Manleys moved to Montclair, New Jersey in 1893.  He would go on to be known as “The Dean of Montclair Artists” and one of the state’s foremost Impressionist artists.

The residents of The Dudley were affluent, if not wealthy.  They all had at least one servant and in September 1892 one of the two tenants of the top floor was looking for a maid.  The succinct advertisement read, “Wanted, a girl for general housework in a family of 3.”

At least one resident appeared in society columns for her fashion style.  On March 5, 1894, the New York Herald reported, “Mrs. C. Brodhead, who belongs to the young married set, is an exceedingly bright and popular society woman, and entertains delightfully with her mother at No. 100 West Eighty-seventh street.  Mrs. Broadhead wears very stylish gowns and her good taste in dress is well known among her friends.”

Among the more distinguished residents was Philip V. R. Van Wyck.  Born in Nashville, Tennessee in 1835, he became an Assistant Collector within the Treasury Department in Washington D. C. about ten years before the outbreak of Civil War.  In 1861 he came to New York City and was assistant to his cousin, Pierre C. Van Wyck, the Collector of Internal Revenue.  Highly knowledgeable in taxes, he founded the periodical The Internal Revenue Record in 1862.  He changed professional course in 1867 when he graduated from the Columbia Law School.  He was still practicing law when he died in his apartment here in 1901. 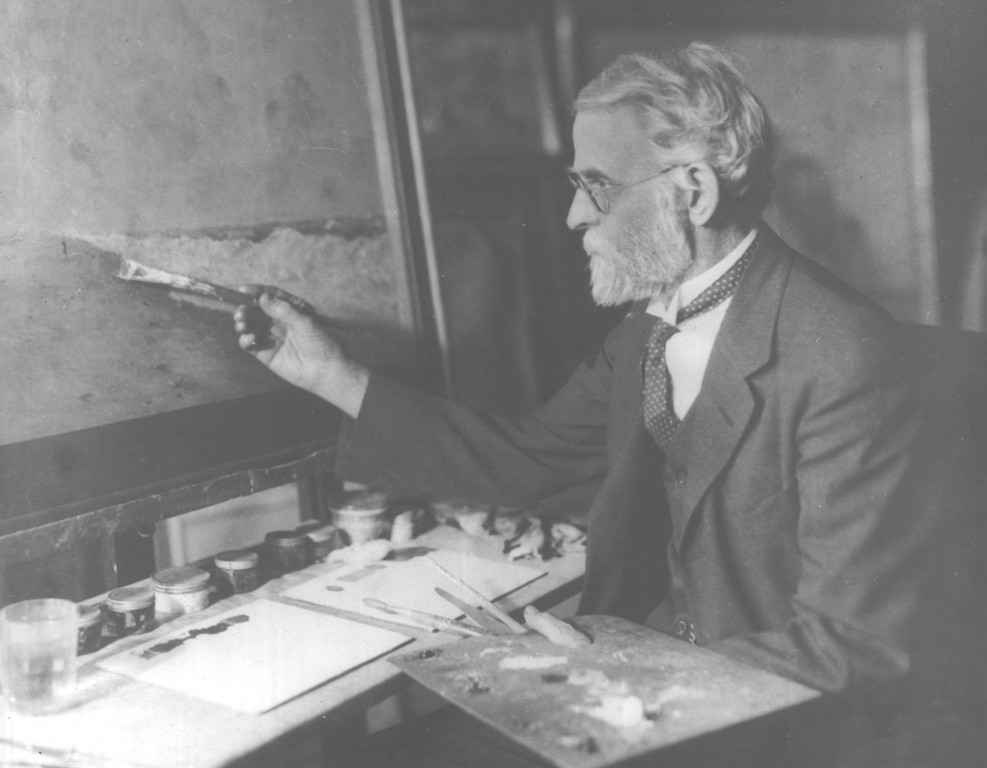 Robert Bliss lived in The Dudley at the same time.  Born in Connecticut in 1828, he ran a dry goods business in New York for more than a quarter of a century, was a vice president of the Bank of New York and one of the original directors in the Equitable Life Assurance Society.

Rents for the commodious apartments were not overly high, at least not by today’s standards.  The monthly fee for a seven-room apartment in 1908 ranged from $55 to $60 per month—or around $1,760 for the more expensive space in today’s money.

While tenants like the Bliss and Van Wyck families could trace their American roots backwards for generations; others had recently arrived in the United States.  The person who placed his “position wanted” ad in the New-York Tribune on June 23, 1912 made his ethnicity clear.  “Gardener—Scotch, single, 40; soon disengaged; thoroughly competent all branches of the business; strictly sober, honest; excellent references.”

Another relative newcomer was Prussian-born Sigmund A. Barthold.  He had the unfortunate luck to be at 40th Street and Broadway on March 1, 1912.  The horse pulling a cab two blocks north was spooked by an automobile and he galloped out of control down Broadway.  Inside the cab “two terrified women clung to each other in despair,” according to The Sun.  At 40th Street the horse took to the sidewalk, “knocking down Sigmund A. Barthold of No. 100 West Eighty-seventh street, whose left foot was crushed,” and throwing the cabbie to the ground.  Things could have gone much worse for Barthold.  The article continued, “Barthold, the only person injured by the runaway, was treated by an ambulance surgeon and went home.”

It was where well-dressed dogs could find winter outfits—a sweater or coat, for instance—as well as “paw wax,” a wax first used on Canadian dog sleds to protect their paws.

Following the end of World War I the immigrant presence in The Dudley seems to have increased.  In 1922 an advertisement in The New York Times read “Secretary—Frenchman, good family, desires position with gentleman or family, preferably as voyageur; speaks Russian, Turkish, Persian, Armenian, Georgian and all Slovak Languages.  A. Sacha, Karely.”

And another immigrant family had a spare room that year.  Their ad read: “A Spanish family wishes a gentleman to board; all improvements; $10 weekly.  Queralto.”

A renovation completed in 1980 resulted in five apartments per floor.   The change in the face of Columbus Avenue was reflected in the trendy shops that took over the storefronts.  In 1982 the combination restaurant and antiques store Welcome Home was in 556 Columbus Avenue.  By 1987 The Golden Treasury was in 550 Columbus Avenue, where, according to Born to Shop N.Y., shoppers could find an “eclectic blend of small period pieces, doorknobs, watches, faucets, neon, glassware, lamps, etc.”

Neil Rosenblum’s Pet Shop Ltd. Operated from 552 Columbus Avenue by 1994.  It was where well-dressed dogs could find winter outfits—a sweater or coat, for instance—as well as “paw wax,” a wax first used on Canadian dog sleds to protect their paws.

552 Columbus is still home to a pet store, now Manhattan Puppies & Kittens.   A dry cleaning establishment is in 550 Columbus, and the Columbus Café fills the double corner store.

Shop local to support the businesses currently at 548-556 Columbus Avenue: