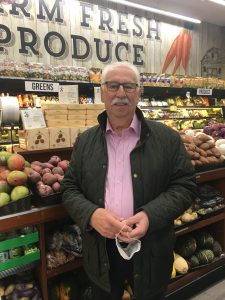 Pioneer Supermarket at 289 Columbus Avenue goes way back.  And, Steve Vasilikos, a long-time partner of Lenny Franzblau the original owner, has been managing the store for 53 of the businesses’ 70+ years.

Steve’s father immigrated to the US from Greece.  Settling in Connecticut, he owned three grocery stores.  He passed away when his son was ten, and never knew that Steve would one day go into the same business in Brooklyn’s Flushing Avenue neighborhood.

In 1973, while working at his Brooklyn supermarket, Steve met and became friendly with Lenny Franzblau. The older man was a Polish Jew, who had come to the city with nothing.  Lenny started with an egg delivery business.  By the time Steve met him, Lenny had moved into milk delivery with 50 trucks to his name.  He and his wife Karen also had also owned and managed Food Economizer, a small grocery on 91st and Broadway. He told Steve, then an ambitious 29-year- old, “if you don’t move from this store, you’ll never get ahead.  Sell your store and come into business with me.” Steve did just that.

The partners did well. At one point they were managing 11 stores between the Bronx and Manhattan. Eventually, they decided to concentrate their efforts on the Columbus Avenue store.  Steve now partners with the Franzblau estate.

Describing the early days of Pioneer, Steve says that initially, the store was only in what is now the meat department.  Then, as leases came available, Lenny acquired them. After he leased the space that had been occupied by a  bar on the southwest corner of Columbus and 74th Street, he had the whole package. Eventually, he owned the entire building.

Steve says Lenny was a man of his times and not big on innovation. However, he did not argue with Lenny’s priorities.  For example, for all the time until Lenny passed away seven years ago at the age of 91, Steve respected his position that the store be closed on Sundays.  Steve explains that Lenny always lived in the neighborhood and for many years on 72nd Street off Central Park West.  He knew that if the store was open on Sundays, he would have to come in.  He wanted a day off.  “Lenny was a very good person who extended credit to those pressed for money after 9-11 and during SuperStorm Sandy,” recalls Steve.  After Lenny died, Steve stuck with an agreement they had made to leave the supermarket closed on Sunday for a year or two years and then to have the store open seven days a week, something customers wanted.

Pioneer is distinctive in a number of ways.  It has long been notable for employing a large number of cashiers who come from Senegal, Ivory Coast and other parts of Africa and from the Dominican Republic.  Steve said when he was growing up the staff would be college kids working to make a few extra bucks.  Today for his employees “it’s a living.”  Some employees have been with the store for 30 years or more.

Pioneer has gained a name as the go-to place for an incomparable selection of beer.  A former manager, Tony Sherri is responsible for developing this specialty at a time where mostly Budweiser and Miller were the available options at other stores.  The huge range of beer remains today.  “We have 500 kinds of beer.”  Steve explains, “West Siders travel.  When they came back asking if we carried Mythos.  We went out to order it.”

While maintaining a comfortable, settled-in environment, the supermarket has also evolved into the ultimate neighborhood grocery with many higher end items along with the basics.  It has adapted to meet the preferences among neighborhood shoppers and a young crowd that cares a lot about health and diet.  “We sell gluten-free and the largest sector is vegan foods, sold to our younger customers.”

And speaking about the younger generation, are members of his family going into the grocery business?  “No,” says Steve. “You send them to school and they want five day rather than seven day-a week jobs.  You want that for them too.”  Steve’s son is music director at the University of Pennsylvania and his daughter works in the media department at Pratt.

For himself, Steve continues to enthusiastically manage Pioneer. He says, “I like the interactions with customers and vendors.”