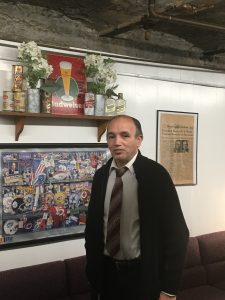 Alfred Gumbs came to New York City from St. Kitts about 40 years ago.  He was a musician, a drummer looking for work.  Looking back, he says, “Too few gigs to pay my rent. I sold my drums.” Alfred then followed a friend’s suggestion to look for a job at a supermarket. Over time, he found the occupation suited him and after working in a variety of supermarkets, became a manager at Gristedes at 504 Columbus Avenue.

Asked about his favorite part of the job, Alfred answers “stocking.”  He explains. “When you are looking for a can of corn and can’t find it, you get angry.”  Placing merchandise where customers can easily find it may be an unexpectedly rewarding part of good customer service.

Alfred always knew the large store had been a movie house but never gave it much thought until Covid hit NYC in 2020.  At this point, the Gristedes store underwent extensive renovations.  At the same time, outstanding service continued to be provided to customers and was written up in the NY Post.

As the scope of the renovation project was being assessed, Alfred and other employees were drawn into the exceptional enthusiasm their General Manager Luis Torres had for the project.  Luis is a passionate collector and history buff.  “My daughter said to me, ‘Dad you’re a bit of a hoarder,’ and I told her, ‘not a hoarder, a collector,’” Luis says.  With the renovations underway, Luis now had an intriguing opportunity to explore the structure of the former Schuyler movie theater and adjacent Schuyler Food Shop, a small supermarket that pre-dated Gristedes.  This archeological adventure became part of Luis’ job in his own workplace.  What lay beneath the surface of the floors and walls? What might he find? It turned out that what he discovered was pretty awesome.

Stripping the wall covering off the supermarket walls revealed the original brick, which now appears without plasterboard covering; Then also, a small room with terracotta floor tiling was exposed in back of the current freezers.  This Luis and others believe may once have been a small freezer in the Schulyer Food Shop.  Among Luis’ discoveries made after climbing into an opening in a side wall was the former projectionist’s booth and a long catwalk, presumably once used as a platform to support technicians servicing the theater’s lighting and sound equipment.

What else?  Under the floorboards in the back of the store, construction workers found a blast from the past: Schaefer and Rheingold beer cans and a Kentucky General Whisky bottle. “I took them and polished off the rust.”  The current location of these vintage finds presents a cinematic surprise.  Down in the back of Gristedes basement, which was constructed with unusual arched ceilings, and walls of mud and rock, behind a plain gray steel door, is Luis’ well-appointed office.  He has placed the vintage cans in an arrangement highlighted by bunches of flowers on a shelf.  Notable in the room is a large, fine, wooden conference table and chairs, a huge fish tank with tropical fish and a pristine 1928 Zenith radio.

Perhaps the most unusual part of the setting are the framed original newspaper pages – coverage of significant 20th Century events including JFK’s Assassination on Nov. 22, 1963, sinking of the Titanic, FDR’s death, and the July 22, 1934 shooting of gangster John Dillinger by the FBI.  There is also a poster honoring the tragedy of 9/11 and various sports memorabilia.  The origin of this collection is another tale of urban archeology.  Luis’s mother and father came to NYC from Puerto Rico, settling in the Bronx.  His father was in the supermarket business and his mother was the super of an apartment house in Washington Heights.  After one tenant, an elderly woman passed away, she was asked to clean the apartment out.  There along the walls were stacks and stacks of newspapers covering significant historic events.  Luis selected a number to frame and hang in his office.

Back up on the floor, the discovery of movie house remnants prompted a decision to incorporate reminders of the building’s past into the enhancement of the store. A large, 1939 photo of the former movie house and food shop is installed right where customers enter Gristedes.  This would also have been the entry to the movie theater, according to Luis.  Vintage photos of the building mark the numbered aisles of shelved groceries.  A huge theater-style marque surrounded in lights, whimsically announces the Deli department and red-velvet cordoned stanchions remind customers to distance while waiting for deli orders.

Alfred and Luis have worked together at this Gristedes for the past three years. Their interest in Columbus Avenue history has gone beyond the building where they work.  On a recent early afternoon, for example, the two men were briefly discussing Alfred’s question about the route of the 9th Avenue El.  The El would have passed the building prior to 1937 when the movie house opened, but likely would have been soon-to-close or closed in 1939/40 when the Schulyer theater photo was taken. The El and the 81st and 86th Street stations near the movie house were closed along with many others on June 11, 1940.