Working Toward the American Dream 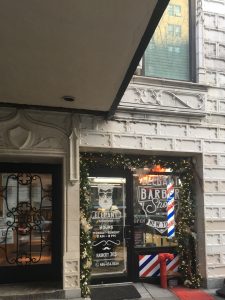 Elegant Barbershop opened at 118 West 72nd Street in December 2020.  “We’d been looking on the Upper West Side and especially on 72nd Street for a year but the rents were too high.  The pandemic was not a good time to open, but we got a deal on the rent and took a shot.  Now, we’re breaking even,” says Maksim Khon, owner of Elegant Barbershop.  Married with three children, this 34-year old immigrant from Uzbekistan is absolutely pursuing the American dream.

His daily commute is 1-1/2 hours each way to work and back to his home in Staten Island.  “Hard work, less sleep, no school, no vacations,” is the way he describes the commitments he hopes will advance his business success and allow him to retire early.  Today, his 65-year-old father is working beside him. “I don’t want to be working at 65 with my son working beside me.”

Maksim opened his first barbershop in 2013 in Brooklyn and added the others one by one.  So far, in addition to the 72nd Street shop, his Elegant Barbershops are located on East 61st Street in Manhattan; in Park Slope, Brooklyn; and another is on the way at Court Street, Brooklyn.

Maksim’s mother came to New York in 2000 to pave the way for her husband and sons to join her.  She worked as a cashier in a fruit store for $8 an hour, 12 hours a day, five days a week.  After four years, her family, none of whom spoke English, joined her in New York.  Maksim then went to work.  His younger brother was then 14.  Today he’s in automobile sales.  Maksim is a third generation barber, but the first in his family to be a business owner.

Maksim says he worked in a number of shops before opening his own.  He says the clean, casual elegance of his shops, “just came naturally.”  What are customers offered at Elegant Barbershop?  Maksim’s list includes: a cut; hot shave; nose waxing (almost no one does that); beard trim; a free shampoo before and after; and a free shot of whisky.  Plus, a loyalty program bonus – a free 11th cut!