Copy and paste the following text in an email and send it to LPC Chair Meenakshi Srinivasan at comments@lpc.nyc.gov, and please “cc” landmarkwest@landmarkwest.org 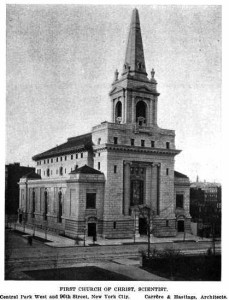 As citizens concerned about preserving our architectural legacy, including the First Church of Christ Scientist located at 361 Central Park West, we respectfully request for your office to follow its mandate to preserve the integrity of this architectural Landmark in its entirety, including its four facades, stained glass windows and roof profile as designed by the very prominent firm of Carrere and Hastings. Since its construction at the turn of the century, we have admired all the beautiful features of this dignified building and trust that under your direction, it will be preserved for many future generations to treasure and admire. The alterations presently proposed to this building counter the long term vision for NYC that your office has been entrusted with. As stated by Carrere and Hastings scholar Charles Warren, in his letter to you dated November 17, 2014: “The NYC LPC has a mandate to preserve the designated landmarks of our great city, this mandate does not require the commission to permit changes merely to maximize the profit of those who speculate in the real estate market. Allowing such destructive and unnecessary changes diminishes our architectural and cultural heritage and sets a precedent that undermines the protections the law extends to all of New York’s Landmarks.”