116 Years of History Comes Down to June 2nd

More than 100 New Yorkers held a candlelight vigil in front of the former First Church of Christ, Scientist at 96th Street and Central Park West to bring awareness to threats facing this Individual Landmark designed by Carrère and Hastings, the same architects who gave us the New York Public Library main branch.  On June 2, 2016, in a session beginning at 10:00am at 22 Reade Street (please mark your calendar and plan to attend!), the Board of Standards & Appeals is scheduled to vote on proposed zoning variances that would allow developers to pack 34 luxury condominiums – the equivalent of a residential high-rise – into the interior, with penthouses on the roof.  Original stained glass attributed to important 19th-century artists will be removed.  New windows will be carved into the facade, most extensively on the facade directly facing neighbors’ existing windows, less than 10 feet away in some cases.

You may ask, how is this possible?  How can a Landmark like this be at risk of such desecration by speculative development?  The fact is, such development is not possible, except through the exploitation of the so-called “hardship” process.  This developer claims that there is absolutely no way to make reasonable use of this building without a slew of exemptions from laws intended to protect our quality of life and rights as citizens. Not that this developer even tried to find a reasonable use.  Instead, he hired the City’s top grossing lobbyist and political donor—Capalino + Company—to influence City agencies and commissioners appointed by Mayor de Blasio—to get approvals, the nonexistent merits of the case be damned.  (Kate Wood, LW! President – click here for her full statement)

If there’s ever a case that cried out for our activism, it’s this one, here…I’m sick and tired of the worldview that says ‘we have to develop every single square foot of space in the city for luxury housing.’ We need as a city to have cultural institutions, and houses of worship and educational institutions, and community centers.  (Click here for CM Levine’s full statement)

Let me tell you something, I have been doing this for 20 years, I have never seen a variance as weak as this one is. It meets none of the legal requirements. That’s why they had to hire that lobbyist, because they can’t win it on the law. We have to win it by our power, by the political might of this community, by great leaders like Mark, like LANDMARK WEST!, Charles Warren. We have to stand together, and fight this. (click here for Attorney Michael Hiller’s full statement)

Gabriel Everett, a lifelong Upper West Sider and member of the congregation that worshiped in the Church until it was sold to developers in 2014 said:

This building saved my life…This in not just brick and mortar.

Scroll down for photos of the vigil, also check out the CPW Neighbor’s Association Facebook Page and more information about this issue on the LW! Watch-Blog. 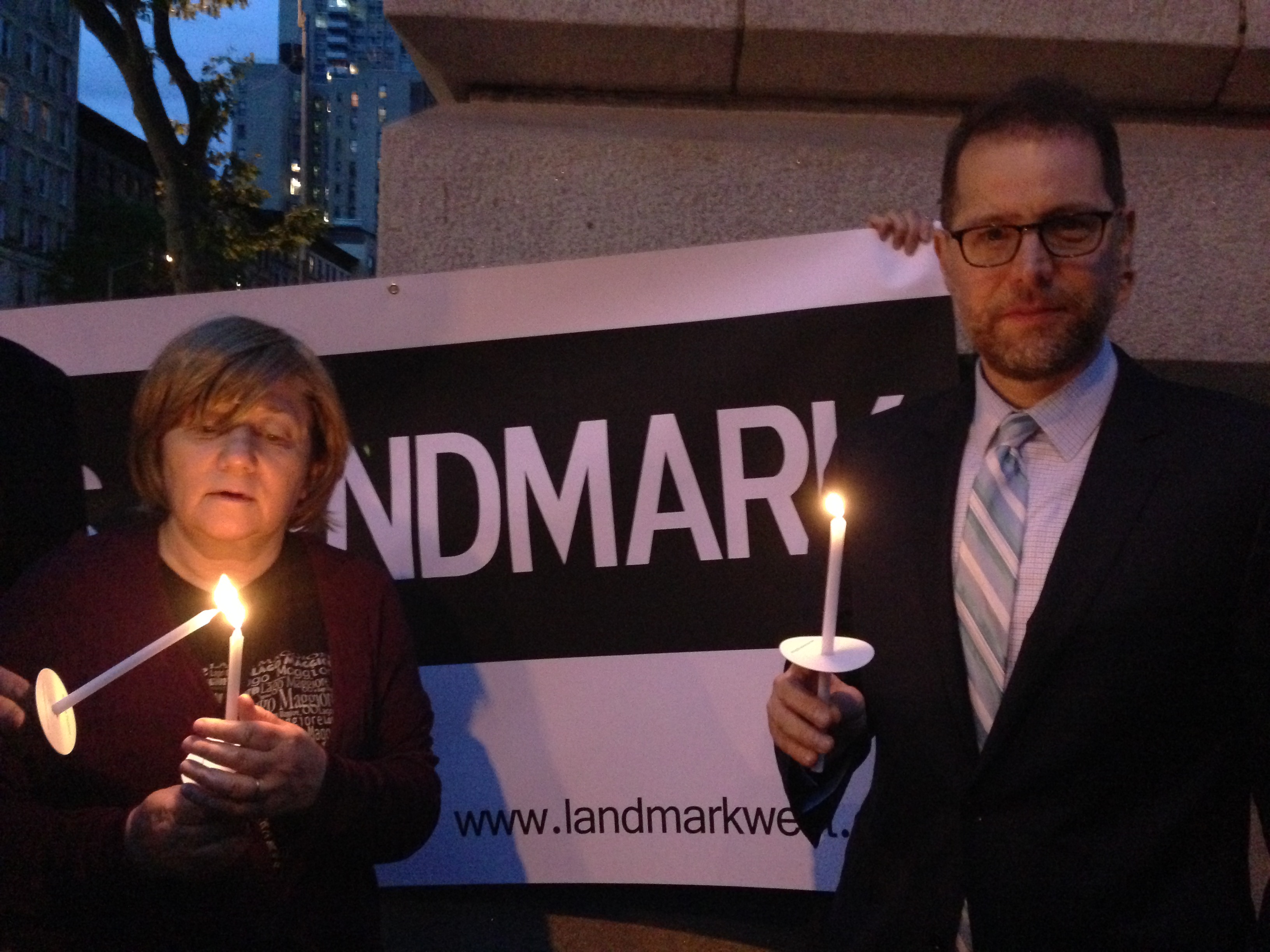 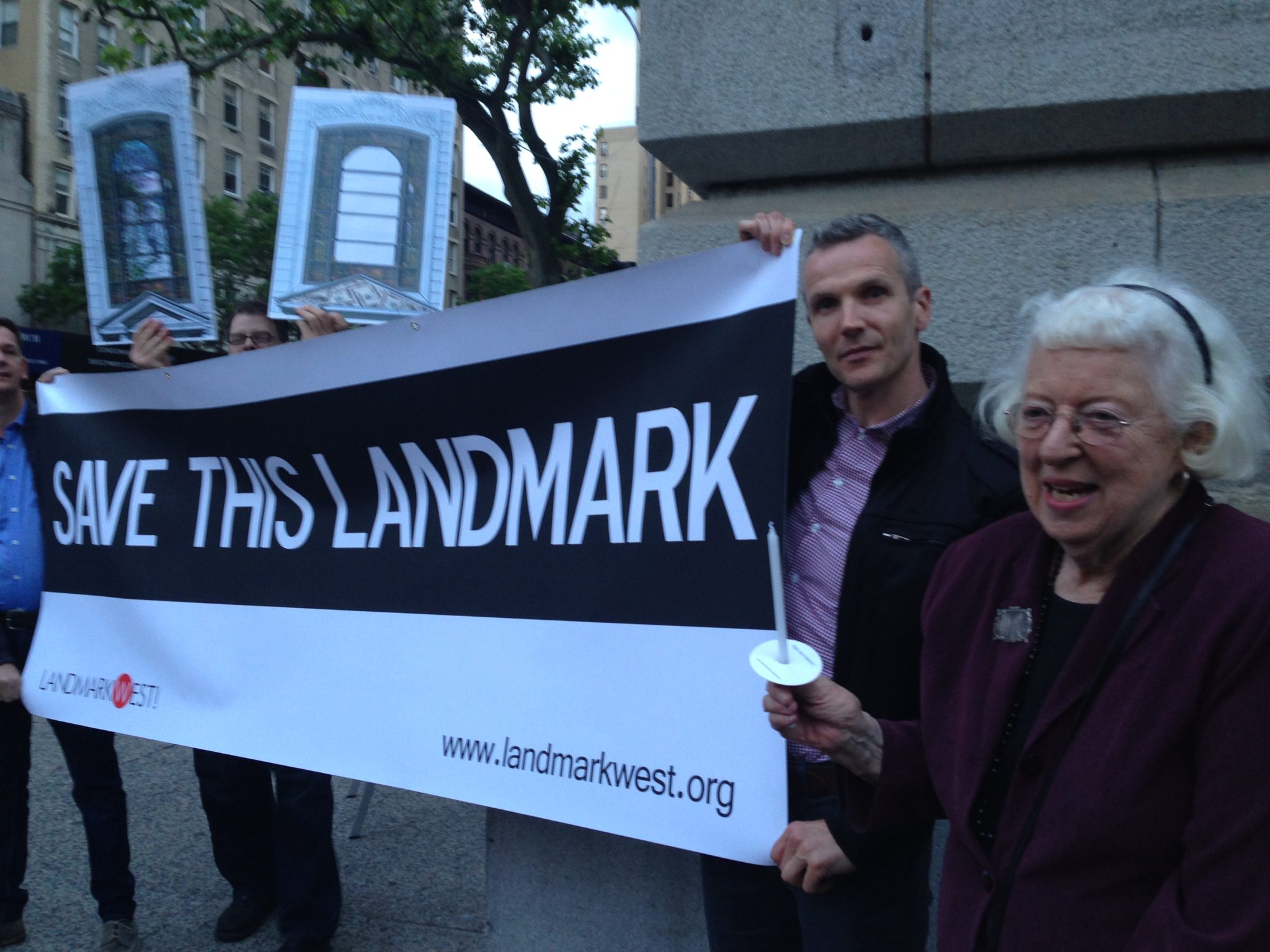 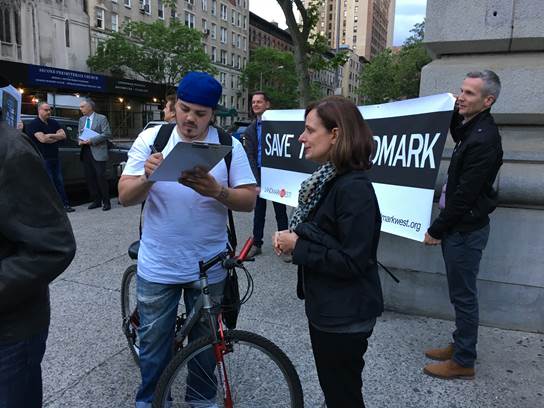 Neighbors sign a petition to save 361 Central Park West 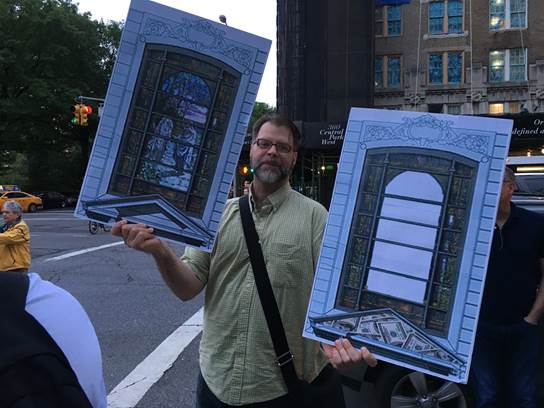 Dale vander Sande holds boards of the existing mission window (left) and a parody (right) with the “religious iconography” removed. 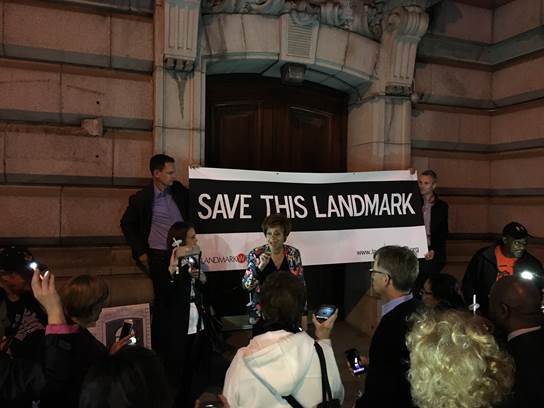 Former congregant Gabrielle Everett discusses what the individual landmark means to her. 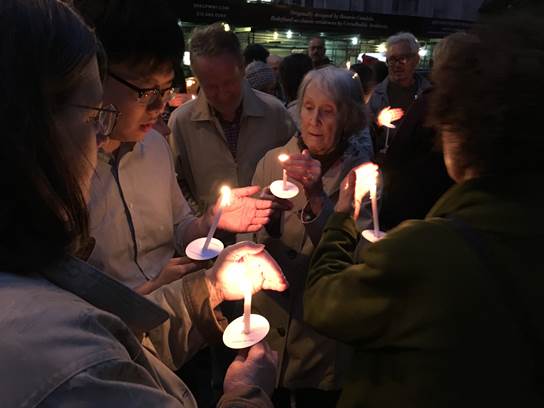 Manhattan Borough President Gale Brewer’s Land Use liaison to the Upper West Side Community Board 7 lights a candle in solidarity with neighbors for 361 Central Park West.