(Juilliard School of Music was the first building in Lincoln Center to be completed outside of the established superblock.) 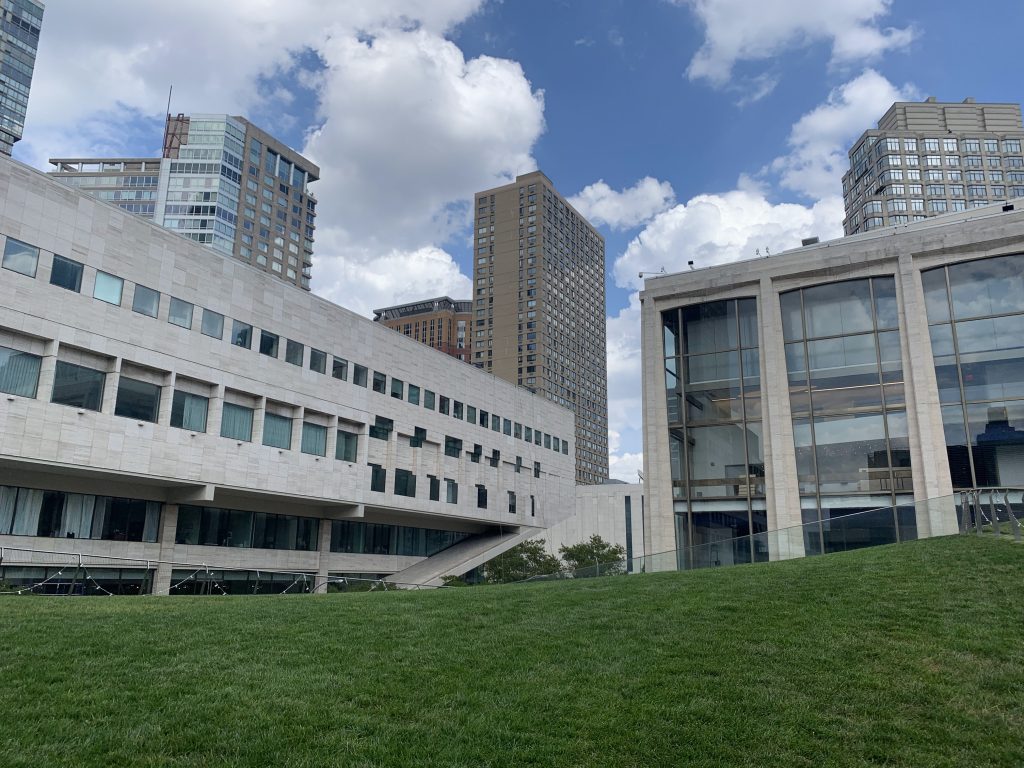 The occupation of the Juilliard School’s site by the High School of Commerce caused many unexpected delays in Juilliard’s design and construction. Planning for the school began in the mid-to-late 1950’s, at the same time as the rest of Lincoln Center.  However, due to delays with the New York City Department of Education, still in 1965, construction was running behind schedule for Martin Luther King, Jr. High School.  Ultimately, Lincoln Center and the NYC Department of Education agreed to demolish the existing high school in two phases.  This allowed Lincoln Center to begin developing half the site for the Juilliard School.  Juilliard’s full construction was completed in 1969, but over its twelve years of planning and construction, architects Pietro Belluschi produced approximately seventy different designs before he came to the building’s final evolution.

The Juilliard School’s tardy arrival to Lincoln Center for the Performing Arts was admissible however, as its location across Sixty-fifth Street from the other buildings did not delay or alter the greater orientation of the Lincoln Center complex around the central plaza.  Juilliard’s only link to the rest of Lincoln Center was an elevated footbridge over the dividing, eastbound street that connects north of Vivian Beaumont Theater.  Juilliard is clad in travertine marble, like its fellow Lincoln Center buildings, however the school was gifted their stone by the Italian government.  Having the luxury of not fronting on Lincoln Center Plaza and nearly ten years of clarity through studying the critical response, acclaim and disdain, the rest of Lincoln Center received, Belluschi developed a Brutalist design for the school.  This hard-lined and sparse design was more representative of its time.  Belluschi did not fall into the trap of ironic classicism like the other architects, making his design, comparatively, more original and less contrived.

This massive building occupies an asymmetrical site, due to its frontage on Broadway.  While the building’s site may be oddly shaped, the building was designed with a rectilinear plan, to complement its fellow Lincoln Center buildings and conform to the greater grid of the city.  Consequentially, the remaining frontage onto Broadway was transformed into a small, triangular plaza.  Within the plaza, a grand staircase rose to meet the building’s second-story terrace, which connected to the pedestrian bridge to the south.  This terrace was almost entirely cantilevered, covering the ground-level plaza and wrapping around the building.  At the top of the plaza stair, the building’s most monumental entrance was that of the second-story terrace, however, additional principle entrances fronted on Sixty-fifth and Sixty-sixth Streets.  The terrace level was defined by its window orientation with a row of double-height square windows in conjunction with higher, horizontal strips of smaller square windows.  Additionally, a massively scaled and kinetic sculpture, titled Three Times Three Interplay by Yaacov Agam, populated the southeast corner of the terrace. 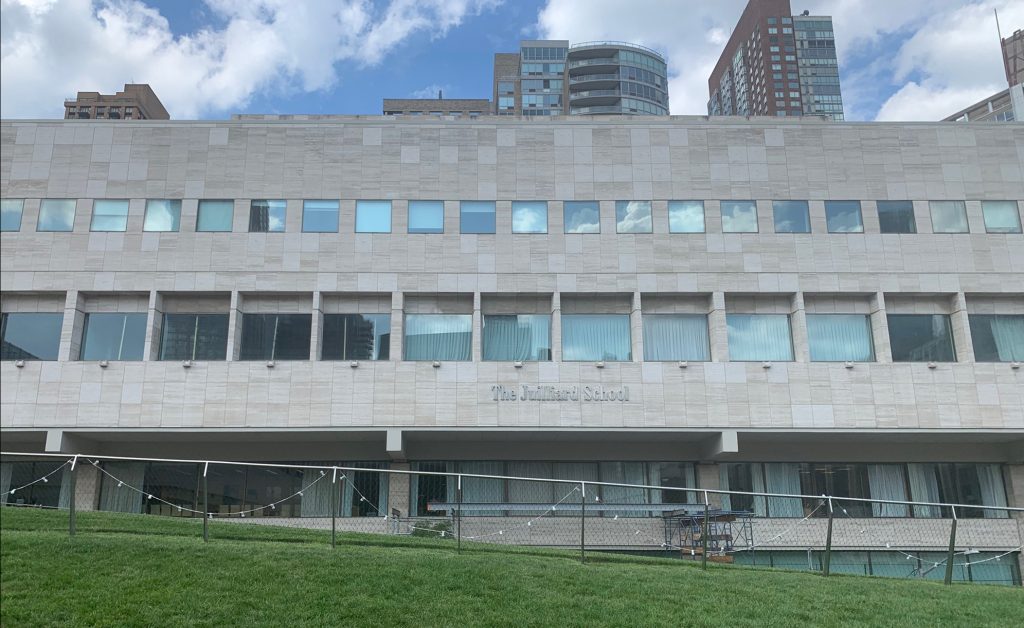 The sculpture’s 32-foot-tall composition of three intertwined aluminum tubes was impressive, however it has been removed from its place at Juilliard, assumingly during the building’s 2009 renovation, and its current state is uncertain.  To learn more about Lincoln Center public art, visit the Landmark West! Philharmonic Hall webpage.  In conjunction with the New York State Preservation League, Landmark West! has worked hard to make Richard Lippold’s Orpheus and Apollo, which used to hand in Philharmonic Hall, a Seven to Save designee for 2020-2021.

The original interior of Juilliard School was designed to provide separate spaces for the school’s drama division and the school’s world-renowned music program.  Additionally, a portion of the building also housed George Balanchine’s School of American ballet, a separate institution from Juilliard.  Both Juilliard and the School of American Ballet are still housed at the building in Lincoln Center, however, the building has adopted many changes over the decades to accommodate the evolving curriculum of these schools.  This original design required a skillful and impressive orientation of the academic and performance spaces, praised for inventively and effectively packing the facilities of an entire university into a single building.  The building contained three dedicated performance spaces; Juilliard Theater, Paul Recital Hall, and the largest, Alice Tully Hall.  Juilliard Theater, designed by theater designer Olaf Soöt, housed 1,026 seats in an oval space.  Paneled entirely in cherry wood and basswood, the theater also featured an adjustable ceiling, altering the acoustics to best accommodate opera, drama, and dance performances respectively.  Paul Recital Hall was designed for more intimate performances.  Seating a much smaller 277 audience members, the space was also clad in cherry wood.  Acoustically, its design was defined by curved ceiling coffers.  Notably, a Holtkamp pipe organ also occupied the space.

The most noteworthy of Juilliard School’s original interior performance spaces was its largest and most prominent, Alice Tully Hall.  As the school’s only public theater, the wood-paneled space seated 1,096 audience members.  While the space fronted on Broadway, Belluschi positioned the lobby entrance below grade, and behind Julliard’s exterior staircase, removing any sense of conceited grandeur from the Broadway entry.  The auditorium space for Alice Tully Hall was intended for recitals and chamber music performances, however, the first three rows of seats were designed to be removed, accommodating an expanded stage that afforded space for small orchestras.  Innovative sound insulation techniques were employed in the design of the space.  Being only twenty feet from the 1, 2, 3 subway tunnel running beneath Broadway, necessitated the insertion of an inch of cork-lined asbestos insulation between the building’s foundation and the bedrock beneath Alice Tully Hall.  Additionally, the theater’s walls were further separated and insulated from the building’s structural columns.  Through its use, Alice Tully Hall proved to be an inviting auditorium that was built-well to its purpose.

The entirety of Juilliard was critically praised by experts and the public for years to come.  By comparison to its Lincoln Center neighbors, Belluschi’s Brutalist design brought a fresh sense of modernism to the arts complex, something the other architects were unable to achieve, failing in their attempts to fuse their modernist ideals with past tradition.  The Juilliard School was praised as a fantastic place for learning and performance, achieved with contemporary elegance, something the future of the arts deserved.

Completed in 2009 by the architectural firm of Diller Scofidio + Renfro (DS+R), the Juilliard School underwent a 100,000-square-foot renovation and expansion project starting in 2003. Despite the beauty and practical nature of Pietro Belluschi’s original design, the school’s programming and curriculum had simply outgrown the existing space.  It was the goal of DS+R to further progress the growth of Julliard while continuing to respect, retain, and remember Belluschi’s original intent in this historic example of American Brutalism.  The building’s entrance lobby was renovated, and a box office was added.  Additionally, a black box theater, orchestral rehearsal and recording space, jazz studios, dance rehearsal studios, library expansion and music manuscript archive, administrative offices, classrooms, and lounges were added.  However, the most significant alteration and introduction was to Belluschi’s second-story terrace level.  To accommodate more classroom space, the terrace was consumed by the interior of the building.  This 45,000-square-foot addition brought the façade to Broadway and cantilevered the building over Belluschi’s triangular entry plaza.  Additionally, Alice Tully Hall was expanded below, partially filling the triangular plaza.  The eastern façade was altered to showcase student activities and the Julliard curriculum.  A new lobby space, stair, and suspended dance studio can be viewed through punched glass openings in the building’s travertine walls.  While it was the intention of DS+R to update the facilities while paying homage to the building’s original design, little is now recognizable of Belluschi’s original Juilliard School.  As an active and growing institution, Julliard needed the upgrade.  Additionally, New York longed for the upgrade, as sentiments surrounding the building’s interaction with the local streetscape have changed since the school’s completion in the 1960’s.  Today, a building stands that fits the needs of Juilliard and engages the city, sadly this came at the expense of this historic building.