Learn about Italian immigrant Costantino Nivola and his landscaped playground at Stephen Wise Towers between West 90th and West 91st Streets, including how you too can create his famous concrete horses!

Take me to the Activities!ADVOCACY ALERT

Costantino Nivola was born in rural Italy in 1911, the fifth of ten children. His father worked as a mason, and after school Costantino, the young artist, worked as an assistant to his father and brothers. He studied art in Milan and worked as a graphic designer and artistic director in Paris, before being forced to flee Italy during World War II, arriving in New York in 1939.

In New York he was inspired by Le Corbusier who became his mentor, and his work turned to mixing art, architecture, the environment and everyday life. At his home in Long Island he developed his simple but effective sculpting technique of sand-casting. He shaped wet sand molds, then poured plaster over it, and allowed the plaster to set.

This technique developed Nivola a reputation as a “sculptor for architects” and he soon began casting concrete, a material he considered modern, practical and architectural. While he sand-cast enormous sculptures for the likes of Olivetti and Yale, many of his works through the 1950s and 60s were designed to create a sense of community and were for places where art and architecture could come together, such as playgrounds and schools.

Nivola continued his drawing, sculpting and ceramic work through the 1970s and 80s, until his death in 1988.

credit: Nivola in New York ‘Figure In Field’, The Irwin S. Chanin School of Architecture, 2020, and photos taken by The Cooper Union for the Advancement of Science and Art.

credit: Nivola in New York ‘Figure In Field’, The Irwin S. Chanin School of Architecture, 2020, and photos taken by The Cooper Union for the Advancement of Science and Art.

Stephen Wise Towers were built in 1965 for the New York City Housing Authority (NYCHA). The Towers are twin 19-storey apartment houses on the block bounded by Columbus and Amsterdam Avenues and West 90th and West 91st Streets.

The towers are named for the late widely known New York City rabbi who founded the Free Synagogue at 30 West 68th Street and was president of the American Jewish Congress. They are believed to be the only public housing named for a rabbi.

Among the features of Stephen Wise Towers are the sculptured figures by Costantino Nivola, which are placed in the plaza between the two buildings, and a graffito — a mural carved in damp concrete —on the wall. The art work was conceived as an attempt to lend some interest and distinction to the housing project. It was financed by a grant of $30,000 from the J. M. Kaplan Fund.

What was here before the Stephen Wise Towers?

Before the Stephen Wise Towers were built in 1965, the site was developed with tenements and brownstones, and these were often divided into smaller apartments and turned into rooming houses. Many of these buildings were constructed when the Upper West Side was first developing in the late 1800s and early 1900s.

During the 1950s, the City thought that buildings in the area were overcrowded and provided poor conditions for those that lived in them. They were often referred to as ‘slums’, though there is little evidence to support this. The City developed a plan called the West Side Urban Renewal Area. This plan proposed to demolish some buildings and renovate others in the area between West 87th Street and West 97th Street and from Central Park West to Amsterdam Avenue. This would allow the City to ‘renew’ the West Side.

These buildings were demolished in the early 1960s, and the families who lived in them were moved, often to other boroughs of the City. This was very difficult for the displaced families who were not all able to afford to move, and were separated from their neighborhood and community. It did not acknowledge the difficulty that people of color, large families, or people with limited English would have leaving a familiar neighborhood and finding new housing.

The Stephen Wise Towers was the area’s first redevelopment project, and the first to break from NYCHA’s typical superblock design. The street grid of West 90th and West 91st Streets were kept. NYCHA built more ‘human-scale’ housing in the renewal area, as well as renovating existing row houses and converting them for low income apartments. 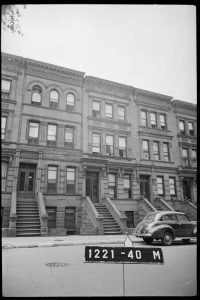 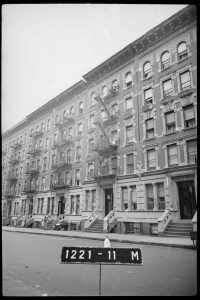 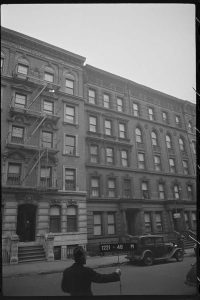 The plaza is the large public space between the two towers, and is a landscaped playground for the whole community. Nivola used murals and sculptures to create areas for play and relaxation that, together, form one carefully thought out plaza. 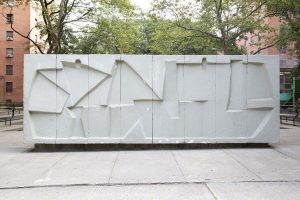 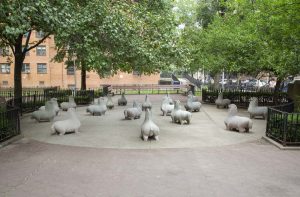 Concrete Horses – On the West 91st Street side, a group of 18 cast concrete horses, originally mixed with marble dust to sparkle in three colors – red, yellow and blue – gather to be played. When they were first built their legs were longer and they had proper noses. It is thought that their noses were cut off not long after they were installed. 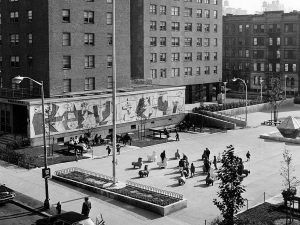 Sgraffito – A long sgraffito mural runs along the wall of 120 West 91st Street. 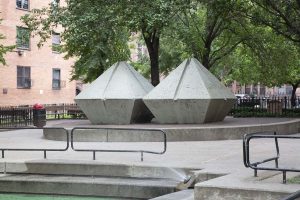 Fountain – In the center of the plaza, Nivola made two 8 foot tall diamond fountains, with water gurgling through gutters. He used colored sand, cast in layers, to enliven and emphasize the concrete surface of the fountain. It is not known whether the fountain has ever worked as planned. 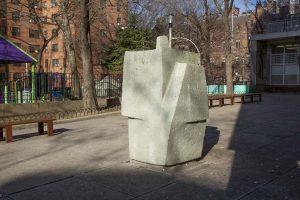 The Nanny – On the upper level near the entry to 117 West 90th Street, sits ‘The Nanny’, a 7 foot high abstract human figure watching over the plaza.

The plaza at Stephen Wise Towers was designed and built as one whole landscaped playground. In 1965 when the towers were built, artists and architects were changing the way playgrounds were designed. They wanted them to be more playful and be able to be enjoyed by everyone that visited, not just children. This type of playground is called a playscape.

Playscapes use as few man-made structures and equipment as possible. They might use plants, rolling hills, nature and trees to create different spaces to encourage play and interaction and to be as creative and imaginative as possible!

The plaza at Stephen Wise Towers is an excellent example of a playscape. Instead of the normal jungle gym equipment, NYCHA trusted Costantino Nivola to create a more inclusive space that could be used by many.

Did you know that:

Move your cursor over the horses (or click/tap) to see what colors they used to be. 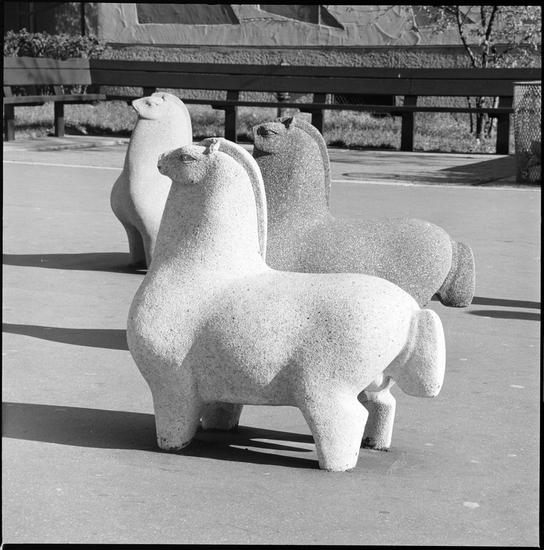 Make Your Own Nivola Horse

We have partnered with Mugi Pottery and art instructor Raquel Muslin to show you how to make your own horse sculpture!

If you already have one of our NIVOLA IN THE NAAYYBORHOOD activity kits, watch the video below for step-by-step instructions on how to make your own Nivola horse.

If you don’t have one of our NIVOLA IN THE NAAYYBORHOOD activity kits, these are the materials you need:

Email  us photos of your creations and we’ll share them here and in our Instagram feed.  If the email link doesn’t work for you, copy and paste landwarkwest@landmarkwest.org into an email message.

Want to see what’s in our Nivola in the Naayyborhood activity kits? Check out our unboxing video.

Instructions for Using the Kit

This Nivola horse and video instructions were proudly designed and made by Raquel Muslin, local artist, educator and designer. As an art educator she teaches her young students to use art to talk about the world, observe it with a visual eye and see the shapes, colors, and values that surround us.

If you already have one of our NIVOLA IN THE NAAYYBORHOOD activity kits, watch the video below for quick instructions on how to cut out and put together three more Nivola horses.

If you don’t have one of our NIVOLA IN THE NAAYYBORHOOD activity kits, print our templates created by artist Gerri Davis and follow the quick video instructions.

Look for your artwork in Landmark West’s Instagram feed 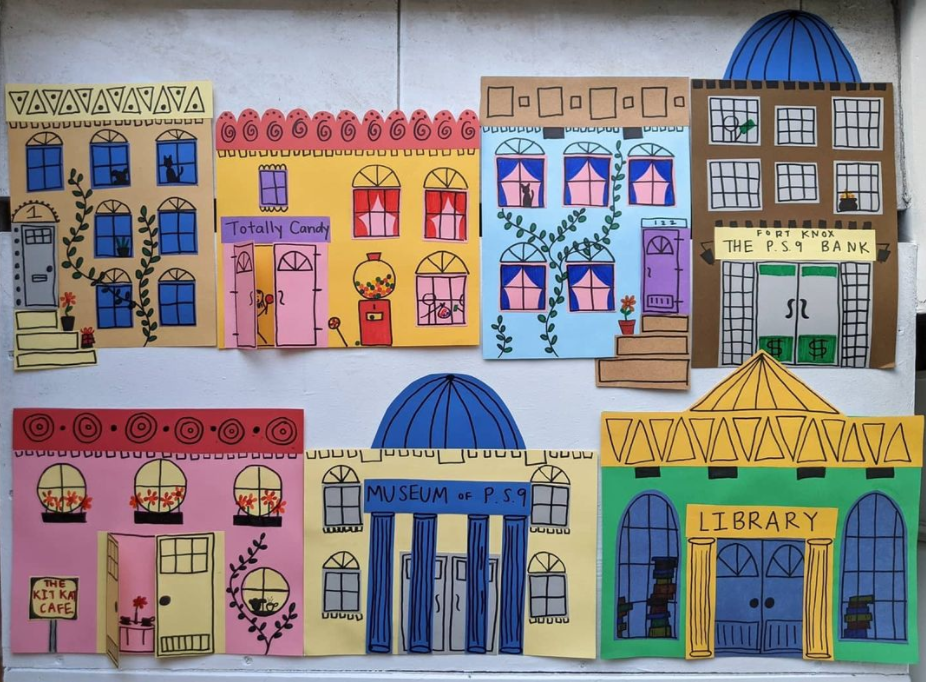 Submit your memories of the Playscape at Stephen Wise Houses with this form.   We’ll post them here.

How do they stay still?

When you go on the horse they move

When you hop off the horse it turns to stone again

Still as a stone with no sound

And you should sit on them like I’m doing right now!

​I see a volcano that shoots water

It has lots of weird and wild stuff

Further highlighting Nivola’s work across New York City, we were thrilled to co-sponsor The Cooper Union’s Guide to Local Works at their recent Nivola in New York Figure in the Field exhibition.

This project was accomplished in collaboration with Richard G. Stein, Architect.

New York is home to the largest gathering of Nivola’s public artworks — 22 pieces across all five boroughs, at least 17 of which still exist, with two on the Upper West Side.

NIVOLA IN THE NAAYYBORHOOD is a joint project by Landmark West for the Cultural Immigrant Initiative to highlight the work of Costantino Nivola on the Upper West Side. Many thanks to Council Member Ben Kallos for his generous funding. And thanks to Mugi Pottery for their participation. This program is supported in part by public funds from the New York City Department of Cultural Affairs in partnership with the City Council.