Orpheus and Apollo named one of Preservation League of NY State’s Seven to Save! Read Press Release

(Philharmonic Hall was the first building to be completed at Lincoln Center for the Performing Arts.) 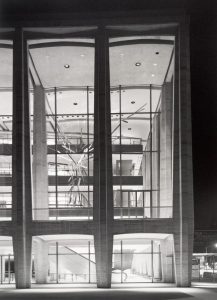 Richard Lippold’s ‘Orpheus and Apollo,’ dismantled and removed, may never be returned to its setting inside David Geffen Hall

“This important installation engages the Philharmonic in conversation about the performing arts through a visual arts dialog across the plaza with the Ballet and the Opera. Without it, the Philharmonic stands mute.”  -Page Cowley, Chair, LANDMARK WEST!

The hall’s architect, Max Abramovitz, commissioned Lippold to “create sculpture that would float in space and relate in a contemporary manner to the interior of the foyer just as the magnificent crystal chandeliers of a former day took command of their space.”

THE FIGHT FOR “ORPHEUS AND APOLLO” 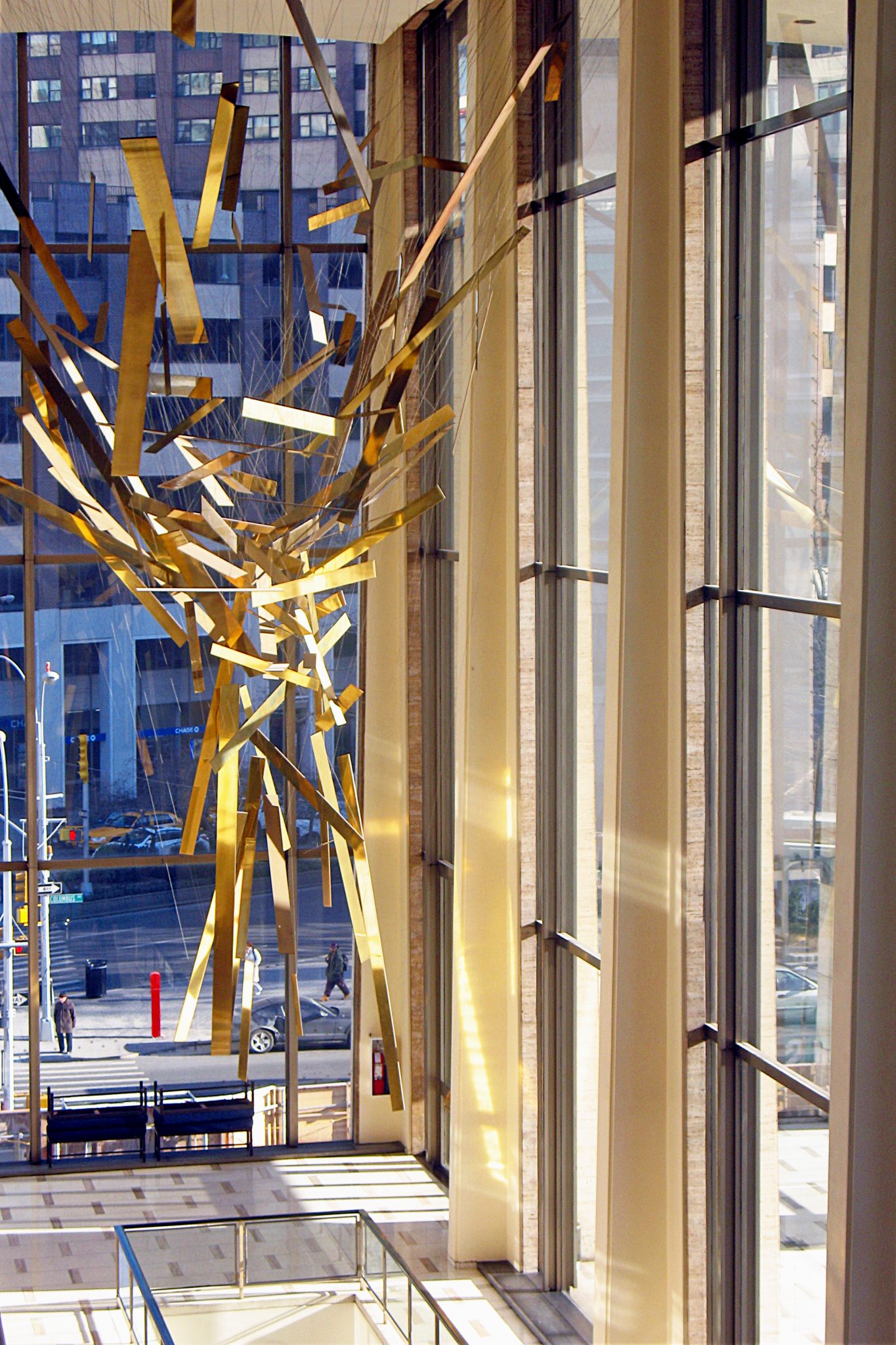 Current Status: “Orpheus and Apollo” was moved to storage in New Jersey in 2014.  The piece was 3-D scanned, deconstructed, and each of its Muntz bars individually packaged and wrapped. It awaits restoration.

From its conception, The Lincoln Center for the Performing Arts prioritized the inclusion of visual art.  Along with the acceptance of donated art, funding was set aside for the acquisition of and commissioning of public art.  The first major commissioned piece for Lincoln Center was for the home of the New York Philharmonic Orchestra, gifted by the Ittleson Family Foundation.  The architect of David Geffen Hall, originally Philharmonic Hall, Max Abramovitz, recommended Richard Lippold be commissioned to design public art that would accommodate his large foyer, or as he referred to it, Grand Promenade.  The architect and artist made a fantastic pair, designing space and sculpture that seamlessly complimented each other.  Lippold’s “Orpheus and Apollo” beautifully answered Abramovitz’s design criteria.  The architect, designing an austere and minimalist space, still longed for a sense of tradition in his Brutalist building.  To accomplish this, Abramovitz tasked Lippold to create sculpture that evoked the classically important element of chandeliers in the entryway.  The artist’s modern interpretation, through his pair of near-symmetrical hanging sculptures, was a success.  The aptly chosen theme of the sculpture represents Apollo, Greek god of the arts, giving his half-human son, Orpheus, the gift of music.  Made up of 190 individually hanging plates of highly polished Muntz, a copper alloy, the two large bodies seemed to reach toward each other in an embrace.  The large format of the work stretched the entire length of the space.  Drawing the eye upward with its massive scale, the piece emphasized the monumentality of the space and its symbiotic relationship with the art itself.  While Max Abramovitz’s Brutalist music hall was completed in September of 1962, Richard Lippold’s “Orpheus and Apollo” was not fully installed until December of the same year, completing the space and animating the home of the New York Philharmonic Orchestra. 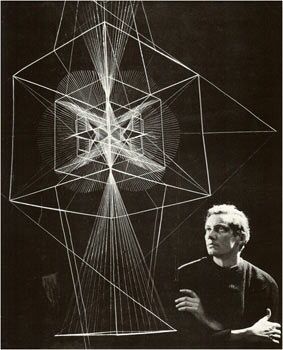 Richard Lippold, born in Milwaukee, Wisconsin in 1915, was an American sculptor, active from the early 1940’s through the late 1960’s.  Studying industrial design, piano, and dance with the Art Institute of Chicago and the University of Chicago, Lippold graduated in 1937 and began his career as an industrial designer.  Shortly tiring from this work, in 1941, he shifted focus and became an art teacher at the University of Michigan.  Inspired by his colleagues, who were other Constructivists, Lippold began sculpting with metal wire constructions.  This fascination led to a life-long affair with sculpture.  In 1944, Lippold and his family moved to New York, eventually settling in Lattingtown on Long Island.  He would live and work here for nearly the rest of his life.  From 1945 to 1947, Lippold taught at Goddard College in Vermont, but he returned to live on Long Island to begin teaching at Hunter College in Manhattan in 1952.  He would teach there until 1967.  Lippold’s work was often defined by its relationship to architecture, and therefore, his career was often defined by his relationship with architects.  Working closely with notable architects, such as Walter Gropius, and designing for famed public buildings and spaces, such as the National Air and Space Museum in Washington DC, Harvard University’s campus, and Philharmonic Hall at Lincoln Center for the Performing Arts, Lippold’s monumental, geometric, and dynamic sculptures compliment, and often complete, architectural spaces.  Lippold’s first solo show took place in 1947 at New York’s Willard Gallery.  However, he would continue to show his work throughout his career, notably in the 1952 “Fifteen Americans” exhibition at New York’s Museum of Modern Art (MoMA), and a retrospective on his career at Marquette University’s Haggerty Museum of Art in Milwaukee.  Lippold was happily married to Louise Greule, a dancer who passed away in 2004.  They had two daughters and a son together.  Richard Lippold died in Roslyn, New York in 2002 at the age of 87.

Removal of the Sculpture 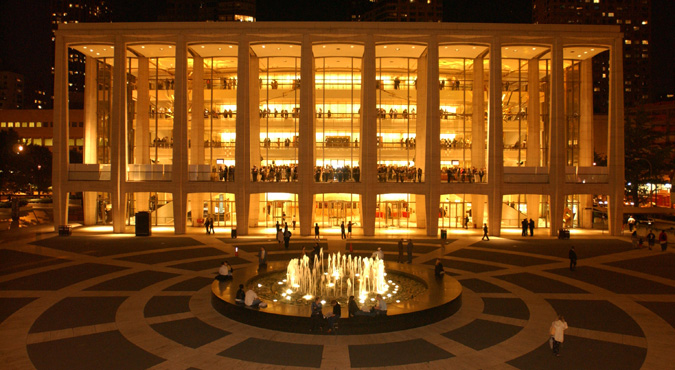 According to a New York Times article published in November of 2015, “Orpheus and Apollo” was removed for “restoration” in late 2014 and never returned. The piece is currently in storage in New Jersey. However, when outlining the upcoming significant renovations of the Philharmonic Hall interior in their project website, Lincoln Center has announced that they do not plan to reinstall the artwork.  Richard Lippold, the artist behind Orpheus and Apollo who passed away in 2002, stressed the important role architecture played in his customized public works.  Anything but the return of the iconic piece would be a disservice to the artwork and the architecture. With LANDMARK WEST’s input, the Preservation League of New York State has subsequently designated Lippold’s Orpheus and Apollo as one of the 2020-2021 Seven to Save sites throughout New York state.  Since 1999, the Preservation League has highlighted New York’s threatened historic sites through the Seven to Save list, which provides enhanced services from the League to bolster visibility and build support for preservation.  Read their press release highlighting Orpheus and Apollo among six other at-risk sites throughout the state.

Learn even more about Richard Lippold and the New York Philharmonic Hall from our colleagues at the NYC LGBT Historic Sites Project.

The exterior of Philharmonic Hall is a five-story building, constructed of glass and concrete clad in travertine marble. While the north, west, and east facades hardly activate the street below, the southern aspect’s frontage onto Lincoln Center Plaza is very engaging.  Travertine piers projecting from this façade highlight the building’s height and width, forming an arcade with nine elongated bays.  These rounded archways tower at seventy feet, accentuated by the tapered piers that define them and their largely glass backdrop.  A balcony protrudes low from the promenade level, hovering over the entry. 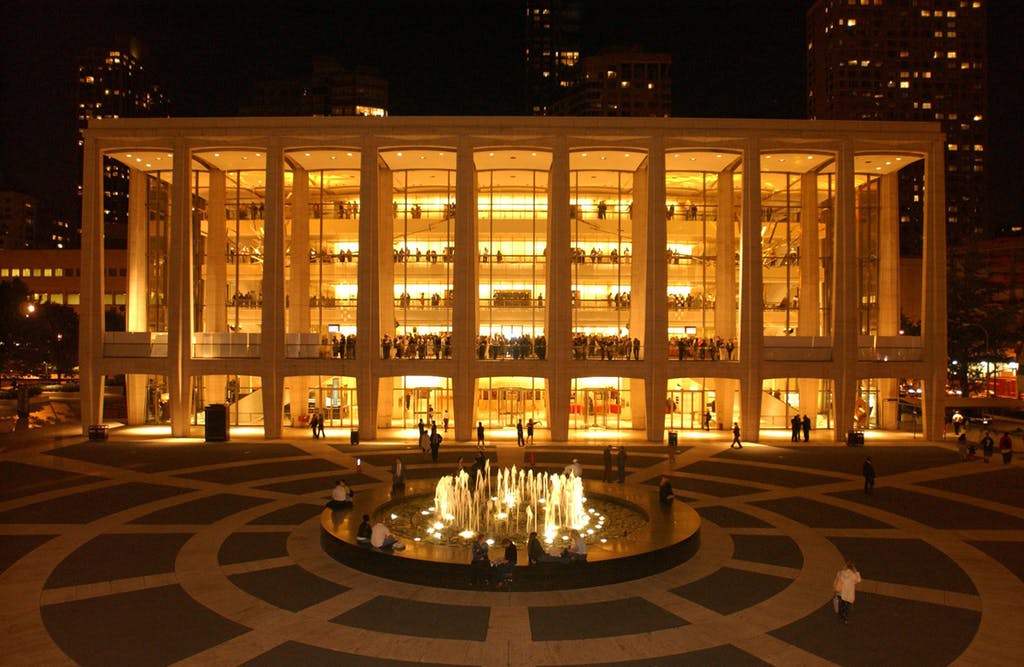 The interior public space is defined by the low-ceilinged foyer, containing restaurants and ticketing booths, and the high-ceilinged Grand Promenade on the second floor.  Accessed by a pair of escalators, this fifty-foot-high space functions as the main public space of Philharmonic Hall.  The Grand Promenade encompasses three balconies, leading to the music hall’s seating, which afford expansive views across the plaza.  These balconies wrap around the auditorium on the west and east sides terminating in floor-to-ceiling mirrors on the north walls.  Hanging from the ceiling above the escalators, Richard Lippold’s Orpheus and Apollo is an allegorical representation for the gift of music.  This suspended sculpture of Muntz metal bars on gold thread depicts two figures reaching toward one another, bringing the space to life.  However, architectural critic Ada Louise Huxtable felt that the space was best animated through its inhabitance, stating, “such a building… unlike other buildings of a less special social and performance character, can be evaluated only when it is alive and in action.”  Philharmonic Hall’s lively crowds are “the building’s lifeblood.” 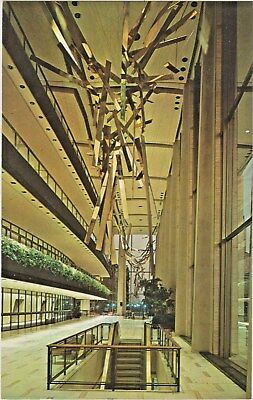 The auditorium itself was designed in the pursuit of acoustic excellence.  Five years of experimentation and testing ultimately decided the shape and volume of the space, as well as the placement, size, number, and materiality of its interior features.  By the time this thorough process was completed, Max Abramovitz designed the space himself.  The concert hall’s composition was nontraditional, as a portion of the seating was placed behind the orchestra.  In this way, the design was bottle shaped.  Its walls were plastered and painted blue, contrasting the 2,162 gold upholstered seats.  Geometric acoustic “clouds” adorned the ceiling.  While this design was considered with great detail, its experimental nature ironically gave the concert hall a poor acoustic quality.  The hall underwent renovations in 1963 and 1972.  The auditorium in Philharmonic Hall, now renamed David Geffen hall thanks to a $550 million donation from business magnate David Geffen, is scheduled for yet another renovation designed by Diamond Schmitt and Tod Williams Billie Tsien Architects. 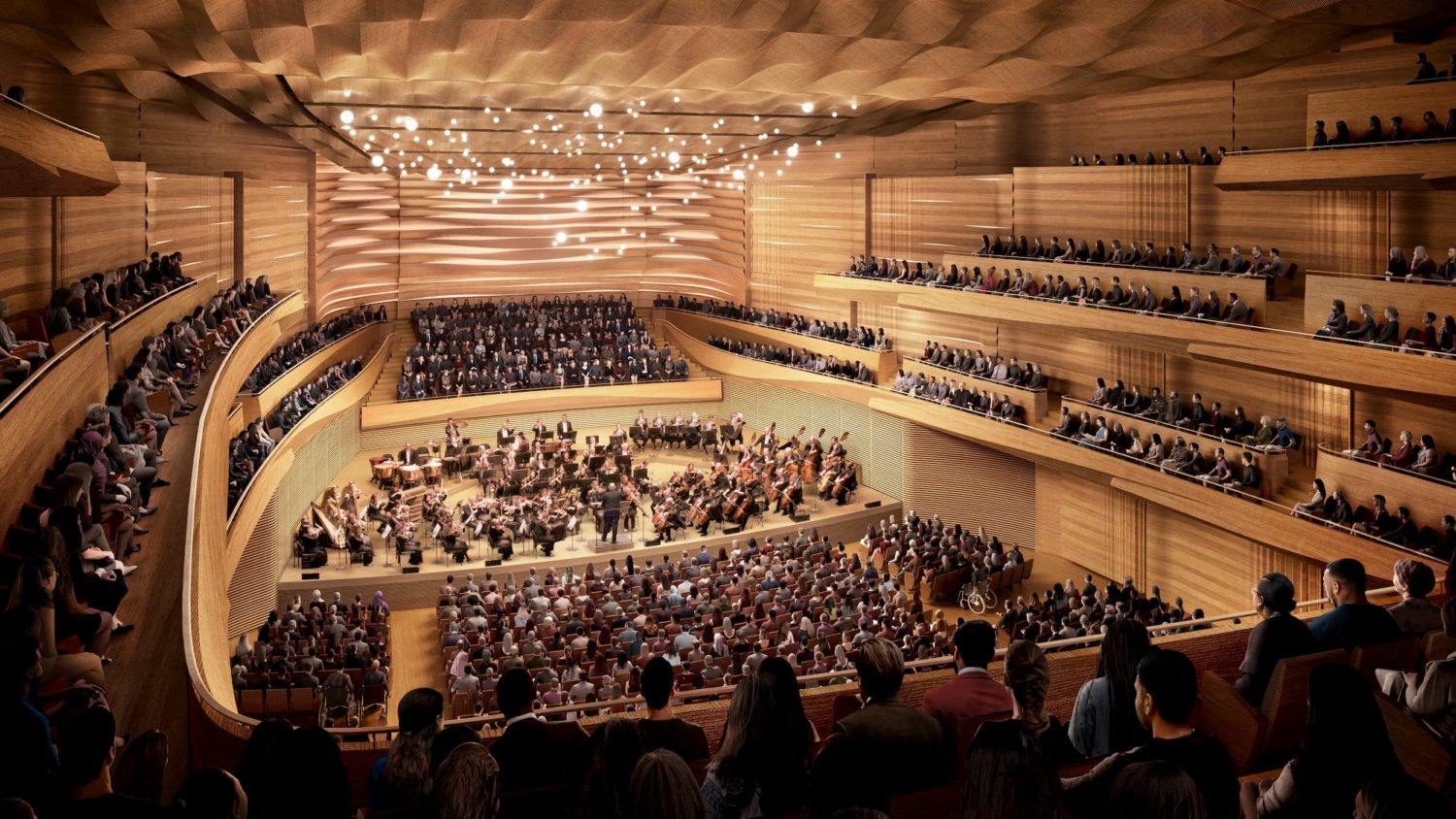 The newly renamed David Geffen Hall, housing the performing space for the New York Philharmonic at Lincoln Center for the Performing Arts, is undergoing intensive renovations that will improve the acoustics of the music hall and better connect the building to the urban fabric of greater New York City.  Landmark West! understands that the music hall, as an active work and performance space, may need to evolve to better perform, but Lincoln Center is a landmarks-eligible complex that is representative of a mid-century American cultural movement and an unprecedented collaboration of the nation’s modernist greats. Unfortunately, the upcoming redesign does not include the return of Richard Lippold’s Orpheus and Apollo to its historic place in the Hall. Follow this link to “Working in Concert”, the renovation project’s official webpage, for more information.