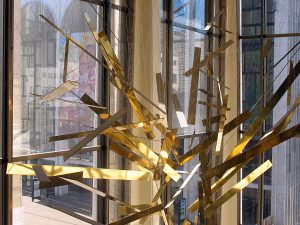 Lincoln Center for the Performing Arts’ Philharmonic Hall has felt empty since 2014, when Orpheus and Apollo, the shimmering and abstracted construction that has hung from the ceiling of the “grande promenade” since the hall was opened in 1962, was removed for “restoration” and never returned.  Lincoln Center is planning serious renovations of the Philharmonic Hall interior, which are outlined in their project website, however, they do not plan to reinstall the artwork.  Richard Lippold, the artist behind Orpheus and Apollo who passed away in 2002, stressed the important role architecture played in his customized public works.  Anything but the return of the iconic piece would be a disservice to the artwork and the architecture.

Albany, NY, 02/05/2020 — Since 1999, the Preservation League has highlighted New York’s threatened historic sites through the Seven to Save list, which provides enhanced services from the League to bolster visibility and build support for preservation. Through partnerships with groups and individuals, threats to dozens of at-risk buildings, landscapes, downtowns, and neighborhoods have been reduced, and in many cases, eliminated by the Preservation League’s listing and subsequent actions. Press conferences, tours, grants, and new legislation are among the strategies the Preservation League uses to secure the future of at-risk historic places. The League also collaborates with advocates, elected officials and other stakeholders to craft preservation strategies and put these plans to work.

“These Seven to Save selections bring attention to fascinating diverse aspects of The Empire State’s rich, eclectic built history,” said Preservation League Seven to Save Committee Chair Caroline Rob Zaleski. “Each threatened site represents a particular approach to engineering and architecture, as well as specific public purpose and sociology.”

“Our 2020-21 Seven to Save list helps tell the story of the many people who made our state unique,” said Preservation League President Jay DiLorenzo. “A sacred burial ground, a vulnerable lighthouse, a reimagined high school, a susceptible beachside enclave, an iconic canal system, a para-architectural installation, an imperiled research center; each site speaks to what makes our state special.”

The Preservation League announces two of our Seven to Save sites are in New York City:

Richard Lippold’s monumental Orpheus and Apollo hanging interior para-architectural installation was removed from Avery Fisher/David Geffen Hall in 2014. Initially, Lincoln Center claimed this was a temporary circumstance due to the safety of the public and the art, but Lippold’s work would return following forthcoming renovations.  Since that time, Lincoln Center announced sweeping changes to the Hall which currently do not include reinstallation. Orpheus and Apollo was the first major piece created specifically for Lincoln Center and a key commission for Richard Lippold, an internationally-renowned artist known for his site-specific work. Lincoln Center’s National Register Eligibility determination noted “the complex is … a collection of buildings, interiors, landscapes and art that is unparalleled as an experience of the variety of American postwar design in a single location.” Orpheus and Apollo remains in storage and could be repatriated with its’ architecture, as part of a renewed Avery Fisher/David Geffen Hall. This Seven to Save designation will call attention to the importance of Orpheus and Apollo as not only publicly accessible art, but also a key feature of the Philharmonic Hall itself.

“This important installation engages the Philharmonic in conversation about the performing arts through a visual arts dialog across the plaza with the Ballet and the Opera. Without it, the Philharmonic stands mute,” said Page Cowley, Chair, LANDMARK WEST! “Orpheus and Apollo is frozen music physicalized as high art.  Architecturally speaking, this construction serves as a pivot, drawing locals into the plaza from the neighborhoods of the Upper West Side.”

In 2011, construction workers in Elmhurst working in a vacant lot discovered the over 100-year-old grave of a woman in an iron coffin. Research revealed her identity and the existence of many unmarked graves of citizens of Newtown, a community of freed African Americans established in 1828. Development now threatens to erase this history altogether, and the Elmhurst History & Cemeteries Preservation Society is working with others to halt this. This Seven to Save designation will help promote Newtown’s forgotten history and bring attention to the many unmarked African American burial grounds throughout New York State, highlighting the conversation around these important parts of our history.

More information about these historic sites and the Seven to Save program can be found on our website: https://www.preservenys.org/seven-to-save

Interviews with leaders from the Preservation League, Landmark West!, and Elmhurst History and Cemeteries Preservation Society are available by request.

About the Preservation League of New York State

Since its founding in 1974, the Preservation League has built a reputation for action and effectiveness. Our goal has been to preserve our historic buildings, districts and landscapes and to build a better New York, one community at a time. The Preservation League of New York State invests in people and projects that champion the essential role of preservation in community revitalization, sustainable economic growth and the protection of our historic buildings and landscapes. We lead advocacy, economic development, and education programs across the state.

Furthermore, the Albany based WAMC Northeast Public Radio Station highlighted Richard Lippold’s Orpheus and Apollo and its fellow designees in a Seven to Save special broadcast with radio-host Jesse King.  A recording of the segment can be found, HERE!