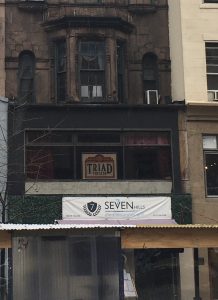 When Peter Martin bought the brownstone building at 158 West 72nd Street in 1995 it contained a theater.  His job some five years earlier had actually been as company manager for a musical revue called Forever Plaid, which played at the same theater.  The theater was built in 1984, and was originally called Palsson’s Supper Club, and later Steve McGraw’s. Peter has amassed a collection of photos of the building’s exterior and interior from the days before he owned it.

Peter lived in Tenafly, NJ, as a child and often visited with his grandparents in the city.  He went to the Calhoun School for 7th and 8th grade.  (Ben Stiller was in his class at Calhoun and Ben a few years ago hosted a benefit at Triad for an orphanage in Haiti.)

Years later, actually owning a building on the Upper West Side near where he went to school was a heady experience.  Peter opened the theater under the name Triad Theater in 1995.  In the last ten years, he transformed the 2-story space to evoke the ornate style of the movie palaces of the 1930’s and 40’s. He delved deep to capture the essence of that distinctive period and was thrilled when the builder of the newly constructed proscenium (the part of a theater stage in front of the curtain) incorporated columns salvaged from a renovation at the Chelsea Hotel. (Click for venue photos.) 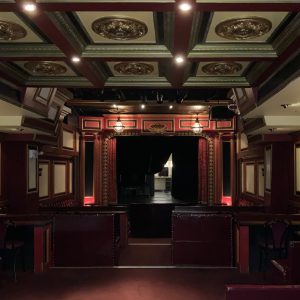 Early on, Martin managed the theater as a supper club.  Later, the first floor became a restaurant.  It was separate from the theater.  But an arrangement with the theater provided the availability of light foods like hummus and “delicious pizza.”  Seven Hills, a Mediterranean Restaurant now occupies the spot.  Apartments are on the upper two floors of the building above the theater.

Never an actor, but a theater lover Peter has always loved being a producer.  His producing partner Rick Newman, is known to those in the business as the founder of the New York City Comedy Club, “Catch a Rising Star.” as well as discovering and managing Pat Benatar.

The first show to open the Triad Theater was Loose Lips, which was produced by Peter and Martin Charnin (creator of Annie) and which starred Harry Shearer, Peter Boyle, Candy Clark and Bebe Neuwirth.  Their next show was Forbidden Broadway Strikes Back, which was one of many versions of the Forbidden Broadway franchise to play at the theater.  After that show closed Peter and his partners produced A Couple of Blaguards written by brothers Frank and Malachy McCourt and based on Frank’s Pulitzer Prize winning bestseller Angela’s Ashes.

Perhaps the most successful and longest running show at the Triad Theater has been Celebrity Autobiography which has featured an array of famous performers including Martin Short, Kristen Wiig, Ryan Reynolds, Paul Rudd and many others from the worlds of Film and TV.  The show’s concept is celebrities reading the autobiographies of other celebrities. The show has since gone on to perform on Broadway at the Marquis Theater along with tours of the US and Europe but still continues to play regularly at Triad.

In 2016, Triad and Peter were associate producers of Spamilton, a parody of the Broadway musical “Hamilton”.  Lin-Manuel Miranda became a big fan and came back many times with friends and family.

The possibility of filling the 120-seat theater with an appreciative audience came to a grinding halt with the pandemic in March of 2020.  In early May of 2021, the Triad has just reopened at one-third capacity and with a greatly reduced schedule.

Over the last year, the theater has been able to use its multiple cameras for some streaming productions including a Front and Center Production of Speakeasy with Lenny Kravitz and Sean Ono Lennon, and had been rented out on Sundays for Church services.  Peter expects it will take until the fall for theater going to return to being a robust reality.