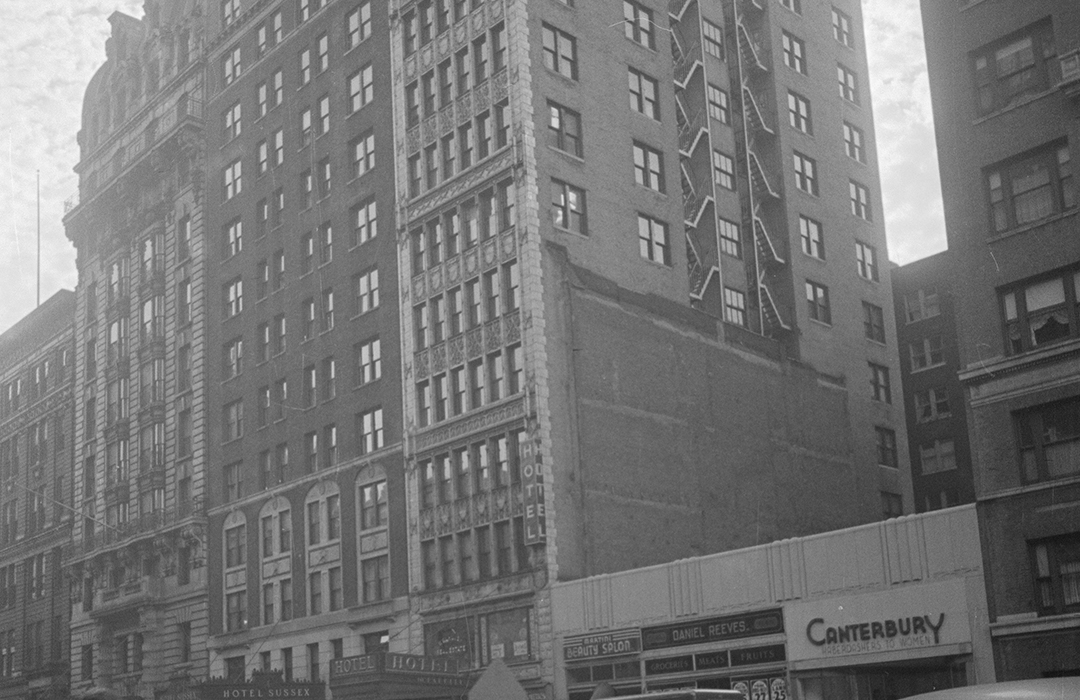 A year after erecting his striking 30-story World Tower building, in 1914 fledgling developer Edward West Browning hired the same architects to design three apartment buildings on the Upper West Side.  And as they had done with the World Tower project, Buchman & Fox turned to the neo-Gothic style for their design, clad in gleaming white terra cotta.

Browning had purchased three private residences as the sites (126 West 73rd Street and 42 & 118 West 72nd Street); providing the architects with the challenge of replacing a 25-foot wide house with a workable apartment structure.  At 118 West 72nd Street was the four-story brownstone clad rowhouse, which had been home to the Morris Loeb family for many years.  Browning paid Loeb $80,000 for the property in April 1914, a considerable $2 million today.

The initial outlay was, in part recouped by savings on the architectural fees.  Buchman & Fox designed the three buildings as nearly identical triplets, making possible the reuse of the terra cotta molds and greatly cutting back the costs.  (As a matter of fact, construction costs were $60,000 each, 25 percent less than the cost of the site of 118 West 72nd Street.)  When they were completed in 1915, only close inspection would reveal small differences in the trio of apartment buildings.  Elaborate Gothic-inspired decorations encrusted the buildings, which terminated in spiky parapets 13-floors above the sidewalk.

Browning called 118 The Hotel Earlton.  Like its siblings, it had four two-room apartments per floor, with “foyer, hall and bath, with parquet floors,” according to The Clay-Worker.  Known as an “apartment hotel,” there were no kitchens in the suites.  Tenants had the option of eating in a large dining room on the ground floor.

Despite the small size of the apartments, they filled with highly respectable tenants, like Ora Elmer Butterfield and his wife, the former Amy Iola Danklee.  A noted attorney, Butterfield was the general solicitor for the New York Central Railroad.

…her maid was more than happy to talk.  She told detectives that on Saturday Angela had received word that her husband intended to divorce her.  The New York Times explained “she was afraid her husband’s action would be successful and she wanted to die his wife.”

Another early tenant was Angela C. Kaufman.  She had relatively recently married Joseph Kaufman, an executive with the Ever-Ready Razor Company, but they were living apart.  On Saturday night, June 10, 1916, Angela fired a pistol into her breast with decidedly unsuccessful results.  The bullet barely broke the skin.

Angela’s physician, Junius W. Stephenson, was called and he picked up a patrolman named McKenna on the way to the scene. She was arrested for attempting suicide, but released the following Monday.  Stephenson pleaded that she suffered a nervous breakdown.

In the meantime, detectives were puzzled about her case.  Initially Policeman McKenna searched for the bullet, but could not find it.  When he examined the pistol he found it fully loaded, although obviously recently fired.  Closer inspection revealed that the spent shell had been reloaded into the chamber.

The New York Herald wrote “The mystery surrounding the shooting of Mrs. Joseph Kaufman in her apartment, at No. 118 West Seventy-second street…will not be solved until Mrs. Kaufman decides to discuss the case, a thing which she steadfastly refused to do yesterday.”  But her maid was more than happy to talk.  She told detectives that on Saturday Angela had received word that her husband intended to divorce her.  The New York Times explained “she was afraid her husband’s action would be successful and she wanted to die his wife.”

Angela was still in legal trouble.  On June 12 The New York Herald reported “As soon as Mrs. Kaufman’s condition will warrant she will be arraigned on the charge of violating the Sullivan law.” (The 1911 Sullivan Act prohibited ownership of unlicensed handguns.)

Joseph Kaufman was, incidentally, disappointed in his attempt to divorce his wife.  In court it came out that he had helped Angela divorce her first husband.  On July 5th, Justice Shearn said “After assisting the defendant to obtain her Nevada divorce decree and getting her to marry him the plaintiff now seeks to have the court declare that what he did was wrong and in bad faith.”  The judge refused to do so.

Angela Kaufman was not the only wife living apart from her husband here.  Baron Andrew V. de Patterson had married Beatrice Anita Baldwin on June 7, 1915.  The New-York Tribune described de Patterson as “a millionaire oil man” and the bride as “daughter of the late ‘Lucky’ Baldwin, California horseman, gambler and mine owner.”  The honeymoon was short-lived.

Baron de Patterson left her on September 28, 1916, accusing his wife of seeing another man.  The baroness moved into much reduced circumstances in the Hotel Earlton while her husband went to the Hotel Netherland.  Dirty laundry came out in court when he filed for divorce.  “They have had a tempestuous marital career,” commented the New-York Tribune on February 2, 1918.

Initially the Sinclair Oil executive gave Beatrice $25 per week to live on (just under $420 today).  But then the checks stopped.  So Beatrice attempted to earn a living as an actress.  The Tribune reported “Just now, she says, she is without support and destitute, and unable to live on the income she receives from her work on the stage.”

It apparently seemed to Beatrice that she was entitled to some of her husband’s wealth.  While he was gone from his rooms at the Hotel Netherland one day that spring, Beatrice obtained access.  She took home “Decorations give him by the King of Portugal, Jewelry, pictures and other property,” according to his complaint.  Beatrice provided the $1,000 bond (about $16,700 today) and appeared before the judge on April 22, 1918. 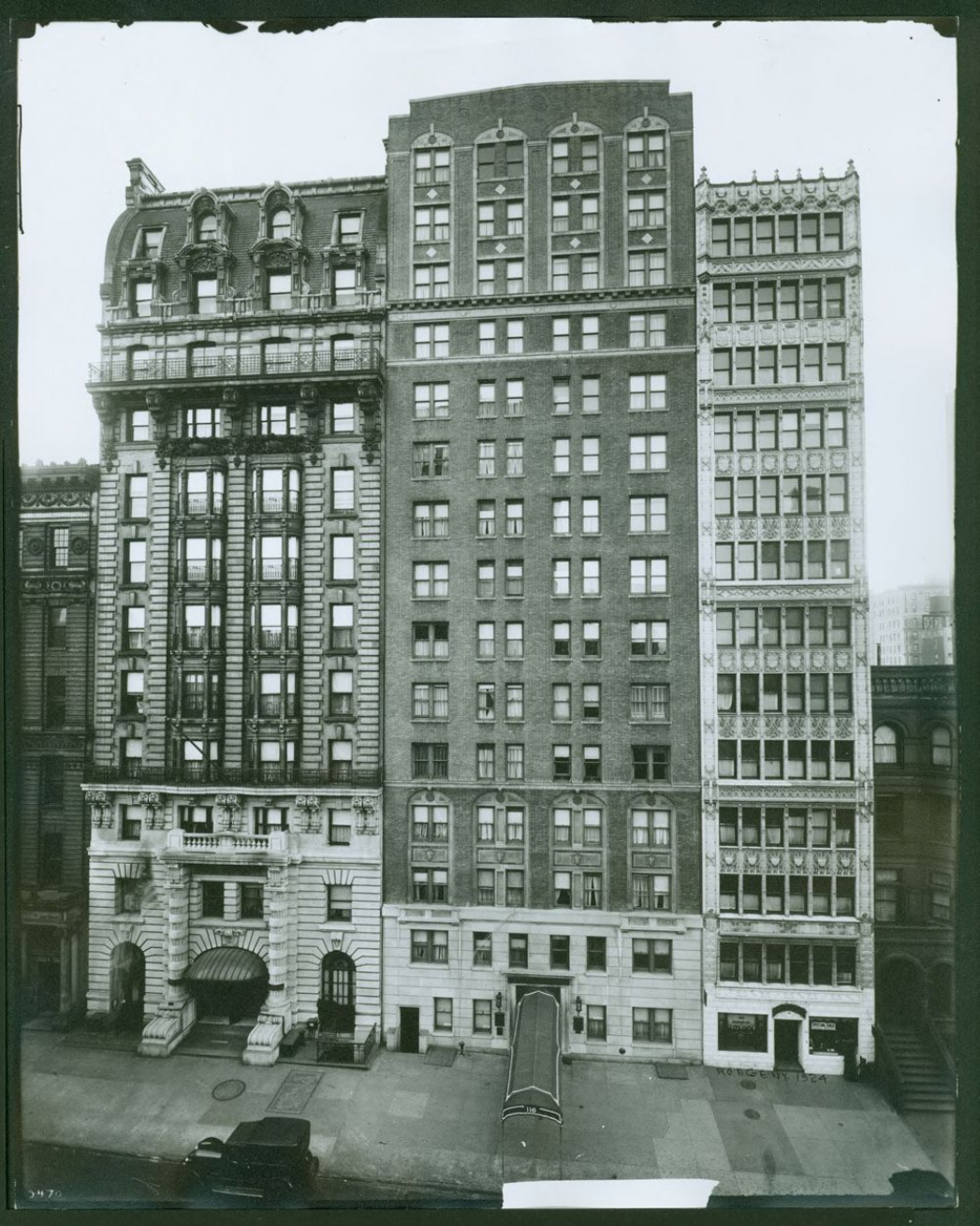 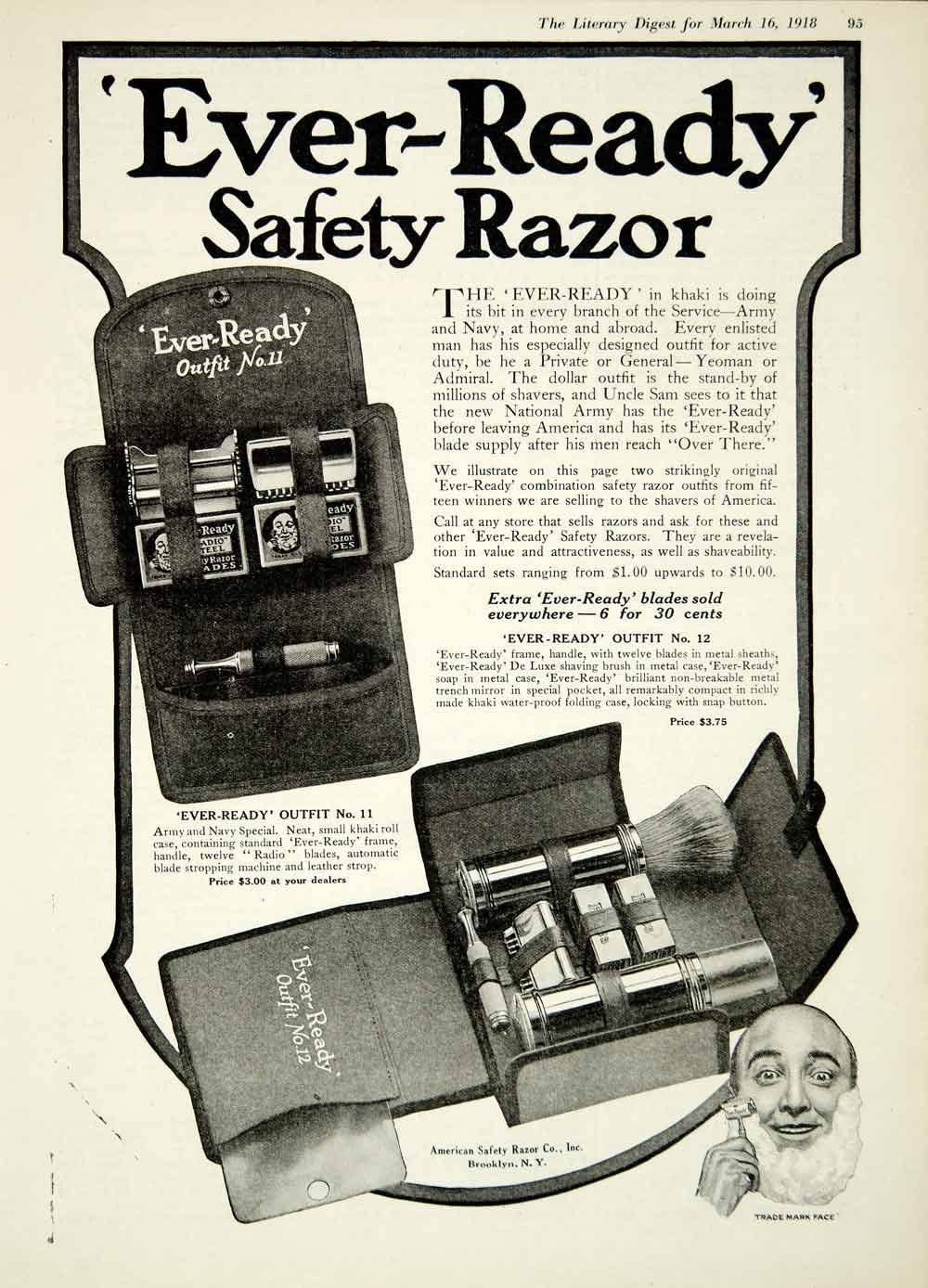 Resident Joseph Kaufman was an executive at the Ever-Ready Razor Company.

America was embroiled in the world war at the time.  On May 18, 1917 the Government had enacted the Selective Service Act, which enabled an army to be raised through conscription.  One Earlton resident, however, was not eager to see action in Europe.

Russell Storey Hubley was an actor.  When he registered with his local board on June 5, 1917 he brought along his wife, Edna.  On his questionnaire he listed himself as a married man with his wife “dependent on him.”  Hubley did not expect the authorities to check his story.  When they found out that Edna Clarke and he were not married, both were arrested.  Hubley was tried and found guilty on June 21, 1918.  He got his wish—he did not have to serve in the military, but instead was sent to the Atlanta Penitentiary for a year and one day.  Edna was indicted on charges of conspiring in the plot.

The long series of unfortunate incidents continued at the Hotel Earlton.  Coffee importer Manuel M. Clavizo had lived in the building for some time in 1919.  The Sun said that he “had large interests in this city as well as in South America.”  But on September 25, 1919 police were called to his apartment where he had been “found dead, hanging by a wire from a chandelier,” according to the New-York Tribune.  No reason for the 40-year-old’s suicide could be determined.

But their marriage, too, did not start out well.  Three months later, on February 2, 1921, Anna had left.  In court she charged him with “a series of cruel and inhumane acts, including several beatings,” and told the court that he first struck her four days after the wedding.  The Evening World reported “and on another occasion, she says, he showed her a bottle of sulphuric acid with which he said he intended to disfigure her face.”  The actor told her “he did not marry her to support her, and suggested that she join a musical revue chorus where she might make wealthy friends,” said the article.  Anna obtained her divorce and $125 per week alimony.

A bizarre incident occurred on September 23, 1933.  Lew Stanley was sitting in his automobile at 45th Street between Sixth and Seventh Avenues when four men pointing revolvers at him got in.  They drove to an empty apartment at 51st Street and Ninth Avenue where they demanded $5,000 ransom.

Among the residents not involved in scandal or intrigue was respected financial journalist James Vance Gwin of the American.  He had come to New York in 1912 at the age of 21 and worked on the staffs of the New York City News Association, the Press, The Sun and, finally, the American.  The Sun described him as being “well-known in newspaper circles.”  Gwin was just 36-years old when he became ill and, after being sick for weeks, died in his apartment on May 8, 1927.

The esteem with which Gwin was held among newspaper men and residents of the Hotel Earlton was reflected at his funeral.  Among the floral tributes from City Hall reporters, the American, and the American’s editor, was one from “associates of Mr. Gwin’s at his late residence,” said The Sun.

A bizarre incident occurred on September 23, 1933.  Lew Stanley was sitting in his automobile at 45th Street between Sixth and Seventh Avenues when four men pointing revolvers at him got in.  They drove to an empty apartment at 51st Street and Ninth Avenue where they demanded $5,000 ransom.  Stanley was held for hours during which he insisted he did not have that much money.  The New York Evening Post later said “after eight hours of dickering he reduced it to $3,000.”

With the amount agreed upon, Stanley was taken to the Hotel Earlton where “they accepted the $187 he had there” as a down payment.   The Post reported “After that he called in the police, who picked up the two suspects, burly six-footers.”  Eventually all four men were arrested.

But the Stanleys’ problems were not over.  Mrs. Stanley was scheduled to testify at the trial on February 15, 1934.  Two evenings before the date a man knocked on the apartment door.  Mrs. Stanley told him her husband was out, but he insisted on waiting.  The New York Sun reported “A few minutes later three other men entered.  They then proceeded to ransack the place, taking $8 and before leaving giving Mrs. Stanley a severe beating.”  Police told reporter it was “an effort to dissuade her from testifying against her husband’s kidnappers.”

A 1950 renovation created two stores at street level with a “beauty parlor and corset display room” on the second, along with two apartments.  It was no doubt at this time that the striking terra cotta tiles were covered over with a pseudo-modern façade.  The building was converted to cooperative apartments in 1985; and very recently the lower two floors were restored, once again revealing Buchman & Fox’s Gothic-themed tilework.