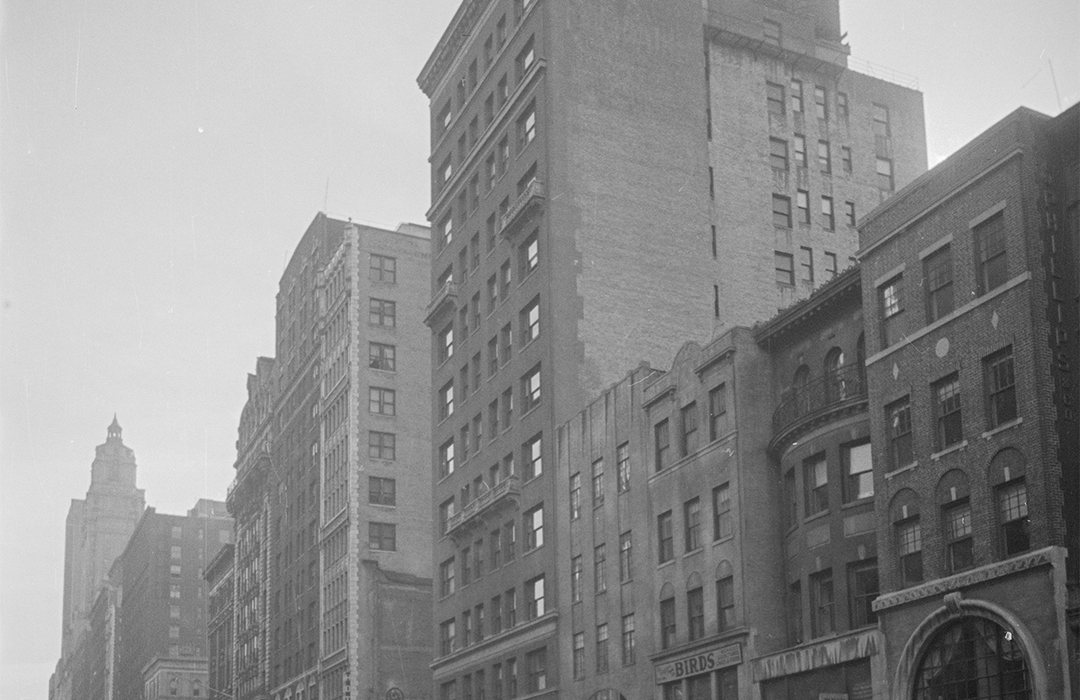 In October 1915, George B. Beaumont of the George Beaumont Co. development firm purchased the two four-story brownstone houses at 124 and 126 West 72nd Street.  They sat along a block of upscale private homes that was only beginning to see change.  Like several other development firms, George Beaumont Co. acted as its own architect and a month later the firm filed plans for a 12-story apartment building on the plot to cost the equivalent of $5.3 million today.

Almost simultaneously, on October 23, 1915, the Real Estate Record & Guide headlined an article “West 72nd Street in Transition State.”  The article mentioned, “years ago West 72d street was strictly a residential thoroughfare…But people are no longer willing to undertake the care of a private house, hence the apartment house construction movement.”  The article noted that ground would be broken for another, at 124-126 West 72nd Street, on November 1.

Completed in 1916, the building was sparsely ornamented.  Its brown-brick, Renaissance-inspired design offered the viewer three stone balconies and an equal number of stone bandcourses for interest.  Inside, the “very attractive” apartments, as described by one advertisement, consisted of four or five rooms each plus a bath.  The ad noted the building provided “first class service.”

While the appearance of West 72nd Street changed, much of its upscale tenor remained.  Typical of the residents here were the well-to-do Rufus H. Barr and his wife.  When their apartment was broken into in December 1917, the thieves made off with the equivalent of $60,600 worth of jewelry.

Jennie Lebofsky did not pay the rent on her apartment.  It was taken care of by millionaire contractor Joseph Auditore.  Lebofsky’s sugar daddy was living a double life.  While all Jennie’s neighbors knew her as Mrs. Auditore, he was married and lived with his actual wife, Josephine, and their four children in Brooklyn.

The charade ended on May 9, 1920 when Auditore died suddenly in Jennie’s apartment.  When investigators realized that he had purchased a $50,000 life insurance policy in Jennie’s name, and that $80,000 of his $2 million estate had been left to his personal physician “for purposes as yet unexplained,” according to The Buffalo Enquirer on May 26, their suspicions were raised.  On May 22, The New York Times reported, “As yet Dr. Adolph Monae-Lesser has refused to disclose the identify of the beneficiary of the $80,000 whom Auditore preferred not to name in his will.”  Making the circumstances of Auditore’s death even more questionable was the fact that the will had been signed two days prior to his death. 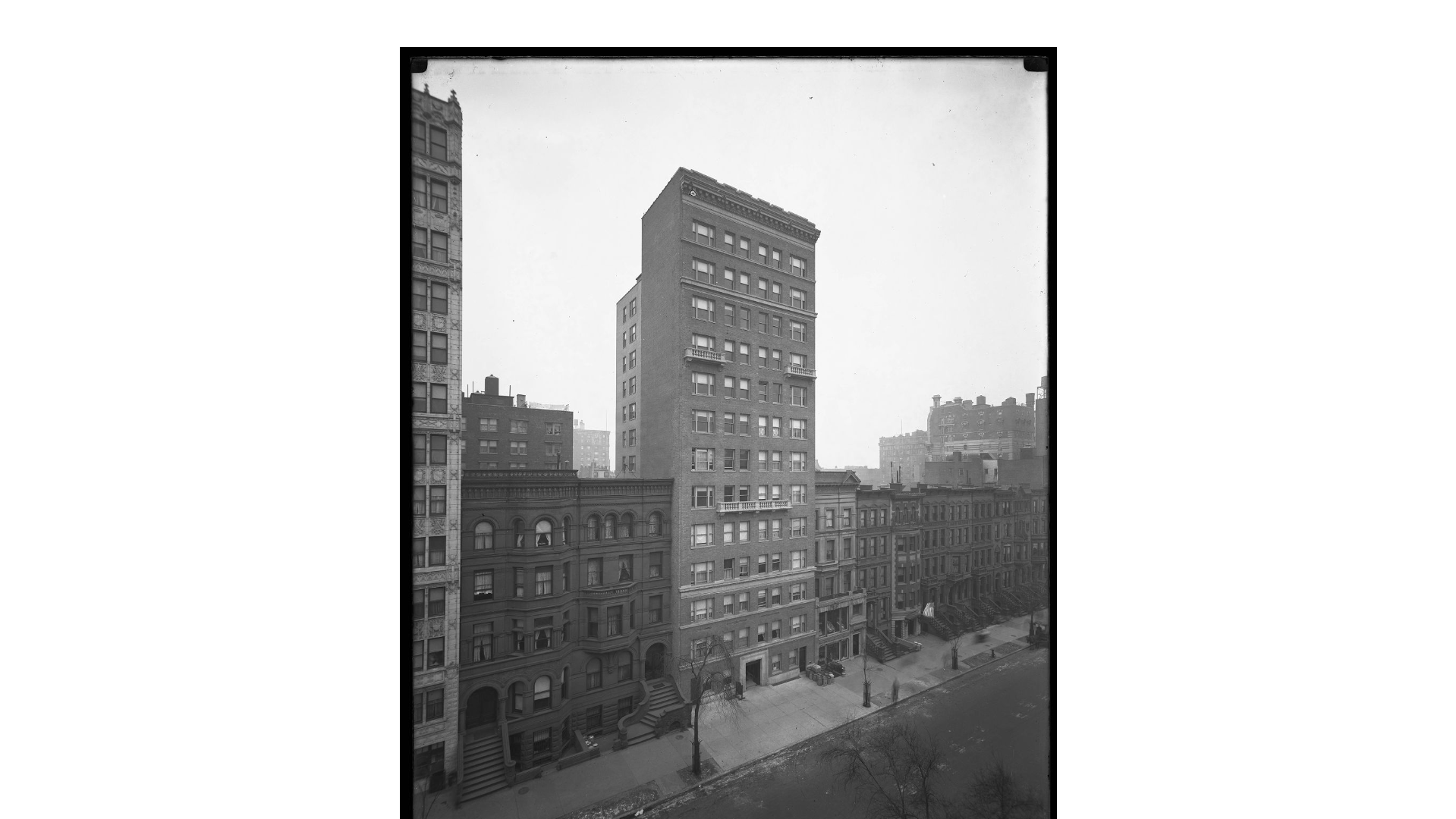 Less than two weeks after the incident, District Attorney Harry E. Lewis said, “While no accusations are being made, I am inclined to believe that any suspicion entertained would be best allayed by exhuming the body and determining the exact cause of the death.  This man died under somewhat dubious circumstances, and the best thing to do is to clear the matter up entirely.”  Josephine Auditore was convinced by the District Attorney’s office to approve her husband’s exhumation and autopsy.

The probation of the Auditore’s will was held up while the procedure took place.  On May 29 the autopsy findings were released, showing that Auditore had died of lobar pneumonia “and not to unnatural causes.”  Jennie Lebofsky emerged from the unnerving episode with a much fatter bank account and a greatly bruised reputation.

A renovation to the building in 1933 carved three store spaces into the ground floor and added a penthouse restaurant and cabaret (with “no dancing,” cautioned the Certificate of Occupancy).  Two years later the idea of a rooftop nightclub seems to have fizzled and the penthouse was converted to two apartments.

Ten women were arrested on vice charges in the building in April 1935.

At least two of the apartments in the building that year came under vice squad scrutiny.  Ten women were arrested on vice charges in the building in April 1935.  However, getting the men who were in the apartments at the time to testify proved a challenge.  On April 25 the Times Union reported on the days-long trial.  But the two men called to the stand that day proved to be of no use to the prosecution.  “Both testified they went to the apartments to attend a party and not for immoral purposes,” said the article.

In May 1969, Pachuka, a gourmet cookware shop opened in one of the store spaces, and by 1976, Benny’s Shoe Repair was in the shop next door.  Stone Free Kids, a children’s clothing store, occupied the third store by 1977.

In the meantime, the apartments were home to respectable citizens like Dr. Vladimir Weinberg and his wife, the former Florence Drachtenberg.  Weinberg was a 1915 graduate of Zurich University Medical School.  In 1925, he became the first president of the Russian Medical Society in New York.

A renovation completed in 1990 resulted in three apartments per floor (plus the two in the penthouse level).  The changes did not affect the exterior, which remains much the same as when it opened in 1916.