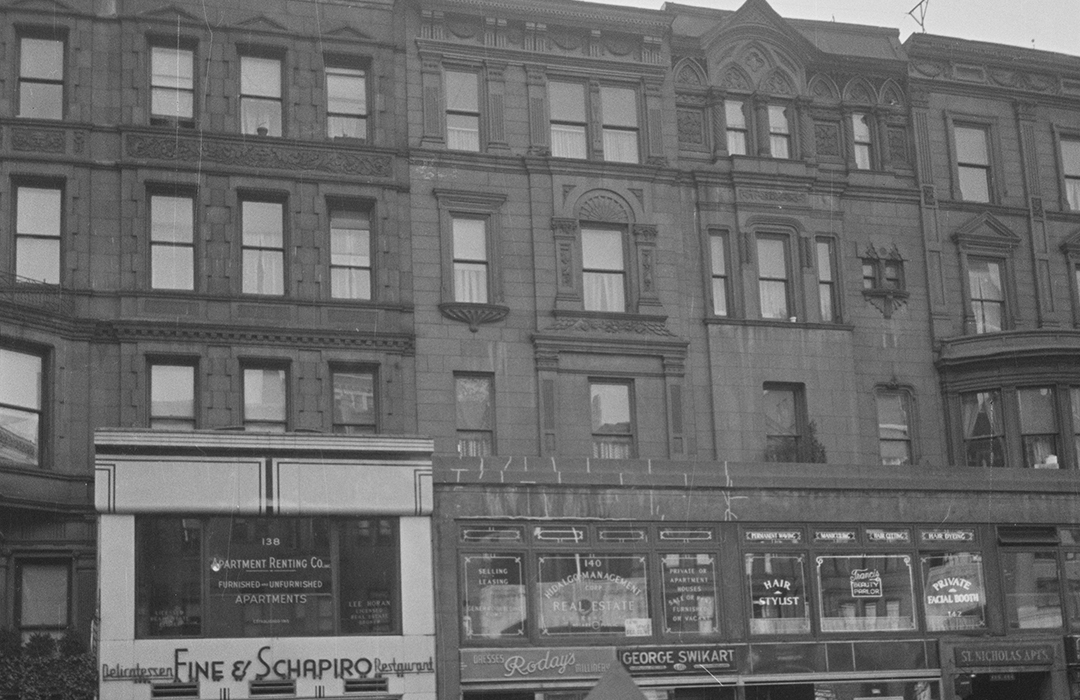 In 1884 real estate developer George J. Hamilton moved into his newly completed home at 140 West 72nd Street, between Columbus Avenue and Broadway.  It was one of four houses designed for him by architects Thom & Wilson the previous year.  Each cost Hamilton the equivalent of about $1 million in today’s money to construct.

By the early 1890’s 140 West 72nd Street had become home to Susan Embury, the widow of Abraham Bininger Embury (who, like Hamilton, had been a developer).  Susan’s was a well-filled home.  Living with her were the families of her two married children, Susan and Aymar.  Susan had married Dr. Frank Jefferson Blodgett on January 7, 1891.  Aymar’s wife was the former Fannie Miller Bates.  Embury and Fannie had four children, Aymar Embury II, Susan, Lucy, and Alford Bates Embury.

Susan Embury died in the family’s country home in Stockbridge, Massachusetts on August 10, 1893.  Her body was returned to New York and her funeral was held in the drawing room of 140 West 72nd Street two days later.

Aymar Embury was a Columbia College-educated attorney.  His son, Aymar Embury II graduated from Princeton University in 1900 with a degree in civil engineering.  He would go on to teach architecture at Princeton, and then become one of the early 20th century’s most esteemed architects.  Around 1904, the year Aymar Embury II married, his immediate family left West 72nd Street.

[Aymar Embry II] would go on to teach architecture at Princeton, and then become one of the early 20th century’s most esteemed architects.

The Blodgetts remained, with Susan regularly appearing in the society pages for her “at homes” and receptions.  The couple maintained a country home in Camden, Maine.

In the first years following World War I, West 72nd Street was becoming increasingly commercial.  In November 1919 the Blodgetts sold 140 West 72nd Street to Elmer E. Smathers, who had been buying up other houses on the block.  The New York Herald said he purchased the Blodgett home “for alteration.”

Smathers hired architect Robert T. Lyons to convert the top three floors to non-housekeeping apartments (meaning there were no kitchens).  The stoop was removed, and a two-story commercial front installed to accommodate a store on the ground floor and an office above it.

In January 1921 the fur store of S. Schiffman & Co. moved into the store.  The second-floor space was leased to Dr. William B. Pritchard, an alienist.  The term, no longer used today, referred to a psychiatrist who assessed the mental competence of a defendant in a court of law.

At around 5 a.m. on November 8, 1921, an automobile drove up to the curb in front of 140 West 72nd Street and five men got out.  The New York Herald reported they “overpowered a watchman, forced their way through a door guarded with a burglar alarm device, and stole furs valued at $50,000 from Shipman [sic] and Co., furriers.”  The burglar alarm did its job, and more than 100 police descended upon the store.  But before they could arrive, said the New York Herald, “the thieves had disappeared with an automobile load of loot.”  The value of the haul would be nearly three-quarters of a million in today’s dollars.

Dr. Pritchard suffered some humiliating publicity in January 1922.  Earlier, in June 1921, he had been called to testify about the sanity of Charles T. Davis, a wealthy manufacturer of surgical instruments who had murdered Detective Joseph Bridgetts.  Pritchard told the court that Davis was insane and incapable of standing trial.  He was sent to the Hospital for the Criminally Insane at Matewan, New Jersey.  Now, seven months later, when George W. Heran, an insurance adjuster, sued for $200,000 in damages, Davis’s lawyer called Dr. Pritchard back.

Pritchard now told the court that Davis could testify in his defense.  He said, “Davis is now capable of attending to his business duties and able to verify the answers.”  State Supreme Court Justice Aspinall was enraged.  He exclaimed to Davis’s attorney, “Why only in June last Dr. Pritchard swore that Davis was a paranoiac with homicidal tendencies, a fool and an idiot and in this affidavit, he says he is sane enough to attend to his business duties!”  The judge went on, “This man Davis is insane, it seems, when it comes time to try him for murder in the first degree…But yet he is sane when it comes to actions against him to the tune of $200,000.  Oh no, nothing doing.”

Dr. William B. Pritchard’s office became the headquarters of the Central Lodge Theosopical Society before long.  On November 20, 1925, Narayan Bhikaji Parulekar of India spoke here on “Gandhi and Tagore, a comparison.”

The judge went on, “This man Davis is insane, it seems, when it comes time to try him for murder in the first degree…But yet he is sane when it comes to actions against him to the tune of $200,000.  Oh no, nothing doing.”

In the early 1980’s Foot Fetish Shoe Express occupied the store, followed by Green Cleaners and then Ecomat Cleaners & Laundromat.  The latter remained until 1999 when Roberto Vascon opened his handmade purse boutique.  Lynn M. Ermann, writing in The New York Times on August 8, 1999, said Vascon’s “richly colored handmade purses attracted a cultlike following around the city, especially on the Upper West Side.”  The shop remained in the space at least through 2005.

Almost unbelievably, in 2007 the apartments on the upper floors were still listed in Department of Buildings records as “non-housekeeping,” with an added warning that “not more than two families to cook independently on the premises.”  In 2012 the upper floors were combined with the row of buildings extending through 154 West 72nd Street, now encompassing 56 apartments.