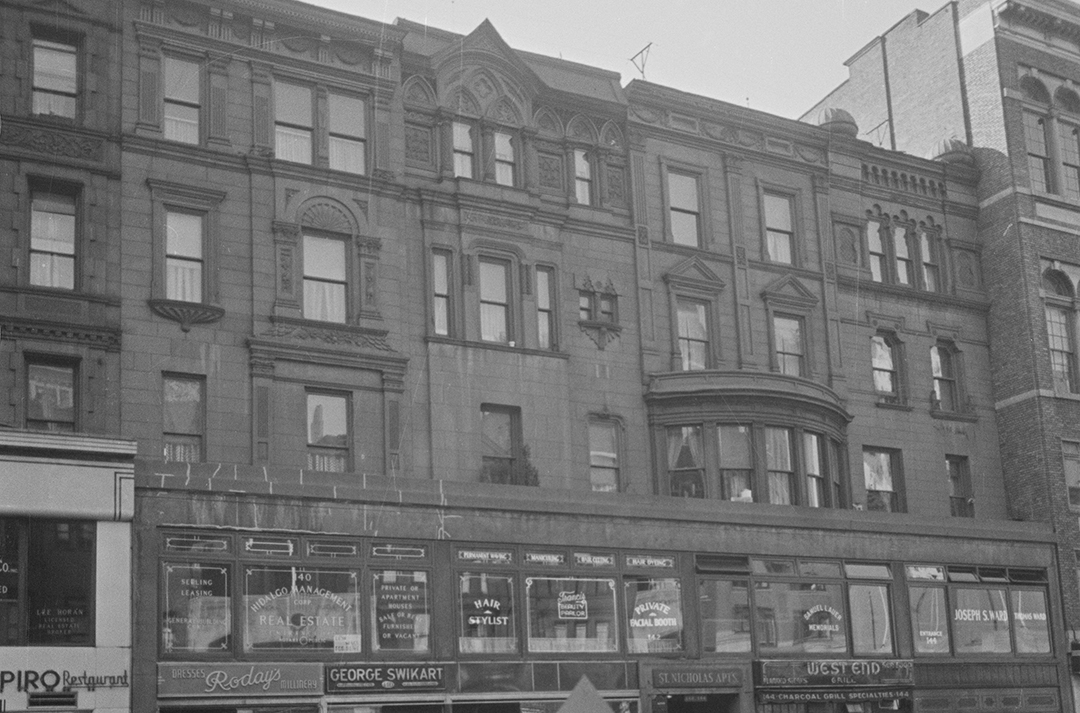 In 1885, the architectural firm of Thom & Wilson designed five architecturally harmonious rowhouses at 140 through 148 West 72nd Street.  Completed in 1887, the 20-foot-wide, high-stooped houses were faced in brownstone.  The architects enhanced their Northern Renaissance Revival design with Moorish elements to create elaborate, exotic facades.  Nowhere was this more apparent than in 142 West 72nd Street, there the intricate parapet above the top floor windows detonated in arches, quatrefoils, and a playful gable.

In October 1887 that house was purchased by Mrs. Barney Williams, who moved in with her daughter, Marie Kathleen.  There were few people in New York City who did not know Mrs. Barney Williams.  Born Maria Pray on April 19, 1830, she was the first of the renowned Pray sisters to go on stage.  She first married actor Charles Mestayer and after his death in 1849, she married Bernard O’Flaherty who had arrived in New York from Ireland in 1836.

O’Flaherty was known on stage as Barney Williams.  Maria appeared with him in 1850 in Ireland As It Is and they worked together after that until his death in 1872.  Maria first used the stage name Judy O’Flahrety, later simply appearing as Mrs. Barney Williams.  The husband-wife team were known internationally.  Upon his death of a stroke in 1876, his estate was estimated at nearly $10 million in today’s money.

On June 8, 1888, just eight months after Maria bought the house, The New York Times reported, “One of the prettiest weddings of the season was that of Miss Marie Kathleen Williams, daughter of the late Barney Williams, the comedian, and George H. B. Mitchell.  The wedding service was celebrated at the residence of the bride’s mother.”  Among the guests that afternoon were General William Tecumseh Sherman, famous actor Lester Wallack and his wife, and society restauranteur Charles Delmonico.

O’Flaherty was known on stage as Barney Williams.  Maria appeared with him in 1850 in Ireland As It Is and they worked together after that until his death in 1872.

Marie and her new husband moved into the house with her mother.  Marie Mitchell entertained lavishly.  On October 29, 1888, the New York Amusement Gazette reported, “Mr. and Mrs. G. H. B. Mitchell nee Williams…gave a dinner on Wednesday last in honor of Mrs. Mitchell’s birthday.  Covers for sixteen were laid by Maresi, who quite covered himself with glory by his exquisite service and delicious examples of culinary art many of which were original for the occasion.”

George Mitchell was a partner with his brother William L. Mitchell, in Mitchell Bros. coffee importing company.  He was, as well, the president of the Nassau Coffee Co.  His own financial status was evidenced in his memberships to the exclusive Manhattan, New York Yacht and New York Athletic Clubs.

The population of 142 West 72nd Street increased on May 11, 1889 with the birth of George Williams Mitchell, and again on July 5, 1894 when Ethel Williams Mitchell was born.  Also living in the house were four servants.

Although she had not performed for nearly three decades, American theater lovers were still interested in Maria’s life.  On March 24, 1905, The Evening Enterprise of Dutchess County, New York reported, “Mrs. Barney Williams, widow of the once famous Irish comedian…has just entered her eightieth year.  She lives at 142 West Seventy-second street in New York, and is surrounded by a large circle of relatives.”  The article added, “Mrs. Florence, her sister, who used to be the dancing girl Malvina Pray, is also living in New York.” 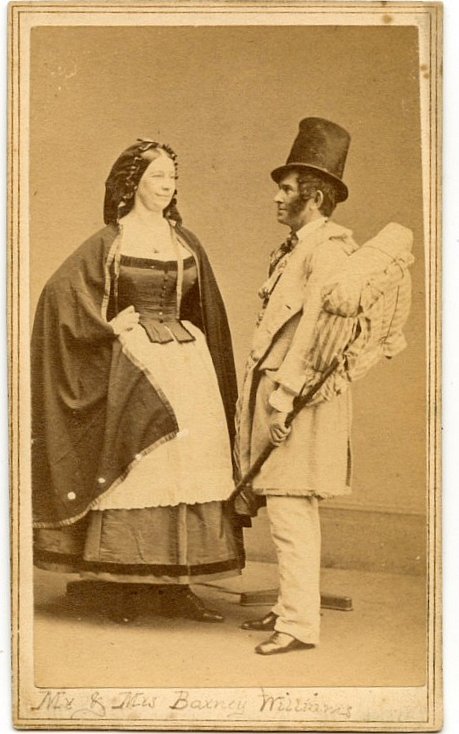 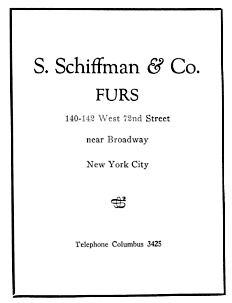 Marie Mitchell’s entertaining during the winter season of 1909-10 was especially notable.  Ethel Mitchell was introduced to society that debutante season.  It began in December with a “dance for young people” in the West 72nd Street house.

Six months after that happy event, on May 6, 1911, Maria died.  Her death was reported in newspapers across the country.  A telegram to The Washington [D.C.] Herald announced, “Mrs. Barney Williams, widow of an actor famous for his Irish impersonations in this city half a century ago, and herself on the stage from childhood until the death of her husband, 1876, died to-day at her home, 142 West Seventy-second street, in her eighty-seventh year.”

Following her period of mourning, Marie re-entered to the social scene.  On January 5, 1913, The New York Press reported, “Mrs. G. H. B. Mitchell of No. 142 West Seventy-second street will give a dance to-morrow night in Delmonico’s, which promises to be largely attended by the fashionable set.”

George W. was married to Lillian A. Sanford in her parents’ home in September 1914.  Four years later, on April 6, 1918, the Mitchells hosted a reception and dance to announce Ethel’s engagement to Theodore C. Corwin.  The New York Herald reported, “The house was decorated with pink roses, palms and flags.  There were one hundred and fifth guests.

Five months later, a much more subdued announcement emanated from the West 72nd Street residence.  On September 22, the New York Herald wrote that the engagement had been broken “by mutual consent.  No reason was given.”  Ethel would never marry.

On September 22, the New York Herald wrote that the engagement had been broken “by mutual consent.  No reason was given.”

At the time of the article, West 72nd Street was undergoing significant change.  Its mansions were increasingly being converted to businesses and apartments or being razed for commercial buildings.  In April 1920, the Mitchells sold the house to developer Elmer E. Smathers, who simultaneously purchased 140 and 144 on either side.

Smathers hired Robert T. Lyons to remove the stoops and installed two-story commercial fronts that would accommodate a store at sidewalk level and an office above.  The uppermost floors were converted to apartments.  Interestingly, George W. Mitchell and his wife took one of those apartments, remaining at least through 1922.

Throughout the 1970’s the store was the D. M. R. West Color Center, a paint store.  It was replaced by Deals & Co. around 1985, which offered “men’s and women’s natural fiber clothing at off prices.”  By the turn of the century, New Nutrisserie occupied the space, which offered tropical fruit flavored sorbets and gelatos.

The passerby who pauses to look above the storefront is rewarded with the upper three floors of Mrs. Barney Williams’s 1887 mansion–Thom & Wilson’s exotic Moorish details still wonderfully intact.