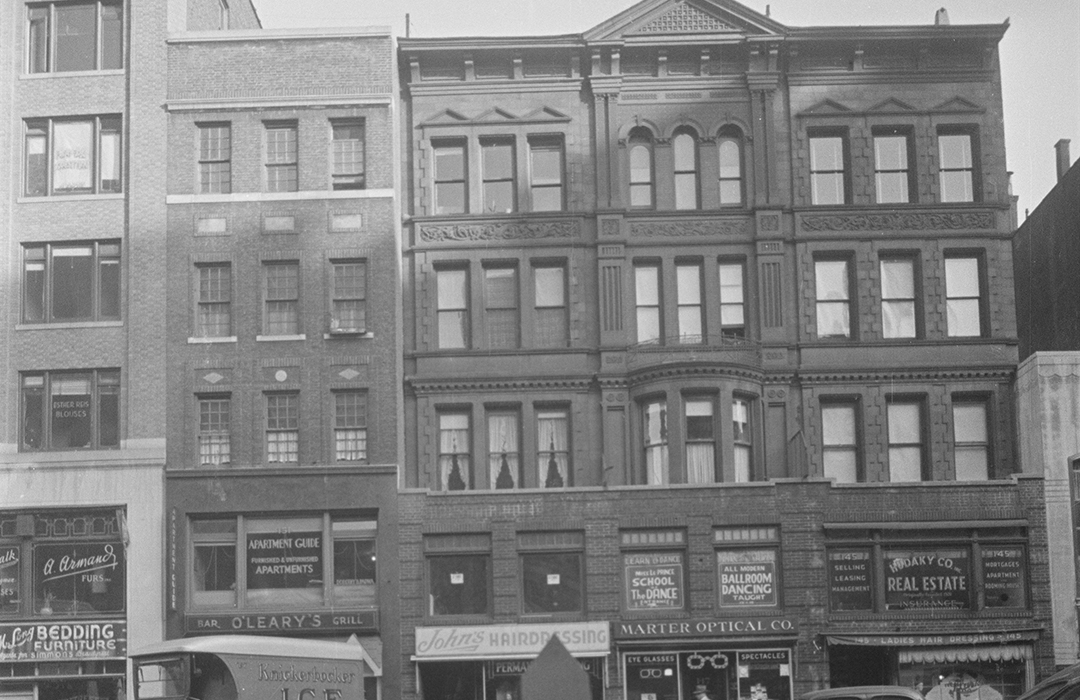 Francis and Margaret Crawford worked hand-in-hand.  Francis owned a construction company and his wife developed real estate properties.  In 1883, they hired Gilbert A. Schellenger to design three brownstone-fronted rowhouses on the south side of West 72nd Street between Broadway and Columbus Avenues.

Each of the homes was four stories tall above a high stone stoop.  Schellenger designed the balanced Renaissance Revival style group to appear nearly as a single structure.  The identical houses at 145 and 149 took backstage to the center residence with its dramatic bowed bay, arched top floor windows, and pyramidal parapet.

145 West 72nd Street became home to George Browne Hurd and his wife, the former Florence Huntoon.  He was the principal in George B. Hurd & Company, a stationery firm established by him and his brother Frank B. Hurd in 1888.  It was reportedly the first company to offer pre-packaged boxed stationery.  Sharing the house was the couple’s stockbroker son, Frank Huntoon Hurd.

Living next door at 147 West 72nd Street was Edward Baker Talcott, a partner in the Wall Street brokerage firm of Talcott & Sons.  He and his wife, the former Sara T. Roberson, had a three-year old son when they moved into the new house.  Tragically, he died in 1886 at just six years of age.

Talcott was an avid baseball fan and in 1889 invested heavily in the New York Giants.  Upon returning from Europe in 1892, he found the club teetering on bankruptcy.  Talcott took control, was appointed managing director and by the end of the 1894 season had turned the club around, earning a profit that year.  Having nearly lost the equivalent of $613,000 today, The Journal reported “After the excellent showing made by the Giants in 1894 Mr. Talcott decided to retire from active interest in the national game and he sold out his share of the stock.”

The first occupants of 149 West 72nd Street were Eugene Hiram Paddock and his wife, the former Lizzie Anzolette Murphy.  The couple had been married just two years when they moved in, and would have four children here, Helen, Eugene, Anna, and Arthur.  A dry goods merchant, Paddock’s spare time was spent in scholarly pursuits.  He was a member of the board of trustees of Epiphany Baptist Church on Madison Avenue, a member of the American Association for the Advancement of Science, the New York Academy of Science, the Museum of Natural History and the Metropolitan Museum of Art.

Living with the family in the 72nd Street house in 1910 were four female servants.  Like their neighbors, the Paddocks spent their summer months at resort areas like Long Beach, New Jersey, and Lake Placid, New York.

Following Eugene’s death in 1912, his brother Charles and his family moved into 149 West 72nd Street with Lizzie and her children.  He and his wife, Ella Louise Murphy, had four children, Josephine, Ethel Louise, Royce and Lincoln. 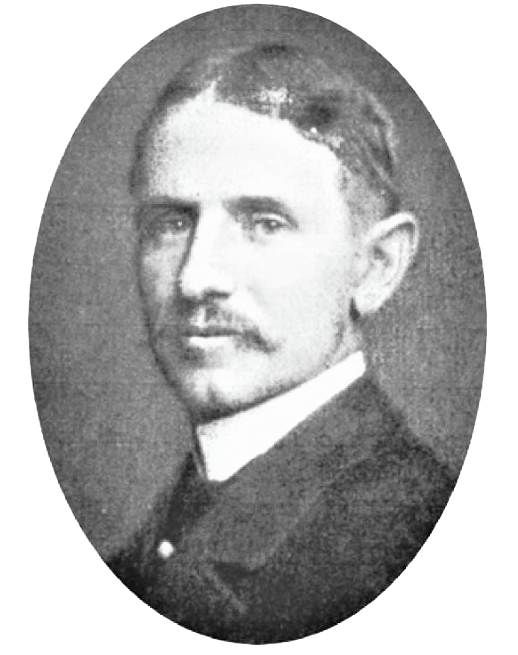 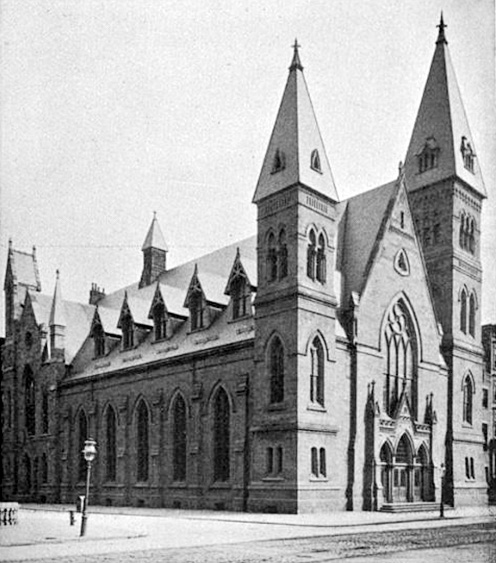 Epiphany Baptist Church on Madison Avenue where Prescott was a trustee

Charles Paddock’s children had noticeable artistic talents.  Ethel Louise exhibited in the Philadelphia Academy of the Fine Arts in 1918, and Josephine had already made a name for herself.  A graduate of the Art Students League of New York, two of her watercolor sketches had been exhibited in the famous 1913 Armory Show.

By now West 72nd Street had drastically changed as the formerly residential street became increasingly commercial.  After the Hurds sold 145 in 1905, it was operated as a boarding house.  The former Talcott house suffered the same fate that year.  Interestingly, in 1911 Lizzie Paddock purchased 147, while continuing to lease it to a boarding house proprietor.

The Paddock family lived on in 149 through 1923 as one-by-one the children of Eugene and Lizzie, and Charles and Ella, were married.  In 1923, 147 and 149 were joined internally as architect H. P. Zoller converted the lower floors to storefronts with apartments above.

A year earlier architect Samuel L. Herts had made the same alterations to 145, installing offices in first and second floors with apartments above.  An advertisement in 1925 offered the two-room apartments with a kitchenette at rents between $1,020 and $1,200 per year—about $1,450 per month in today’s money.

According to The New York Daily Post, she told police “Miss Lawson had lived in fear of bootleggers for two weeks before her death, after two men called with ‘a case of gin’ which they described as a gift from a friend.”

One of those apartments was shared by Ziegfeld Follies showgirl Charlotte Wakefield and pianist Louise Lawson in 1923.  Louise moved to 22 West 77th Street the following year, but Charlotte stayed on in 145.  Police questioned Charlotte hoping for leads after Louise was found murdered in her apartment.  According to The New York Daily Post, she told police “Miss Lawson had lived in fear of bootleggers for two weeks before her death, after two men called with ‘a case of gin’ which they described as a gift from a friend.”  Suspicious, Louise had not let the men in, but it seemed to Charlotte that they were somehow responsible for her friend’s death.

In the early 1940’s the first floor space of 145 was home to the odd combination of a chiropractor’s office and ladies’ hair dressing salon, while the second floor held the “Spiritualist Chapel” of Rev. Robert L. Hector, who marketed himself as a psychic.  As the century drew to a close the Cuban-Chinese restaurant LaDinastia occupied the ground floor.  It opened in 1994 and remains there today.   For years in the 1970’s the hearing aid store of Marter & Parsons, Inc. was at 149 West 72nd Street, where Tip Top Kids Shoes has operated since around 2004.  And in between, a clothing store and body spa operate from the former Talcott house.

While the lower two floors of the 1883 trio are unrecognizable today, the three upper floors are amazingly intact, giving us a glimpse into the upscale tenor of the block during the 19th century when three wealthy families lived here.