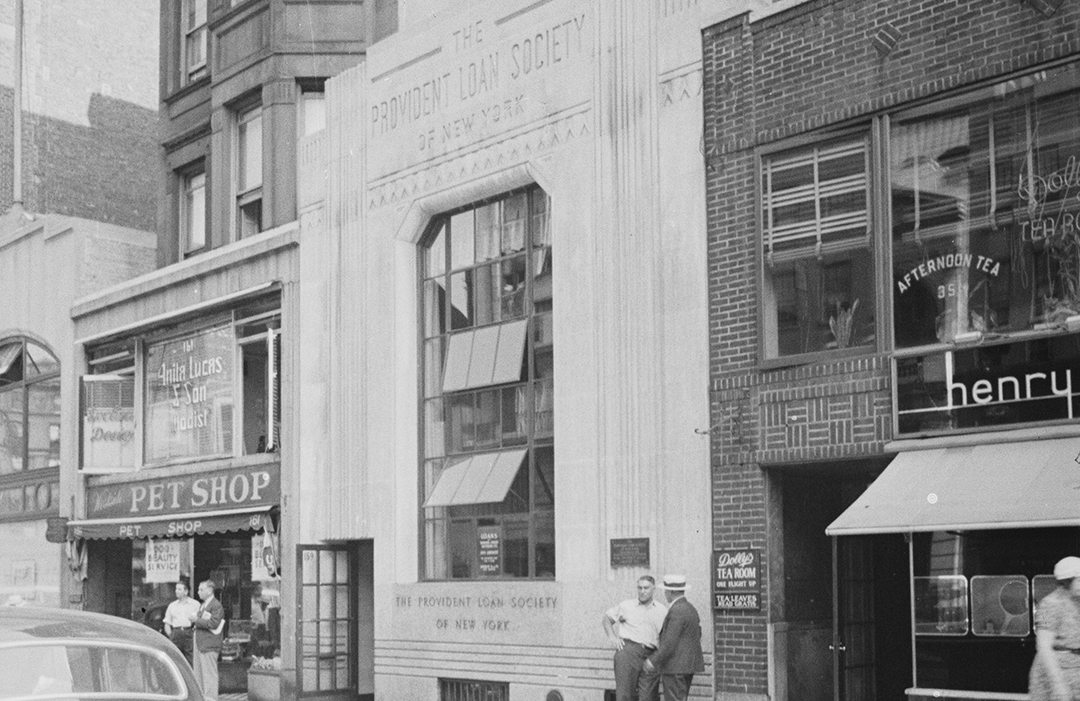 By the end of World War I, the formerly refined residential neighborhood of West 72nd Street between Columbus and Amsterdam Avenue become commercialized.  The high-stoop house at 159 West 72nd Street was converted to “bachelor apartments” that year.  But the end of the line for the old dwelling was on the distant horizon.

In 1932, the Provident Loan Society purchased and demolished it, and hired the architectural firm of Renwick, Aspinwall & Guard to design a modern bank building on the site.  Completed before the end of the year, the one-story structure was clad in gleaming white limestone.  Its sleek Art Deco façade was distinguished by two full-length fluted piers and a single soaring window.  The organization’s name was announced within the stepped parapet.

A special committee of the Charity Organization Society had recommended on May 9, 1892 that an institution be formed “to lend money at reasonable rates to the poor upon pledge of personal property.”  The committee was, in fact, suggesting a government-approved pawnshop for the poor.

In 1892, coal production in America had dropped off and stock prices and business incorporations began falling off.   The resulting recession hit the poorer classes hardest.  With no money coming in and no collateral for loans, indigent New Yorkers took their possessions to unscrupulous pawn brokers to obtain cash for food and rent.  It was a situation that did not go unnoticed by some of those more fortunate.

A special committee of the Charity Organization Society had recommended on May 9, 1892 that an institution be formed “to lend money at reasonable rates to the poor upon pledge of personal property.”  The committee was, in fact, suggesting a government-approved pawnshop for the poor.

Nothing came of the idea for a year, when the Financial Panic of 1893 swept the nation.  It would last nearly a decade and would be the worst depression the nation would endure until the Great Depression of 1929.  Attention to the idea was renewed by the increased suffering of New York’s poor.  Seth Low, who was Chairman of the Mayor’s Relief Committee, encouraged the passage by the legislature that incorporated the Provident Loan Society of New York on May 21, 1894.

By now, the Provident Loan Society had 18 branches throughout the city.  When the West 72nd Street office opened in December 1932, an advertisement explained “the loans which the Society makes are pledge loans on jewelry, silverware, or other valuable personal property.  No endorsers are required.  Interest is not deducted in advance.  There are no investigation or other fees, and no fines.”

For more than three decades, the Provident Loan Society provided reasonable, low-fee loans to Upper West Side residents from its West 72nd Street location.   But then in 1973 the property changed hands.  And the Nelst Realty Co. already had a tenant in mind.  The retail paint firm of Janovic/Plaza had been in business on the East Side for 85 years and now tested the waters on the opposite side of Central Park.

What had been a remarkable building for all the right reasons was now remarkable for the wrong reasons.

On June 28, 1973 The New York Times journalist Ruth Robinson announced, “The shop occupies the old Provident Loan Society building at 159 West 72d Street and has retained the art deco ceiling and stained-glass skylights.”  That was about all the firm retained.  Neist Realty Co. had commissioned architect Abraham Sperling to remodel the striking façade.

Sperling removed the ziggurat-inspired parapet, expanded the second-floor window and installed a storefront at street level.  The remaining façade was covered in tiles of varying shades of brown.   What had been a remarkable building for all the right reasons was now remarkable for the wrong reasons.

Little had changed to the building since Sperling’s remodeling.  Today Janovic/Plaza is known as Janovic Paint and Decorating Center, having been purchased by Benjamin Moore & Co. in 1999.