In 1884 developers James R. Smith and Cornelius W. Luyster completed a row of 10 upscale homes along the north side of West 72nd Street, between Amsterdam and Columbus Avenues.   Designed by the architectural firm of D. & J. Jardine, each of the high-stooped homes was 22-feet-wide and rose four stories above an English basement.

Parker R. Whitcomb and his wife, Georgianna M., purchased 161 West 72nd Street.  The couple had a son, George B., and two daughters, Georgianna and Ellaline (who were known familiarly as Georgie and Ella).  The family’s summer home was in Long Branch, New Jersey.

Whitcomb had made his fortune in “patent medicines” marketed under the name of Professor W. H. Peeke.  An advertisement in the U.S. Journal of Medicine in 1894 touted:

Prof. W. H. Peeke, who makes a specialty of Epilepsy, has without doubt treated and cured more cases than any living Physician.  His success is astonishing.  We have heard of cases of 20 years standing cured by him.  He publishes a valuable work on this disease which he sends with a large bottle of his absolute cure, free to any sufferer who may send their P.O. and express address.  We advise anything wishing a cure to address, Prof. W. H. Peeke, F. D., 4 Cedar St., New York

Georgie was an accomplished young horsewoman and stabled a riding horse nearby at Durland’s Riding Academy.  At the New Jersey estate she kept at least one thoroughbred, Albula, which she exhibited at the New York Horse Show in 1897.

And so, it was expected that Georgie was at the reins when she and Ella went for a ride in a turnabout (a small, two-seat buggy) near the Long Branch cottage on a Wednesday afternoon in 1893.  The New York Times reported, “a reckless hack-driver dashed into their turnout, completely smashing one of the wheels.  At the same instant their affrightened horse started to run away.”  Ella was tossed out of the wrecked vehicle, hitting her head.  Courageously, “Georgie clung to the reins and was dragged some distance before the horse was brought to a standstill.”  Ella was more seriously injured and was taken to the Monmouth Memorial Hospital.

A hysterical servant caused uproar up and down the 72nd Street block on November 5, 1898.  The New-York Tribune reported, “Dense volumes of smoke pouring through the bedrooms and coming from the pantry in the rear of the house awakened the feminine portion of the family of Parker B. Whitcomb…at 1:30 o’clock this morning.”  The New York Morning Telegraph said that Charles F. Bates “heard shouts apparently coming from the residence…He also heard pistol shots, cries of ‘murder’ and shrieks of ‘fire.’”

Ella was tossed out of the wrecked vehicle, hitting her head.  Courageously, “Georgie clung to the reins and was dragged some distance before the horse was brought to a standstill.”

Bates ran down the street to a watchman, whom he instructed to turn in a fire alarm (that covered the shouts of “fire”).  Down the block he found a policeman, whom he told that a murder had been committed in the house (thus taking care of the “murder” screams and the pistol reports).  And then he saw a Black man running from the vicinity of the Whitcomb house.  The New-York Tribune reported, “The sounds of the commotion inside the house and the hurried exit of the negro could mean but one thing, Mr. Baldwin [sic] decided.  ‘Burglars! Burglars! Stop thief!’ he yelled.”

Bates captured the man (who was the Whitcombs’ butler) half a block from the house.  “The butler tried to explain that the house was on fire, but Baldwin held him fast, shouting for the police meanwhile.”

The pistol shots Bates had initially heard came from the window of Louis A. Lehmaier, at 159 West 72nd St.  When he, too, heard the commotion, he had fired his gun to arouse the attention of police.  As the fire department and the police department converged on the block, Lehmaier shot off another round of shots into the air.  “Their reports only added to the agitation of the women in the burning house,” said the New-York Tribune.  “Bedlam seemed to have broken loose in the quiet block.”  The female servants ran to the street in their nightclothes, while the fire fighters rushed in.  The article said, “the blaze was extinguished with but small loss.  The great part of the damage was due to the dense smoke that filled the house.”

As passionate as Georgie was for horses (in 1903 she appeared in court to testify against an instructor at Durland’s Riding Academy, whom she and a friend charged with cruelty), she was more devoted to her house pets.  In 1908 her father returned from England bearing a black and white Japanese spaniel named Blossom “from famous kennels outside of London,” according to the New York Herald.  “He presented Blossom to his daughter Georgiana, who already had two handsome Pomeranians and a magnificent Angora cat whose coat is the texture and color of fine chinchilla fur.”  Those animals now took backstage to the newcomer.

Three years later, on November 12, 1911, the newspaper updated its readers.  “Blossom is being treated like a princess of royal birth.  The black and white spaniel is practically mistress of the mansion.  She is never left along with the servants—and there are several in the corps required to manage the large establishment—and she is never permitted to eat anything which has not been especially selected and prepared for her appetite.”

Georgie personally did the shopping for Blossom—most often lamb chops.  When the family went to Europe or to Long Branch, Ella, who was now married, moved back in.   (It was feared that a voyage might give Blossom a chill, which could result in illness.)

A reporter asked Ella “But you must have found it rather irksome to have to stay in town on account of the dog.”  She replied, “Not at all.  We are devoted to Blossom and love her as one of the family.  We kept the house open all summer on her account.” 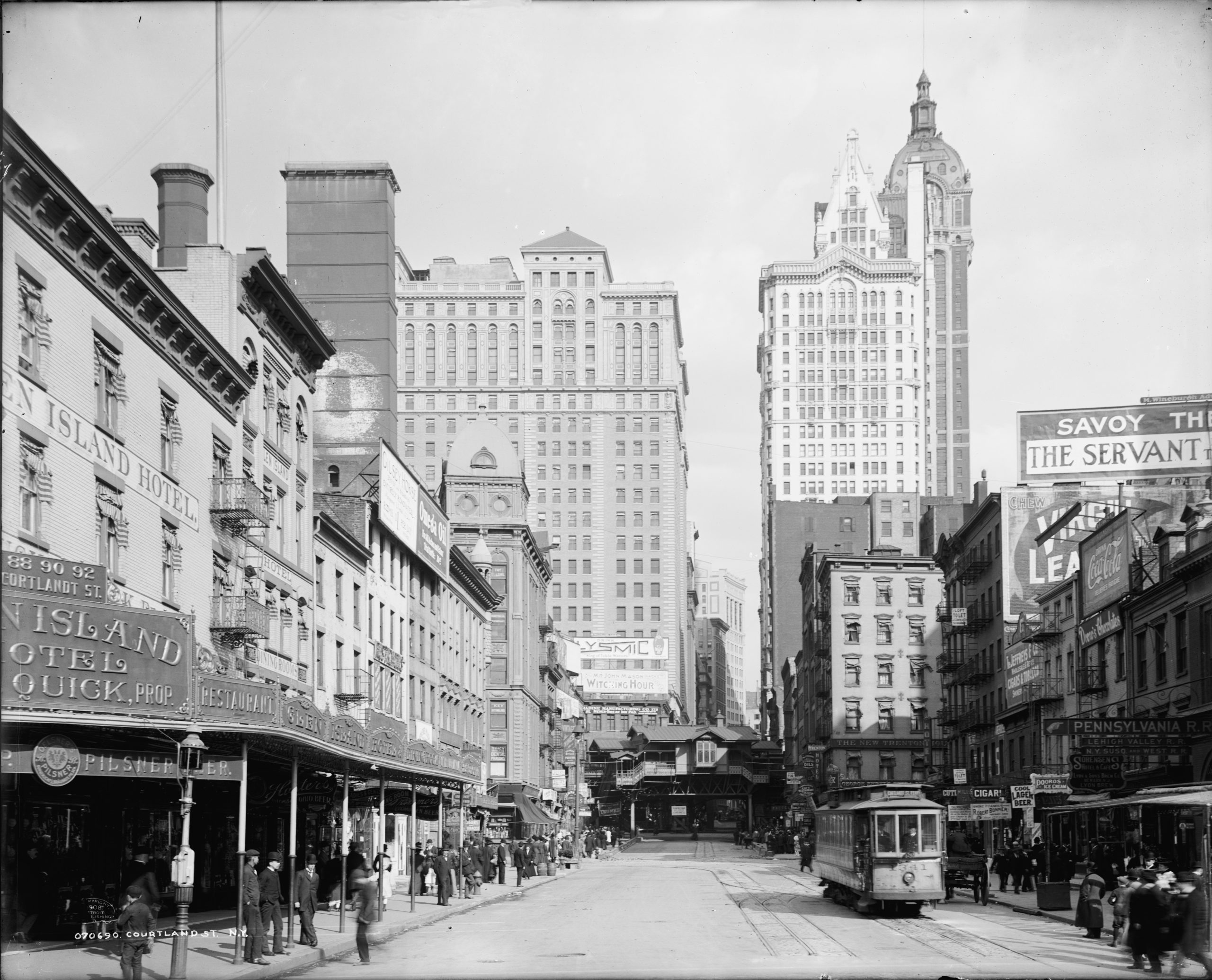 Whitcomb fought a battle against the Government in 1912.  On November 39 The Journal of the American Medical Association reported, “Park R. Whitcomb, who traded as ‘Prof. W. H. Peeke, F. D., New York,’ sold a nostrum which the federal chemists declared was essentially a solution of sodium bromid[e] and ammonium carbonate in water.  Whitcomb claimed that his stuff was a cure for epilepsy and fits.  The Government declared, on the contrary, that it was not and that his claims were false and fraudulent and made knowingly and in reckless and wanton disregard of their truth or falsity.”  In the end, Whitcomb pleaded guilty and was charged $50.

What his family and the other affluent residents along West 72nd Street did not know was that Whitcomb was leading another, more sordid life.   He anonymously frequented the Glen Island Hotel on the corner of West Street and Cortlandt Street.  An employee there said he “was known at the hotel, but not by name.”

On February 28, 1916, Whitcomb took a room.  He was careful not to carry any identification with him.  His body was found there that night.  Initially police suspected foul play, however the Weekly Drug Markets reported “Nothing in the room was disturbed, and his jewelry and money, of which he had considerable, were intact.”  A doctor from the Hudson Street Hospital diagnosed a heart attack.

His identity was learned only after police found a safe key on his key ring, with a serial number.  The Marvin Safe Company said it had been issued to Whitcomb.  “Later,” said the New York Herald, “Miss Whitcomb called at the hotel, accompanied by a man friend of the family, and identified the body as that of her father.  It was sent to the home.”

Georgie and Ella became copartners in the W. H. Peeke Company.  The product did not change (nor improve) and in 1935, the Government issued a cease-and-desist order for marketing practices that “confuse, mislead, or deceive purchases.”

In the meantime, the family sold 161 West 72nd Street in 1922.  Parker Whitcomb’s private library was sold at the Plaza Art and Auction Rooms on April 7, the ad listing items like “rare Audubon editions” and “standard sets in rare and fine bindings.”  A two-day auction of the rest of the house’s contents was held on May 7 and 8.

Architect Robert F. Lyons was commissioned to renovate the former mansion to a two-story commercial space with apartments above.  The stoop was removed, and an extension erected to the property line.  The store was leased to Edith Rand, “who will deal in antique furniture,” according to the New York Herald on December 11, 1922.  The article added, “This is the first establishment in the Seventy-second street zone of a furniture business.”

Whitcomb was leading another, more sordid life.   He anonymously frequented the Glen Island Hotel on the corner of West Street and Cortlandt Street.

The tenants in the apartments were well-heeled, if sometimes a bit odd.  Grace Ellery Williams was an early resident who ran her consulting business from her apartment.  She described herself in an advertisement on November 21, 1925 as “astrologer and life counsellor” and asked “How are you vibrating to the Music of the Spheres?”

Broker B. D. Sokolow and his family were also early residents.  He was less than discreet when he had his barber come to the apartment to shave him late in 1925.  The barber testified in court on February 19, 1926, that “a woman other than [Solokow’s] wife appeared from under the covers.”  It was a public humiliation for Mrs. Blanche Sokolow, who had previously been married Harold Smith, and again to stockbroker, Milton A. Prince.  Prince adopted Blanche’s son from her first marriage, Harold, Jr.  Despite the many upheavals in his early life, Hal Prince would go on to become one of America’s best-known theatrical producers.

Irving Halper lived here in September 1937 when he was arrested on a charge of vagrancy at the corner of Broadway and 72nd Street.  It was the latest in a string of arrests—seven to be exact—on various charges including narcotics peddling.  He told police that “he had not worked for two years, but that his occupation was ‘gambling,’” according to The New York Times on September 5.

Now he was in deeper trouble.  The body of Esther Gordon, whose late husband had sold narcotics as well, had been found stuffed in a barrel in Queens.  Halper was implicated in the murder.  Thankfully for him, he was not picked out of a line-up, and he was cleared of suspicion in the murder.  Nevertheless, said The New York Times, Halper was held for further hearing next Friday on the vagrancy charge.”

That same year, in December, the West Side Pet Shop moved into the ground floor.  Over the ensuing decades it would be home to Art Insights Gallery, here in the mid-1990’s, Straight from the Crates at the turn of the century, and Aroma Espresso Bar in both commercial levels in 2009.  That business closed in 2018 to be replaced by Israeli chef Eyal Shani’s Miznon North.

Shop local to support the business currently at 161 Columbus Avenue: