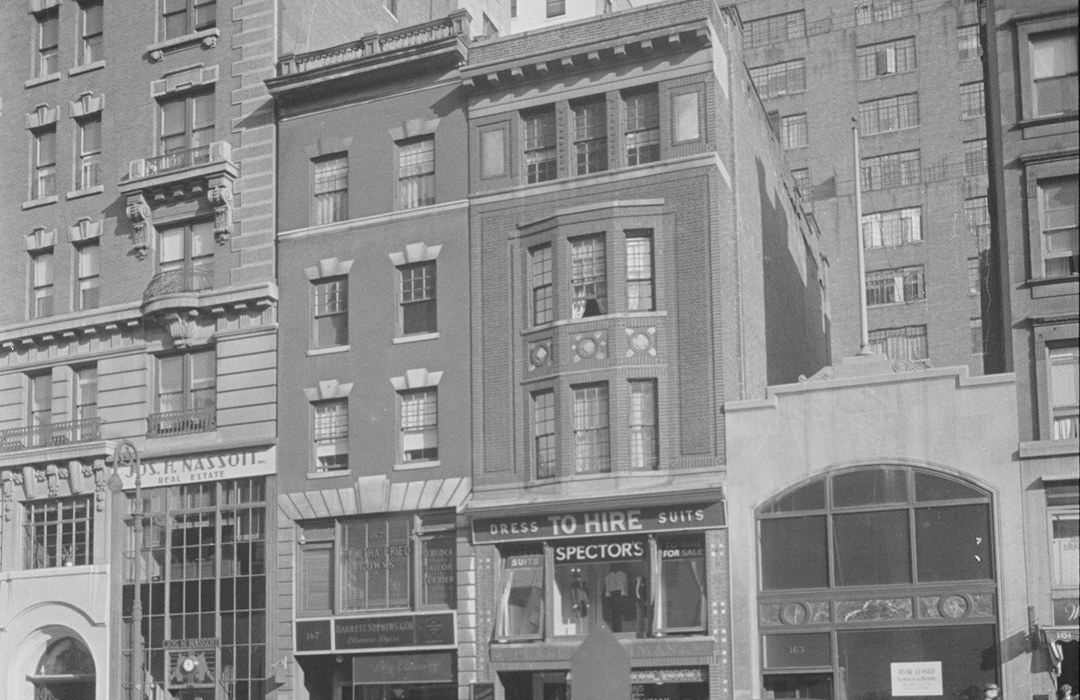 Brothers David and John Jardine were prolific in the Upper West Side in the last decades of the 19th century.  They were responsible for scores of speculative rowhouses, among them ten upscale residences for developers James R. Smith and Cornelius W. Luyster on West 72nd Street between Columbus and Amsterdam Avenues, begun in 1883.

The avenue-wide street was quickly developing into one of the area’s most fashionable, and within a few years would be known as the “Queen of Streets” on the Upper West Side.  D. & J. Jardine’s row was designed in the newly-popular neo-Grec style.  Faced in brownstone, they rose four stories above the high English basement.

The Murphys had an interesting houseguest in the fall of 1896.  Katherine McIntosh, according to The Call on November 14, was “better known as Sister Katherine, a talented Scotch girl on the staff of the Civil hospital” in Hong Kong.  The newspaper went on, “Sister Katherine is a tall, fine-looking and intellectual woman of commanding presence and charming address.”  A reporter from the New York Mall and Express visited the 72nd Street house to hear her horrifying report.

His article began “This is the story of the black plague which three years in succession has attacked the great city of Hong Kong, and which, unless stamped out, will make that metropolis a city of ruins before another decade has passed.”  Katherine McIntosh stressed that “Up to 1894 there was a popular delusion that the black plague which decimated Europe at least twice had become extinct.”  It was rampant in parts of Asia at the time, she warned.

Like all wealthy couples, the Murphys spent much time away from the city, especially in the summer months.  On March 10, 1897 The Evening Telegram announced “Mr. and Mrs. C. C. Murphy, of No. 165 West Seventy-second street, will go abroad early next month, to remain until next autumn.”

Katherine McIntosh stressed that “Up to 1894 there was a popular delusion that the black plague which decimated Europe at least twice had become extinct.”  It was rampant in parts of Asia at the time, she warned.

By the turn of the century the once-genteel residential street had noticeably changed.  As was the case with the avenues, the broad width of 72nd Street lured businesses which transformed or replaced the houses. In 1909, Henry Hollister Pease purchased the former Murphy residence and hired architect Alfred H. Taylor to completely remodel it.

Pease was a partner with Lawrence B. Elliman in the real estate agency Pease & Elliman.  On February 25, 1909, the New York Herald reported that Taylor had filed plans “for enlarging the five story dwelling at No. 165 West Seventy-second street and making it over into a six story bachelor apartment house with two stories of stores.”  The alterations cost $18,000, or just over half a million today.

The change from a five- to a six-story building did not mean an additional floor; it simply meant that the removal of the stoop made the former basement level an official story now.  Taylor stripped off the brownstone and pulled the façade forward to the property line.  He created a striking Arts & Crafts style building faced in brick above the two-story storefront and decorated with a profusion of remarkable terra cotta tiles.

The two-story midsection featured an angled bay, its spandrel panels inset with tiles.  Two veined stone panels flanked the triple openings of the top floor, below an overhanging bracketed cornice and parapet.  As eye-catching as Taylor’s cutting-edge architecture was, its overall design vied for attention with the tiles, manufactured by the Moravian Pottery & Tile Works.  Artisan Henry Chapman Mercer handcrafted the tiles in the earthy colors associated with Arts & Crafts movement.  Intricate Celtic knots, depictions of medieval lions and knights, and stylized flowers decorated individual tiles.  Above the ground floor storefront a long panel depicted a feudal town in the Biblical inscription Letificat Civitatem Dei, or “Makes Glad the City of God.” 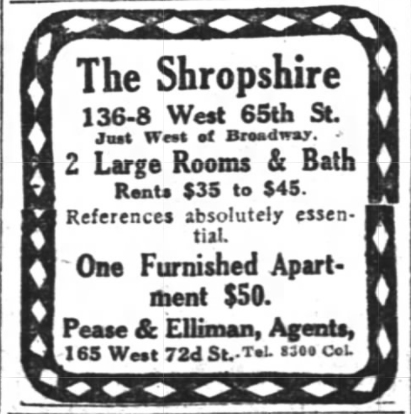 By the mid-1920’s, however, Pease & Elliman had relaxed the restrictions, allowing females to rent apartment, as well.  At a time when most unmarried young women would seek lodging at a women’s residential hotel, 20-year old Thelma Hall confidently rented an apartment in No. 165.  On Wednesday August 11, 1926 she escaped the city by heading to Long Beach, Long Island.  She nearly did not return.

At around 5:30 that afternoon she was swimming in the heavy surf far from the shore when she realized she was in trouble.  She shouted for help and, luckily Dr. Charles F. Pabst, heard her although he was some distance away.  By the time he reached her, she had gone under twice.  A lifeguard got to the pair within a few minutes and the two men managed to get Thelma’s unconscious body onto the sand.  The Greenpoint Weekly Star reported “A pulmotor was used to revive the girl and it was thirty minutes before she regained consciousness.”  Thelma was taken to the Castle Baths to be treated for shock.

At around 5:30 that afternoon she was swimming in the heavy surf far from the shore when she realized she was in trouble.  She shouted for help and, luckily Dr. Charles F. Pabst, heard her although he was some distance away.

In 1975, Judith York Newman opened Spaced: Gallery of Architecture on the second floor, above a Jewish delicatessen.  It was the first gallery in New York City devoted exclusively to architecture.  At a time when most galleries were located on the East Side, The New York Times architectural critic Paul Goldberger beamed “where else but in New York could one ascend a stair past the smell of pastrami to a room devoted exclusively to the display and sale of architectural drawings.”

Goldberger was back in July 1979 to view the gallery’s exhibition of modernist Paul Rudolph’s architectural drawings.  He viewed the architect’s work as being as much art as draftsmanship.  “Mr. Rudolph has a gift for composition and lyrical line that distinguished him from most of his colleagues,” he wrote on July 5.

Newman’s choice of subject for the exhibitions in Spaced was carefully thought out and diverse.  In February 1982 she launched an exhibition of “more than 40 plans, representing architectural creations from Versailles to the present,” as announced in The New York Times.

Newman closed Spaced: Gallery of Architecture in 1983 and reopened it sixteen years later in another location.  Room Plus, a furniture store targeting apartment dwellers was in No. 165 by 1984.

Alfred H. Taylor’s ground floor storefront was significantly altered in the last part of the 20th century and a renovation destroyed the panel between the first and second floors, which was still in place as late as 1997.  But, astoundingly, much of the tilework survives; an easily overlooked architectural treasure.