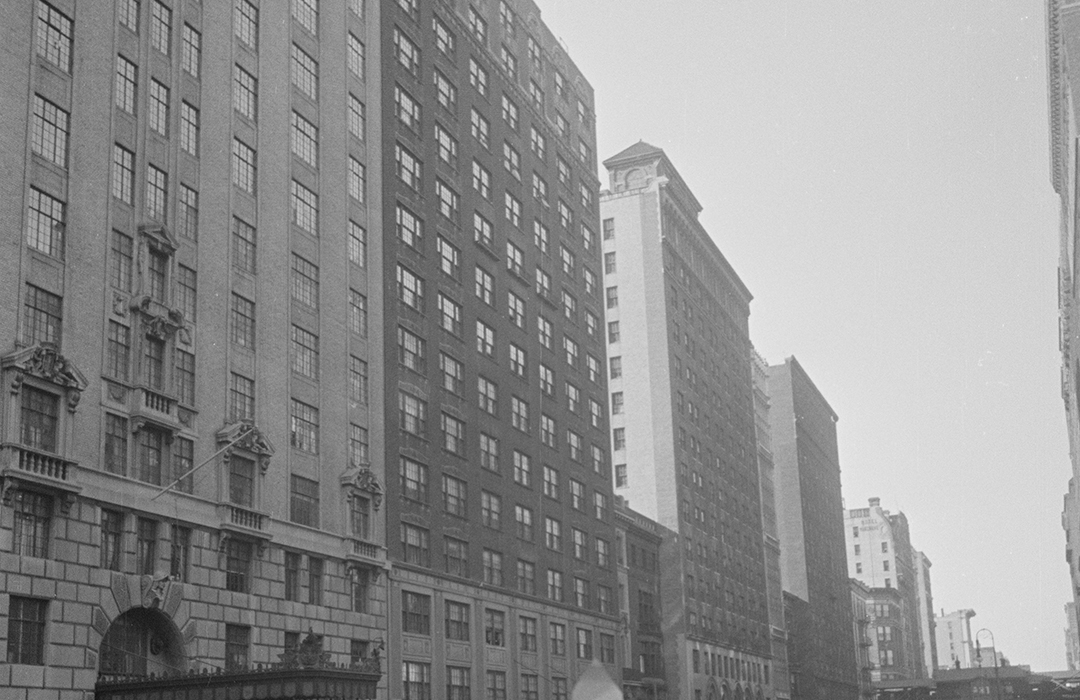 Peaches, Daddy and “The Brain”

In 1925 developer Louis Laraelson formed the 20-28 West 72nd Street Co. and purchased the five brick rowhouses at 20 through 28 West 72nd Street near Central Park. Architect Herbert Knapp was commissioned to design an apartment hotel on the site. The 15-story structure, designed in the neo-Renaissance style, was completed the following year. Called the Fairfield Hotel, the bottom three limestone-faced floors of its sparsely decorated façade included a rusticated base and double-height fluted pilasters. There was little decoration on the brick upper portion until the upper three floors where stone carvings, particularly the arched tympani of the parapet, provided interest.

Apartment hotels differed from apartment buildings in that there were no kitchens in the apartments. The Department of Buildings emphasized that upon the building’s opening by noting “No cooking to be done in any apartment.”

One of the first–and most colorful–of the residents was real estate developer Edward West Browning. Among the structures he erected was the 30-floor World Tower Building on West 40th Street. The 51-year-old married Frances Belle Heenan, whom he called “Peaches,” on June 23, 1926. The bride was just 16-years old.

One of the first–and most colorful–of the residents was real estate developer Edward West Browning. The 51-year-old married Frances Belle Heenan, whom he called “Peaches” on June 23, 1926. The bride was just 16-years old.

The couple moved into the Fairfield Hotel and within a year Frances sued for divorce. Newspapers, which eagerly reported Peaches’ testimony word-for-word, referred to the defendant as “Daddy Browning.” And there was more than enough fodder for the press. While Browning explained that he took Peaches shopping in his blue limousine and “took her to every show in town, to dances and social functions,” she accused him of keeping a live goose in the bedroom, forcing her to remain nude in the apartment, and tossing telephone books at her. (As it turned out, the courts decided that Frances had abandoned her husband “without cause.” She went on to become a vaudeville actress.)

In 1927 the Fairfield Hotel was owned by racketeer Arnold Rothstein, known among the Jewish mob as “the Brain.” He sued the city in December that year to allow cooking in the apartments. In his complaint he maintained “that the tenement house law prohibiting cooking in serving pantries was ineffective because city officials have permitted it since 1901.”

In May 1928 the building received a somewhat surprising tenant. The New York Sun reported that the radio station “WPCH is to be moved again. Today will find it, bag and baggage, packed off to new studios on the sixteenth floor of the Fairfield Apartment, 20 West Seventy-second street.”

In the meantime, Arnold Rothstein was running the largest bootlegging operation in the nation. Managing his gambling and liquor empire was a boyhood friend, Samuel Stein, alias Staijer. Rothstein provided him an apartment in the Fairfield. Their close relationship was evidenced on July 17, 1928 when detectives arrested Staijer and four other men on narcotics charges at a hotel on Broadway. The Times Union reported “Rothstein, breaking an iron clad rule never to appear in court personally, appeared at the bar and gave $10,000 bond” for Staijer.

On November 4, 1928 Rothstein was fatally shot during a business meeting at the Park Central Hotel. Two weeks later detectives arrested Samuel Staijer after they received a tip that he was about to leave the city. He was taken into custody as a material witness in the murder case. 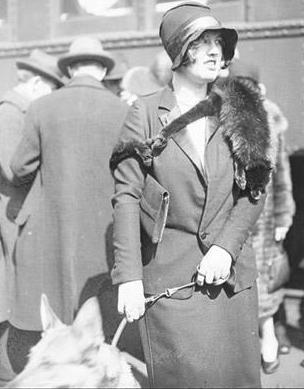 Cosmograph of "Peaches" and "Daddy"

As investigators combed through Rothstein’s business papers for evidence, The New York Evening Post reported on December 10, 1928, “Another safe of Rothstein’s has been discovered. It was in a storeroom on the roof of the Hotel Fairfield, 20 West Seventy-second Street, of which he was major owner…Representatives of the District Attorney and of the United States Attorney will co-operating in going over these documents carefully.”

Three months later The New York Times reported that the “furniture and furnishings of the Hotel Fairfield…for which the late Arnold Rothstein, gambler and owner of the hotel, paid $100,000, will be sold for $40,000.” The building, too, was sold to liquidate Rothstein’s estate. Possibly to erase any connections to the mobster, the new owners rechristened it the Hotel Franconia.

The building continued to be home to well-to-do residents, like Louis I. Feis, a general agent for the Northwestern Life Insurance Company since 1916; Minna Saumelle, who taught diction and languages at the Julliard Graduate School of Music (she taught French, German, Italian, Spanish and the Scandinavian languages); and Magistrate H. Stanley Renaud.

Another well-known resident in the 1930’s was Dr. Heinrich Neumann and his wife, Melitta. Dr. Neumann was one of the world’s foremost authorities on diseases of the ear and he listed among his patients King Edward VIII of England and King Alfonso XIII of Spain. On March 19, 1937 The American Hebrew said he “not only treated rulers and statesmen but also members of all classes in his clinics, and in his private office. He especially treated many needy persons who, as a rule, in addition to medical advice received medicine and even money from him.”

Despite its preponderance of highly respected tenants, the change of ownership and name of the hotel had not eliminated organized crime from the building. Resident Simon Hirshbert had been “lieutenant” to gangster Irving Wexler, alias Waxey Gordon, during the Prohibition years. The Sun said Wexler “was referred to most commonly as the ‘beer baron.’”

During World War II the Government imposed strict restrictions on items like wheat, silk, butter and sugar. As Prohibition had done, it presented a fertile opportunity for illegal sales. On December 30, 1942 Waxey Gordon and Simon Hirshberg were arrested for “heading a ‘black market’ conspiracy in sugar.”

Owner Jerome Belmut converted the Franconia Hotel to official apartments in 1950. The New York Times reported that it “contains 283 rooms laid out in 160 apartments of one, two and three rooms with bath. It has a penthouse and restaurant.”

Dumasais Estime and his wife moved in in November 1952. He had resigned as the president of Haiti in 1950 when a three-man military group seized control of the government there. The 53-year-old died in his apartment in July 1953.

Despite its preponderance of highly respected tenants, the change of ownership and name of the hotel had not eliminated organized crime from the building. Resident Simon Hirshbert had been “lieutenant” to gangster Irving Wexler, alias Waxey Gordon, during the Prohibition years. The Sun said Wexler “was referred to most commonly as the ‘beer baron.’”

Another renovation completed in 1967 carved a restaurant a retail space into the ground floor along with existing doctors’ offices.

A colorful tenant at the time was entertainer Sid Gary, who was formerly the vaudeville partner of George Burns. The New York Times said that he “danced, sang and double-talked his way through the vaudeville circuits.” During his time in the Franconia he often appeared on cruise ships. On April 3, 1973 the 72-year old was walking along Central Park West at 60th Street when he suffered a fatal heart attack.

The restaurant was home to Hisae’s in the 1980’s, one of what The New York Times columnist David W. Dunlap called Hisae Vilca’s “little empire of Oriental-Continental restaurants.” By 1986 she had over-stretched herself, getting little sleep and besides, she said, “Oriental is no longer that exotic. New Yorkers want something new all the time.” The space would subsequently become home to Sambuca Restaurant, and then, in 2015, the Ribbon restaurant.