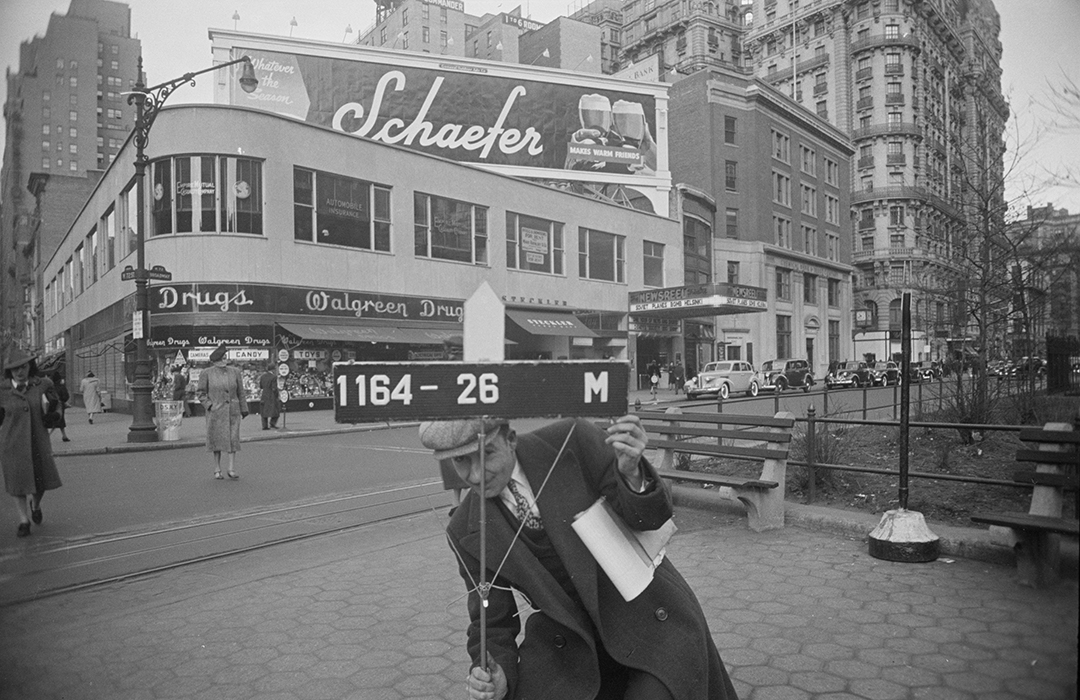 Sticky Fingers from Hotel to Theater

At an auction sale on January 15, 1886, real estate operator Robert Robertson purchased the entire 225-foot long Broadway blockfront from 72nd to 73rd Street.  He paid $232,500 for the vacant parcel—more than $6.5 million today.  Although the Upper West Side was experiencing rapid development, many in the real estate industry thought his purchase foolish.

Robertson sold the northern portion of the property to the Rutgers Presbyterian Church and announced plans to erect a residential hotel on the 72nd Street corner.  He contacted every prominent hotelier in New York as a potential proprietor and was repeatedly rejected.  The Record & Guide later recalled “Finally, when calling upon Ferdinand P. Earle, he remarked: ‘Why, that location is way out in the country.”  Undaunted, Robertson told him, “When you are driving, Colonel Earle, please look over the ground.”  Earle eventually did and Robertson had his proprietor before the first brick was laid.

Plans were filed in November 1893 and the Hotel St. Andrew was completed the following year.  Normally rooms would be set aside for the hotel staff, but, according to The Record & Guide, the hotel “was so remarkably successful that [Robertson] was obliged to rent apartments outside to house his various employees.”  The Sun reported that the St. Andrew was “the only fire proof hotel on Broadway north of Fifty-ninth street.”  A residential hotel, the St. Andrew did not accept transient guests, but rented suites to permanent residents.  The difference between it and an apartment house was that suites did not have kitchens (residents took meals in a posh dining room with other tenants), and maid service and similar amenities were provided by the management.

Mrs. Louisa J. Black’s attorney, L. H. Beers, managed her estate and collected her rents.  Now he told the courts that she was insane and moved to legally take over her finances.

Among the wealthy tenants in 1910 was Mrs. Louisa J. Black and her adopted daughter, Mary Louise Black.   She had long been estranged from her husband, James, and lived off the income of her sizable real estate holdings, valued at nearly $6 million in today’s money.  The New-York Tribune mentioned on December 28 that year, “Mrs. Black, who is now sixty-four years old, used to spend much of her time in Europe.”

The comment had to do with a disturbing turn of events in Louisa’s life.  Her attorney, L. H. Beers, managed her estate and collected her rents.  Now he told the courts that she was insane and moved to legally take over her finances.  Whether she was or not was a matter of contention.  The disposing of unwanted relatives or clients in the 19th and early 20th century in order to take control of their money was commonly accomplished by committing them to an asylum.  Beers told the court that James Black had not been heard from for 12 years.  The judge appointed a committee to determine Louisa’s mental condition.

The day after the news of the proceedings were published in the newspapers, James Black suddenly surfaced.  He had a valid interest in the case, since he was Louisa’s heir.  The New-York Tribune reported on December 29, “The only other heir at law besides the husband is Mary Louisa Black, whom the incompetent adopted in 1894.  She is entitled to two-thirds of the estate of Mrs. Black on the latter’s death.”  Black understandably objected to the committee, which was composed of members of L. H. Beers’s firm.  In the end, Louisa was deemed fully sane and she took back the management of her real estate holdings. 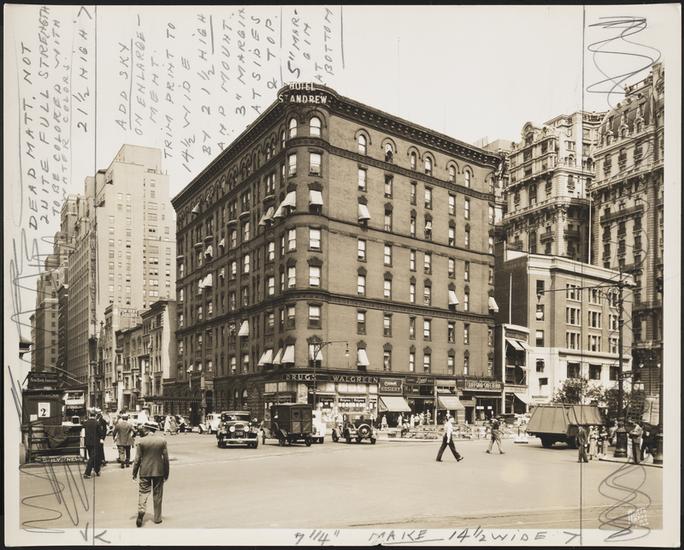 Image Courtesy Museum of the City of New York, ca. 1934

In 1912 the St. Andrew was purchased by Morris Schinasi, who made significant modernizations to the property.  The ground alone on which the hotel stood was valued assessed at $950,000—a 75% increase since Robertson had purchased it.

The St. Andrew continued to house upscale residents, like Frances S. Barnes who lived here at the time.  On November 15 that year the elevator boy, Harry Willis, took her downstairs and then, knowing that the unmarried woman’s apartment was unoccupied, went back with a passkey.  He pocketed 13 pieces of jewelry worth $163,000 today.  He then pawned it at what The Sun called James Prichard’s “hole in the wall pawnshop” on West 42nd Street for $700.  “I told him it belonged to my wife, and that she was in ill health,” he later confessed.  Frances Barnes sat in the courtroom a listened to his testimony at trial on January 9, 1913.

The following year the Hotel St. Andrew was leased to a new proprietor who announced grand changes.  The Sun reported on March 8, 1914 “Besides altering the building to some extent the hotel will have a rose garden for afternoon teas and receptions and a lounging room to be known as the art den because of the many fine paintings that will be found there.  The art den will be connected with the men’s grill on the basement floor.”  The main dining room was redecorated, and the larger private dining rooms would not be available “for invitation dances.”

The hotel received another updating following new ownership in 1916.  On September 2, 1916 The Record & Guide reported “A large amount of money is being spent on painting, redecorating and refurnishing the house, and additional bathrooms will be installed.  This will give the house 231 rooms and 147 baths.”  The extra bathrooms were necessary because another change was the acceptance of transient guests.  An advertisement in the New-York Tribune priced the rooms at $1.50 per day or, with bath, $2.00.  The more expensive rate would be an affordable $50 today.

Victorian residence hotels had fallen from favor by the Depression Era.  The heirs of Morris Schinasi decided to replace the out-of-date structure with a commercial building.  On January 2, 1938 The New York Times reported that Newsreel Theatres, Inc. had signed a lease for the “new two-story building to be erected on the northwest corner of Broadway and Seventy-second Street to replace the old St. Andrew Hotel.”  The sleek design of the multipurpose low-rise would come from the drafting tables of Schwartz & Gross, in conjunction with architect Peter Copeland.  (In addition to the theater, there would be stores on the ground floor and offices and showrooms on the second.)

The elevator boy, Harry Willis, took Frances S. Barnes downstairs and then, knowing that the unmarried woman’s apartment was unoccupied, went back with a passkey.  He pocketed 13 pieces of jewelry worth $163,000 today.

Called the Embassy 72nd Street, the theater held 550 seats and was the fourth in the Newsreel Theater chain in Manhattan.  The New York Times noted “It is hailed as another forward step in the development of the Broadway and Seventy-second Street business center.”  The building was completed before the year’s end.

On the night of October 21, 1956, the night janitor, Peter Bishop, heard noises in the manager’s office on the second floor.  He bolted out the front door and ran four blocks to the West 86th Street police station.  Detectives David Gordon, Robert McDonald, James Dougherty and James McDonnell responded.  They removed their shoes in the lobby and tiptoed up the stairway to the office.  From the opposite side of the door they “heard the familiar whine of metal boring into metal,” wrote The New York Times.  “One detective quietly turned the door knob and then they al burst into the room.”  One thief tried to grab an automatic pistol from among the burglar’s tools on the desk.  But Detective Gordon reached it first.

The article concluded “In the scuffle that followed the burglars were subdued.  They were charged with burglary, the possession of burglar’s tools and violation of the Sullivan Law.”  (The Sullivan Law was an early gun control law, in effect since 1911.)

The Embassy 72nd operated until 1988 when its doors were closed for the last time.  The New York Times recalled that it was “beloved for its foreign, offbeat and provocative films.”  In its place an apartment tower, The Alexandria, designed by the architectural firm of Frank Williams & Associates, stands today.