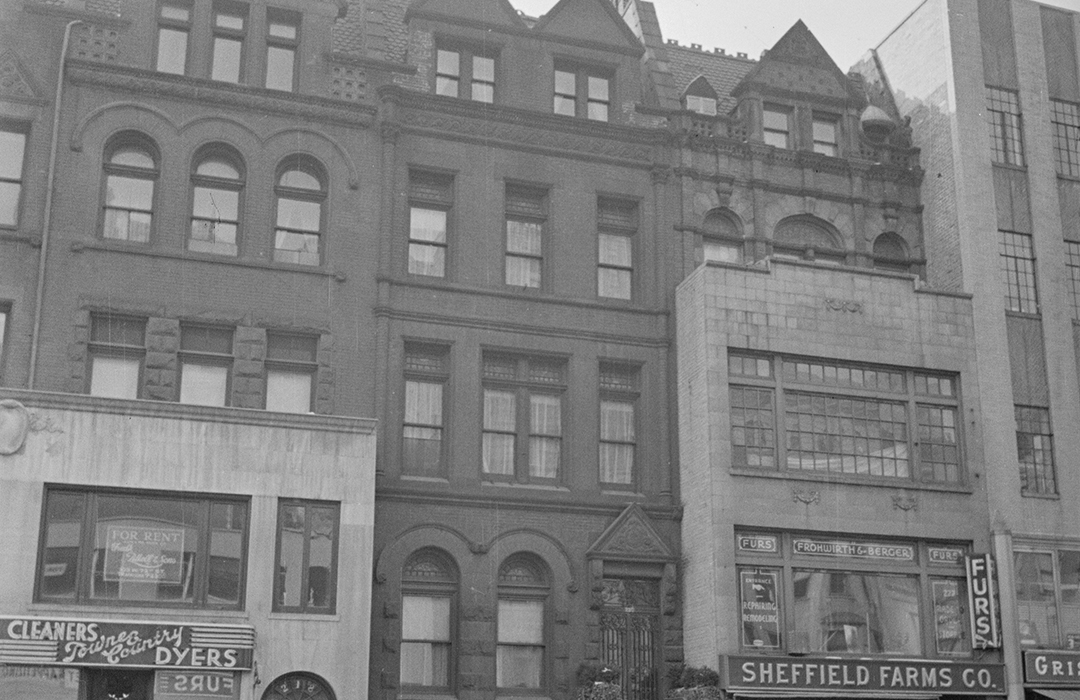 No Weddings, and Three Funerals

Architect C. P. H. Gilbert was especially well-known for creating opulent private houses.   In 1886, he designed a row of upscale homes along the south side of West 72nd Street, between West End Avenue and Broadway, for brothers William H. and Lincoln G. McCormack.  Among the group was 220 West 72nd Street, which, like its fraternal twins, was completed in 1888.

Gilbert designed the house in a mixture of Queen Anne and Romanesque Revival styles.  The rough-faced brownstone blocks of the stoop, areaway wall, and parlor level quoins were purely Romanesque, as were the arched eyebrows above the parlor windows.  But the leaded glass transoms, the pediment over the entrance, and paired gables with their triangular pediments were a nod to the Queen Anne style.

Despite the exclusive nature of West 72nd Street, the McCormack Estate was initially unable to sell the homes.  Years later, in 1900, a realtor testified “some of them stood idle for several years unrented.  We were trying to sell them at the time…No. 220 West 72d street stood idle for a long time before it was sold.”  In fact, it was not until December 1895 that the Record & Guide reported that Lincoln McCormack had sold the residence to Mrs. Charles Bentley for $58,000—about $1.82 million in today’s money.

The published aims of the group were “To awaken and strengthen by every means in its power, that Christian public sentiment which shall aid our government in its present policy of granting citizenship to Indians, and the same protection of law enjoyed by other races among us.”

The Bentleys’ residency was extremely short-lived.  By 1898, it was home to the extended Hicks family.  Ratcliffe Hicks was described by the New-York Daily Tribune as “the well-known politician, candidate for Governor [of Connecticut], and otherwise prominently known man, of Tolland, Meriden and Washington D.C.”  He was immensely wealthy and, along with the several political positions he had held, was the president of the Canfield Rubber Company in Bridgeport, Connecticut, and of the Hicks Realty Company.

Hicks’s wife, the former Isabella Wormer, had sued for divorced in April 1897, charging “intolerable cruelty.”  While she received a comfortable settlement equal to more than $1.5 million today, Hicks retained the residence in Tolland, Connecticut.  It became his summer home following the purchase of 220 West 72nd Street.

Radcliffe Hicks would not be lonely in his new townhouse.  Moving in with him were his 13-year-old daughter, Elizabeth Hicks, his sister, Emma, and her husband Hamilton F. Downing, Radcliffe’s widowed mother, Maria Stearns Hicks, and his unmarried sister, Minnie Helen.

Socialites were expected to involve themselves in charitable causes, and Emma and Minnie were especially active in the New York City Indian Association.  The published aims of the group were “To awaken and strengthen by every means in its power, that Christian public sentiment which shall aid our government in its present policy of granting citizenship to Indians, and the same protection of law enjoyed by other races among us.”  Emma was president of the organization in 1898 (and would hold the position for years) and Minnie was a manager. 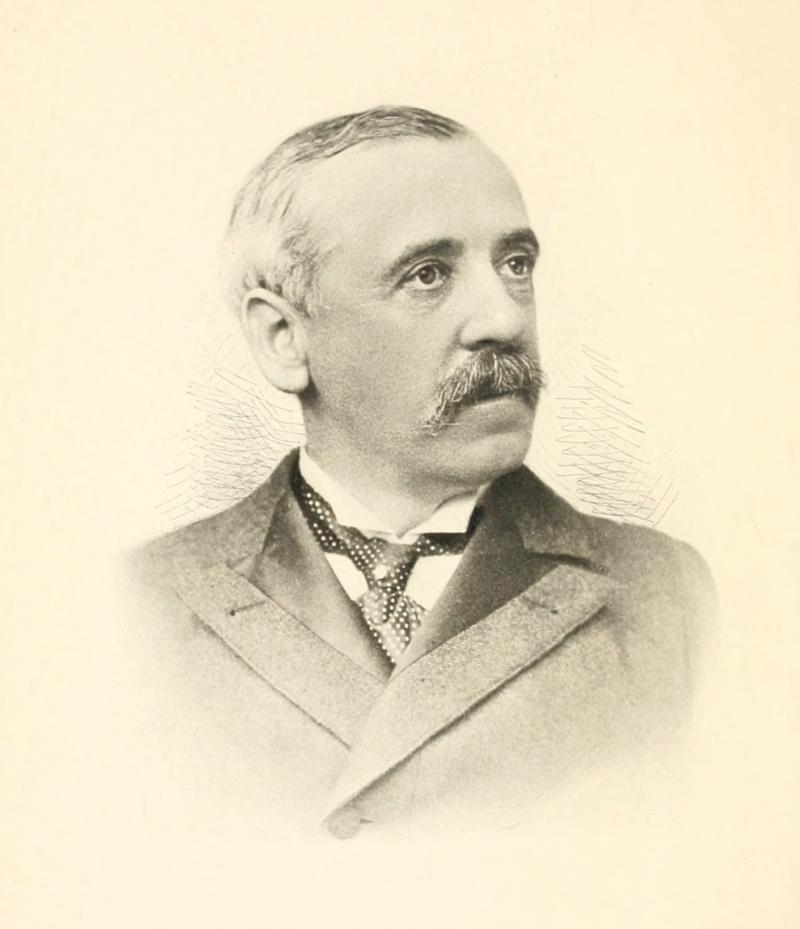 Image via “Speeches and Public Correspondence of Ratcliffe Hicks” 1896

On June 27, 1900, perhaps sensing that Minnie was not destined to marry, Ratcliffe gave her a “life lease” on the 72nd Street house.  It was an entitlement of which she would take full advantage.

Maria Stearns Hicks died in the house on August 6, 1905.  In reporting her death, The Press called her “a representative of one of the oldest families in Connecticut, and was descended from a long line of worthy and prominent ancestry.”  She was buried in Tolland next to her husband.

Ratcliffe, still in mourning for his mother, traveled to Europe the following summer.  While in Interlaken, Switzerland, he fell ill.  He died of pneumonia there on September 19, 1906, at the age of 63.  His body arrived on the Kaiserin Auguste Victoria on Monday, October 6.  The New-York Tribune advised, “The funeral will be held at the residence of the family, at Tolland, Conn., on Tuesday at 1:15 p.m.”

The rapid string of family funerals was not over.  Emma and Hamilton Downing arrived at the Tolland house prior to the funeral.  A week later, the 77-year-old Hamilton suffered a stroke and died there.

Other than the servants, the population of 220 West 72nd Street was now entirely female.  Newspapers annually followed the movements of the three unmarried women from New York to Tolland and back to New York as the seasons passed.  They remained involved in clubs and charities.  Minnie, for instance, held memberships in the New England Women’s Club, the National Patriotic Women’s Club, the New York Indian Association, the Sorosis, and the Post Parliament Club.

Minnie steadfastly remained in the West 72nd Street house as the neighborhood changed around it.  By the post-World War I years, homes were being converted for business purposes, or razed to make way for apartment buildings and commercial structures.  And so, when Minnie died in 1940 her house was an anachronism—a sort of time capsule.  But that was about to change.

The West 72d Street Realty Corp. purchased the house from the Hicks Realty Company in November 1942 for the equivalent of just $173,000 today.  The new owners announced plans to remodel it to “an apartment house with eight apartments and two stores.”  The renovations were completed in 1944.  The stoop had been removed and a two-story commercial extension built to house two stores.  There were now two apartments per floor above that.

As residents came and went from the apartments over the years, a variety of commercial tenants occupied the two store spaces.  Barbarenda, Ltd. was here in the late 1960’s and early ‘70’s.  The boutique specialized in Scandinavian fashions.  Its manager, Brenda French, told Joan Cook of The New York Times in February 1971, “We cater mostly to career girls and housewives—young, but not teenagers.”

Rising about the store extension—currently faced in a veneer of variegated tile bricks—the intact upper floors of a residences designed by one of the 19th century’s preeminent mansion architects survive.