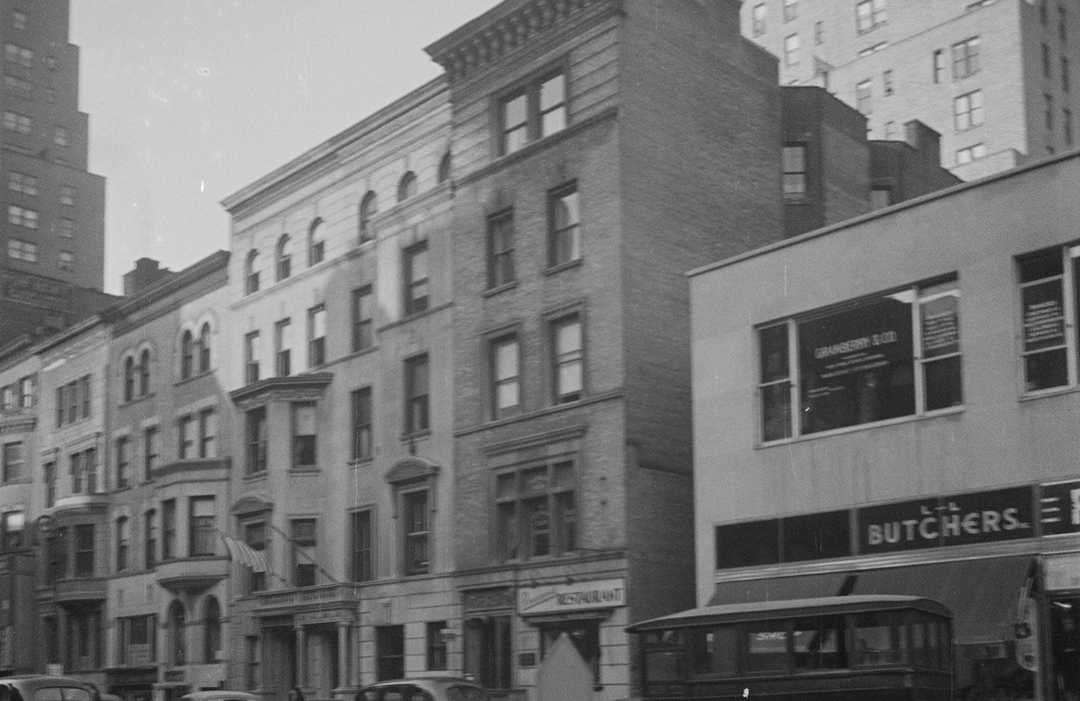 Rest for the Weary

On October 5, 1895, the Record & Guide noted that West 72nd Street was being rapidly developed “in a way that makes it the finest residence thoroughfare for its length on the West Side and, if the most aristocratic portion of 5th avenue is excepted, in the City of New York.”  At the time of the article architect and builder Henry F. Cook was responsible for designing 14 houses along West 72nd Street.

Although he often acted as his own developer (he built and designed five of those houses on his own), he was also a partner with Charles Buek in the development firm of Charles Buek & Company.  Among the firm’s ongoing projects at the time of the Record & Guide’s article was the high-end residence at 233 West 72nd Street, still under construction.

Completed in 1896, it was described in an advertisement as “a bright new 5 story 21-foot American basement house with side light.”  The term “American basement” meant that rather than sitting atop a high stoop, the entrance was located nearly at street level.  And the attraction of “side light” meant there was no building next door, affording extra sunlight and ventilation.  That would be a short-lived marketing point.

The sumptuous home was sold to German immigrant Herman Rawitser and his wife, the former Rae Granger.  The couple had two sons, Herman, Jr. and John Herman, and a daughter Theresa H.  Rawitser was president of the S. Rawister & Co., Inc. which operated wool mills in Mystic, Connecticut, and a director or officer in six corporations.

The Press reported that they found “that robbers had ransacked their house and had taken virtually everything that was movable.”  Not only had they taken Rae’s clothing and furs— “even my wife’s underwear,” according to Herman—but jewelry, artwork, and the furniture.

Herman had three brothers, Simon, Adolph and Louis.  They had all been associated in the family firm until 1877 when Adolph and Louis separated to form their own company with mills in Stafford and Meriden, Connecticut.  On July 8, 1903, the New York Herald remarked, “For thirty-one years [Louis] never allowed himself a vacation.”  A few weeks before the article he and Simon took a pleasure trip to Germany and there, on June 21, Louis died at the age of 57.  Herman had his body brought to the West 72nd Street house where his funeral was held.

The comfortable lifestyle of the Rawitsers was evidenced in a help-wanted ad on October 17, 1918: “Wanted—A competent chambermaid, to do mending and assist butler; personal references necessary.”

In the post-World War I years Theresa was a budding artist studying at the Art Students’ League when her focus turned from artistic to romantic.  On December 26, 1920 her engagement to Capt. James J. Kann was announced by her parents.  Another engagement was announced on April 22, 1922 when The American Hebrew reported that Rae Granger would marry Herman Jr. in June.

The Rawitsers were still reeling from the enormous shock they received just days earlier.  Herman and Rae had been in France and returned on April 8, 1922.  The Press reported that they found “that robbers had ransacked their house and had taken virtually everything that was movable.”  Not only had they taken Rae’s clothing and furs— “even my wife’s underwear,” according to Herman—but jewelry, artwork, and the furniture.  Rawitser was numb.  “Why, they even ate a box of dog biscuits and they broke into my wine closet…They ate and slept in the house, burnt the lights and apparently came and went as they pleased.”

The thieves had made off with every piece of silverware, including valuable family heirlooms.  “For three pieces alone, I would give $5,000 each to get back,” he said.  (It was a sizable offer, equal to more than $75,000 today.)  The Evening World opined, “The robbers apparently lived in the house unmolested for two weeks.”

West 72nd Street had changed by the time of the robbery, becoming increasingly commercial.  The theft was apparently the last straw for the wealthy Rawitsers who left before the end of the year.  Their once-lavish home was converted to rented rooms on the upper floors and Louise Morgan’s dance studio at ground level.  Louise offered lessons in “Latest Tango, Fox Trot, Waltz, Social Evening Subscription Dances.”

Among the initial upstairs residents was Wilbert A. Leonard, the night clerk at the Hotel Majestic.  He was carrying on an affair with Mary G. Roshek, the wife of department store executive Frank H. Roshek, in 1924.  When Mary sued her husband for divorce, claiming cruelty, he countered with a parade of residents— “the landlady, her husband, two waiters and a maid,” according to The New York Times who testified on her frequent visits to Leonard’s room.  One of them, Marcia Schupac, shocked the jury when she recalled the time when Leonard opened the door for Mrs. Roshek wearing only a bathrobe.

The Leonard-Roshek affair was merely the first in a string of scandalous press coverage.  Police Officer George S. V. Wandling married Claire Sagg in October 1926, but only eight months later they were in divorce court.  While Claire sobbed in court and said that Wandling was a husband “in name only,” the policeman blamed her leaving him on George H. McCauley.  In court Claire claimed McCauley “was an old family friend,” but, according to the Daily News on May 26, 1927, “she admitted, however, that he had guaranteed her lease at 233 West 72d st. and visited her there.”

Among the initial upstairs residents was Wilbert A. Leonard, the night clerk at the Hotel Majestic.  He was carrying on an affair with Mary G. Roshek, the wife of department store executive Frank H. Roshek, in 1924.

Much worse was the court case of Peggy Weil in June 1936.  She was well-known to police and had been arrested multiple times for illegal activities.  The prosecutor was especially direct in his questioning of Peggy when he asked her, “Did you ever live at 233 West 72nd Street in this city?”  “I did,” she answered.  “Did you conduct a whore house there?”  “I did,” she replied.

At mid-century, the Helaxe Company occupied the store, selling imported Swiss music boxes.  The were followed in 1953 by Levitt & Elrod, a music store.  By the early 1970’s the store was home to Plantman, described by New York Magazine in March 1973 as being “operated by an escaped social worker and a former art director.”  The store offered a variety of plants from windowsill size to four-foot palms.  Plants were replaced by music in 1997 when the Gryphon record shop moved in.  That tradition continues with Westsider Records in the space today.

Miraculously, other than the show window on the ground floor, the Rawitser house is incredibly intact.  It maintains much of its appearance from 1896 when this block was lined with similar homes of wealthy New Yorkers.