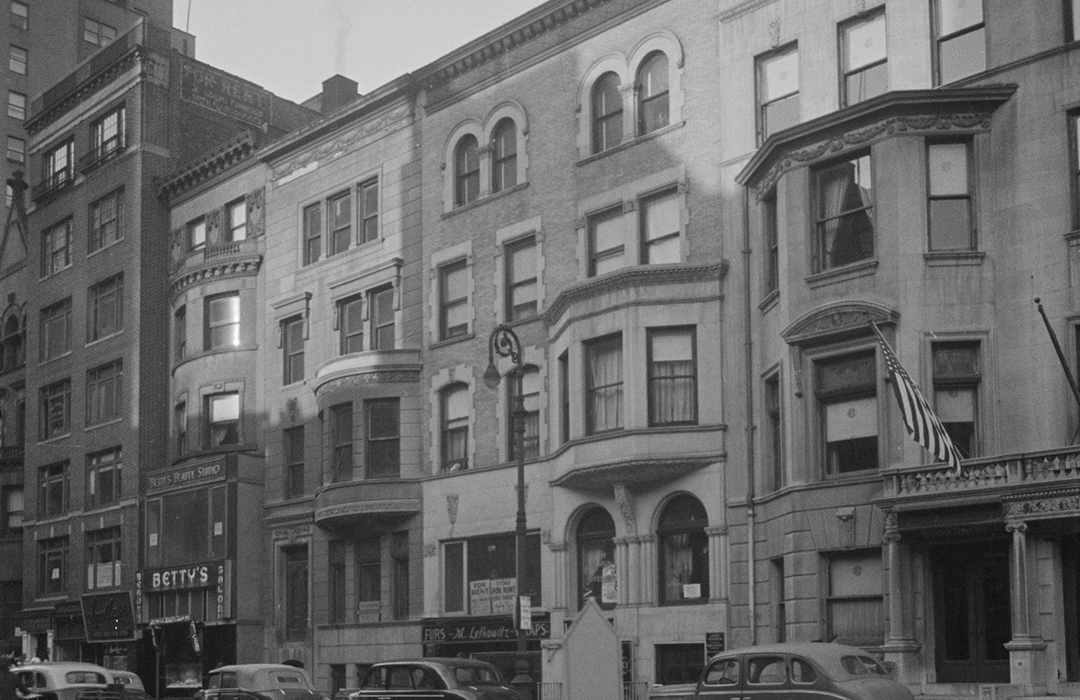 Fortune Was His Middle Name

In 1895, the prolific architect and developer Charles Buek began construction on a striking mansion at 239 West 72nd Street.  Its ample width—33 feet—would make it one-and-a-half times the width of the normal New York City residence.  In May 1896, before construction was completed, millionaire Thomas Fortune Ryan purchased the mansion.  The Real Estate Record & Guide placed the sale price at “not a great deal below $100,000.”  That amount would be equal to about $3 million today.

Ryan had made his massive fortune in tobacco, insurance, and surface railroads.  He and his wife, the former Ida Mary Barry, had seven children.  Their new home was four stories high.  A box stoop led to the arched doorway below bowed oriel half the width of the facade.  Ryan, who was an ardent Roman Catholic, had an impressive houseguest shortly after moving in.

The Right Rev. Bishop J. J. Keane, rector of the Catholic University in Washington, had been appointed an archbishop by Pope Leo XIII.  On December 5, before leaving for Rome, he “celebrated mass early yesterday morning and breakfasted at the house of his friend Thomas F. Ryan, No. 239 West Seventy-second street,” as reported by The World.

Among his several positions, Ryan was owner of the Metropolitan Street Railway Company.  Since 1893, the president of the company was Herbert Harold Vreeland.  Their business and personal relationship was so close that by November 1897, the two families shared the West 72nd Street house.  The New York Times would later explain that Vreeland “managed the financier’s business interests and played a controlling part in the various companies he owned or had an interest in.”

The Ryans’ massive wealth was exemplified in September 1919 when a special to The New York Times from Washington D.C. announced that Ida Ryan had “purchased from St. Paul’s Parish, this city, ground upon which will be erected a convent and chapel for the Sisters of the Perpetual Adoration.”  The newspaper noted, “Mrs. Ryan was seen yesterday at her residence, 239 West Seventy-second Street, and admitted that the report of her gift is true.”  The article added, “The plans for the building are now being prepared in Rome.”

On March 18, 1900, the Troy, New York newspaper The Daily Times published an article on “Three Remarkable Men.”  Each had risen from poverty to vast wealth through hard work and ingenuity.  Two of the men profiled were Thomas F. Ryan and Herbert H. Vreeland.

The article told how Ryan arrived in Baltimore in 1868, “penniless and without acquaintance in the city.”  Now he was now an owner or director in railroads, banking firms, and electrical companies.  Much of his fortune came from tobacco.  He had organized the Union Tobacco Company of America, and acquired the Blackwell Bull-Durham Company, and The Liggett and Myers Company.

Regarding Vreeland, the article said, “His father was a poor minister” and that 30 years earlier Vreeland “was one of a gang of men and boys filling ice carts on the Hudson River.”  The writer opined, “In the long list of names of men who by indomitable pluck and well directed energy have worked from the bottom to the top of the ladder the career of none is more interesting than that of Herbert Vreeland.”

With America’s entry into World War I, the Vreeland sons joined the cause.  In 1918, James F. Vreeland was promoted to captain in the Ordnance Division.  His brother Henry, Jr. was a major in the U.S. Army, and Thomas Reed Vreeland was a Second Lieutenant in the Field Artillery Section.

War did not stop Henry H. Vreeland, Jr. from finding romance.  On June 19, 1919, The Sun reported, “Word was received in this city yesterday of the engagement of Major H. H. Vreeland, Jr…and Miss Annette Baylin of Bordeaux, France.  Two months later his parents were at their country estate, Rest-a-While, in Brewster, New York, when they announced that the couple had been married at the home of the bride.

On August 10, 1919, The Brooklyn Standard Union reported on the 2,449 troops returning home on the transport vessel Mongolia.  It noted, “Major Herbert Vreeland of 239 West Seventy-second street, Manhattan, brought home a French bride he won after a courtship of twenty-five days.  She was the only bride aboard.”

It was the last year the Vreeland family would live on West 72nd Street.  In October, Carrie R. Vreeland hired architect Adolph E. Nast to remodel the house into apartments.  The significant alterations—costing the equivalent of a quarter of a million in today’s dollars—included new bathrooms, windows, rearranging of walls and new dumbwaiters.  She then leased the property to real estate operator Frank Paterno for a term of 21 years.

As it turned out, the renovations were completed just in time for Paterno.  He and his wife Helen Fay had been married for five years and lived in a luxurious home on West 113th Street.  On December 1, 1920, Helen headed for Philadelphia for a stay.  But the automobile developed mechanical problems around Newark and her chauffeur, John J. Brown, suggested they turn around rather than risk going further.

The chauffeur accompanied Helen into the residence with her luggage.  He rushed upstairs after hearing her scream.  Helen had walked into the bedroom to find her husband and a woman in bed.  On February 22, 1921, the Daily News reported, “Paterno has since taken up his residence at 239 West Seventy-second street, after surrendering the keys in West 113th street to his wife.”

The former basement level became home to the Christian Science Tutoring School of Metaphysics.  It was often the scene lectures and discussion groups. On November 18, 1922, for instance, the New York Herald advised, “Francis N. Simmons of Kentucky will lecture at the Christian Science Center at 239 West Seventy-second street Wednesday, evening at 8 o’clock.”  His topic was “The Science of Being.”

A less virtuous tenant, May C. Nolan, lived upstairs at the time.  She was arrested on November 22, 1924 for operating a house of prostitution from her apartment.

He rushed upstairs after hearing her scream.  Helen had walked into the bedroom to find her husband and a woman in bed.

Perhaps the building’s first celebrated tenant came in April 1925 when Nathaniel “Nat” Pendleton signed a lease.  A former collegiate champion wrestler, he won a silver medal in the 1920 Olympic games.  He would go on to a career acting in films and on stage.

The former Christian Science Center was home to the “exclusive” Alexandria Raymond Club, as described by the Daily News in 1928.  Women’s bridge clubs were popular at the time; however, things went wrong on February 20.  Five policemen raided the club and arrested Alexandria Raymond and her sister, Ida Broadhurst.  At the West Side Court, however, the charge of gambling was dismissed.

In fact, the bridge club was completely legitimate.  The Daily News reported that Detective William Shelly, who had led the raid, admitted in court “he knew nothing of the game” and that he “had no evidence to prove money had passed between the players and had seen no chips on the tables.”

In 1934 Frank Paterno did further renovations to the building.  The stoop was removed, and a two-story commercial front was installed, creating the potential for four retail spaces.

One of the first commercial tenants was the Aida & Billie millinery shop, which moved in in 1939.  Among the wide variety of shops over the decades included Chamois Ltd., which specialized in custom leather apparel, here in the 1970’s.  From the late 1970’s through the early 1980’s the West Side Boutique operated from one of the stores.  New York Magazine said of it on March 7, 1977, “Thousands of silver necklaces from several dozen countries…cover the walls of this small shop.”  More recently, the Ettia Holistic Day Spa, LaMode dry cleaners, Cafebee coffee shop and Floating Mountain tea house occupied the shops.